Up To $300,000 In Saskatchewan Party Donations May Be Tied To Rawlco Radio Owners

Since 2006, the Rawlinson family — headed by the CEO of Rawlco Radio, one of Saskatchewan’s largest private broadcasters — has seemingly been connected to about $300,000 in corporate donations to the governing Saskatchewan Party.

As PressProgress reported previously, Saskatchewan is one of the last jurisdictions in Canada to allow unlimited corporate donations. However, as Canadaland noted back in 2016, Rawlco is one of the few news media brands to do so.  And, the overwhelming-majority of its donations were to the Saskatchewan Party.

The National Post reported earlier this year, Rawlco Radio — which operates two talk news stations  — is “one of the biggest contributors to the Saskatchewan Party.” The Post’s analysis found the company donated more than $120,000 over the past decade.

But a review of financial disclosures by PressProgress finds the company and several related corporate entities — Rawlco Capital Ltd, Rawlco Radio Ltd, Rawlco Radio (Saskatoon), Rawlco Inc., and 565509 Saskatchewan Ltd. — appear to have donated about $306,863.34 to the party since 2006.

Rawlco did not respond to multiple requests for comment.

But documents obtained by PressProgress appear to show the donating companies have ties to Rawlco owners and executives.

The database shows who uses numbered companies to hide their donations. One example: The left is a 2016 story complaining about an unidentified Saskatchewan donor. The right reveals him as Doug Rawlinson, executive at the media company Rawlco Radio. pic.twitter.com/WaF5UZ90ZO

Looking at Rawlco’s donation figures, University of Regina Journalism Professor Patricia Elliott told PressProgress “Those amounts are high for our province, so it does stand out.”

Elliott said further “When media companies make political donations, it erodes public trust in journalism. Whether or not it actually impacts news reporting is immaterial.”

Canadian Centre For Policy Alternatives Saskatchewan director Simon Enoch told PressProgress “Even if all those editorial firewalls are working at 100 percent, the public seeing the owners of their local radio station throwing money exclusively at one political party can undermine public confidence in the independence and autonomy of the media.”

Elliott said media company owners —  like the Rawlinsons — tend to donate for the same reasons other wealthy people do. “The Rawlinsons are business people, the radio stations are their businesses. I don’t think it’s direct payback that they get out of that, more so it’s a matter of being able to tilt the table towards a favored election outcome by providing more funding to the Saskatchewan Party  — which they don’t provide to other parties.”

“He does hold some sway in the province in terms of setting a tone of debate on issues, for sure” Elliott said. “He’s a right wing talk show host and one of the more strident voices in the province.”

Rawlco describes Gormley’s show as “an important part of life in Saskatchewan.” 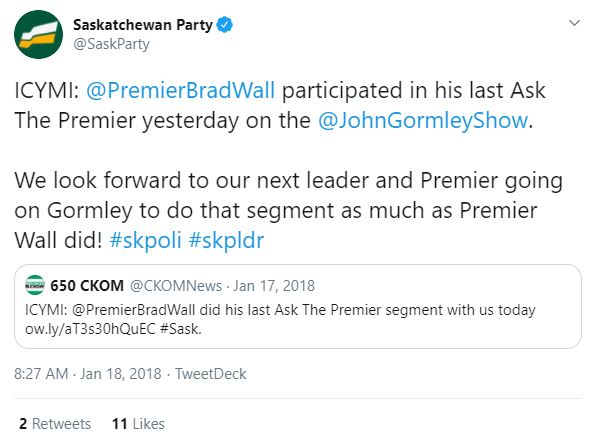 Gormley was also the host, on Rawlco’s airwaves, of  “Ask the Premier” call-in segments during the tenure of former Saskatchewan Premier Brad Wall.

Saskatchewan Premier Scott Moe hopes the April Fool’s start date of the federal carbon tax is an omen. “It’s some type of irony that the carbon tax comes in on April Fool’s,” Moe told 650 CKOM’s John Gormley on Monday.https://t.co/s9poqLeC2L

While the segment has not continued under the premiership of his successor, Scott Moe, Moe has promoted clips of him speaking to Gormley and at Rawlco studios to his social media pages.