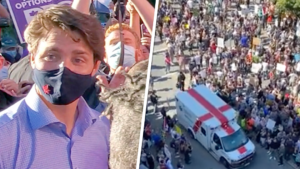 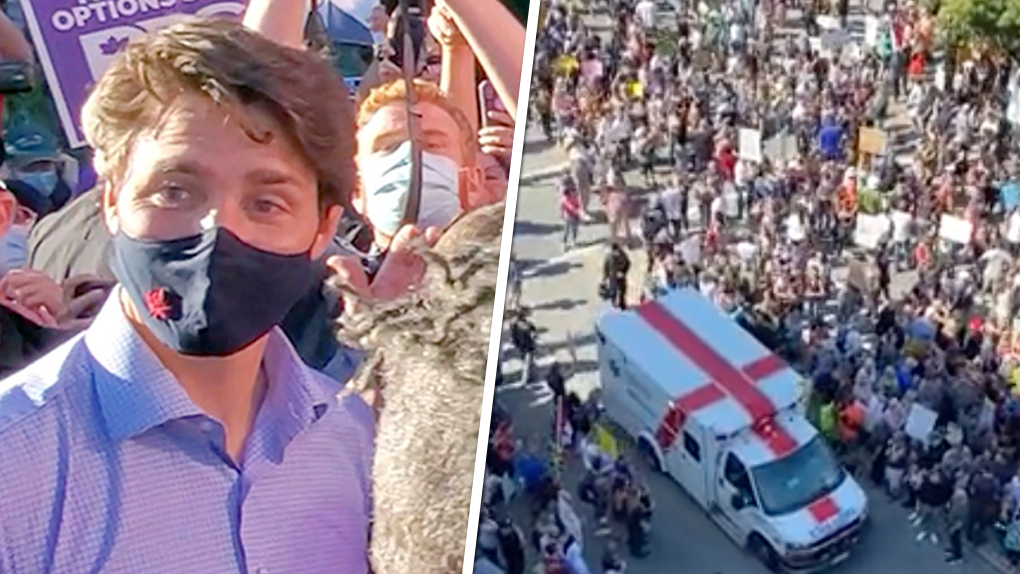 Experts who monitor extremist groups and the far-right agree recent protests targeting Canadian hospitals and Justin Trudeau campaign events are not the product of a secret conspiracy, but are instead self-organizing online.

In recent weeks, hospitals have been targeted by anti-vaccine protesters while Liberal leader Justin Trudeau’s campaign events have been repeatedly disrupted by small but vocal groups of protesters.

The protests have escalated in intensity. Health care workers have been physically assaulted and ambulances blocked. Meanwhile, Trudeau and his security detail were pelted with gravel at a campaign stop in London, Ontario.

The appearance of far-right and anti-vaccine protesters has led some to speculate that the protests are secretly funded or coordinated by partisan groups.

It’s amazing how these *protestors* always show up to disrupt Trudeau events in southern Ontario ridings that are LPC/CPC fights. 🤔 #Elxn44 https://t.co/mYpFmpWQ4Z

Experts who monitor these groups reject the theory that these are paid protesters. Instead, they point to a simpler, but equally troubling, explanation.

Here are three things you need to know:

1. Many of the protesters are the same people who have been holding anti-lockdown protests for over a year

Peter Smith, an investigative journalist with the Canadian Anti-Hate Network says many people organizing and attending protests at hospitals and Trudeau campaign events are the same cast of characters who have been staging anti-lockdown and anti-mask protests since the beginning of the pandemic.

“Just like the hospital protests last week, the demonstrations outside of Trudeau’s campaign stops are largely being attended by the same individuals seen at anti-mask / lockdown rallies,” Smith told PressProgress.

Another example: Tommy Dyer, a protester who received national media attention after appearing at an August 29, 2021 Trudeau campaign event with a sign depicting Trudeau being hung for “high treason” is a longtime attendee of anti-lockdown protests against Ontario Premier Doug Ford at Queen’s Park and linked to the far-right Yellow Vest movement which preceded it.

Dyer can be seen in video footage from Trudeau’s campaign event in Cambridge calling a Black police officer the N-word. 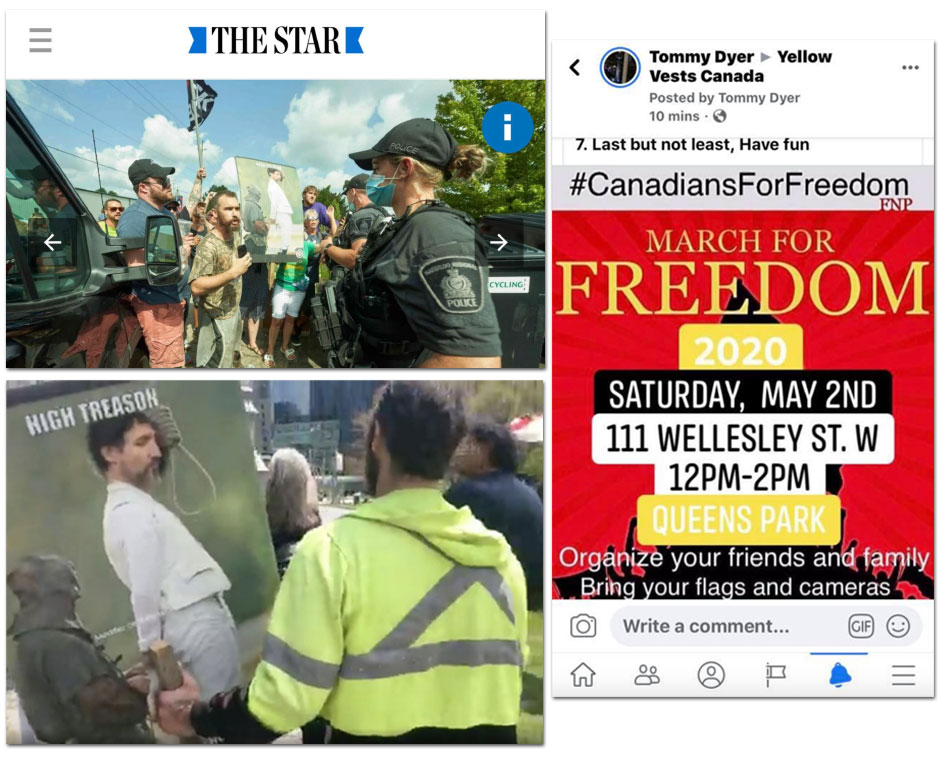 2. The protesters are a ragtag mix of far-right fringe groups

Another thing experts say is important to understand is that the protesters are a diverse and heterogeneous mix of far-right fringe groups who subscribe to a range of extreme views.

The Canadian Anti-Hate Network has identified known white nationalists and numerous individuals affiliated with the People’s Party of Canada at a September 6 campaign stop where Trudeau was pelted with gravel. 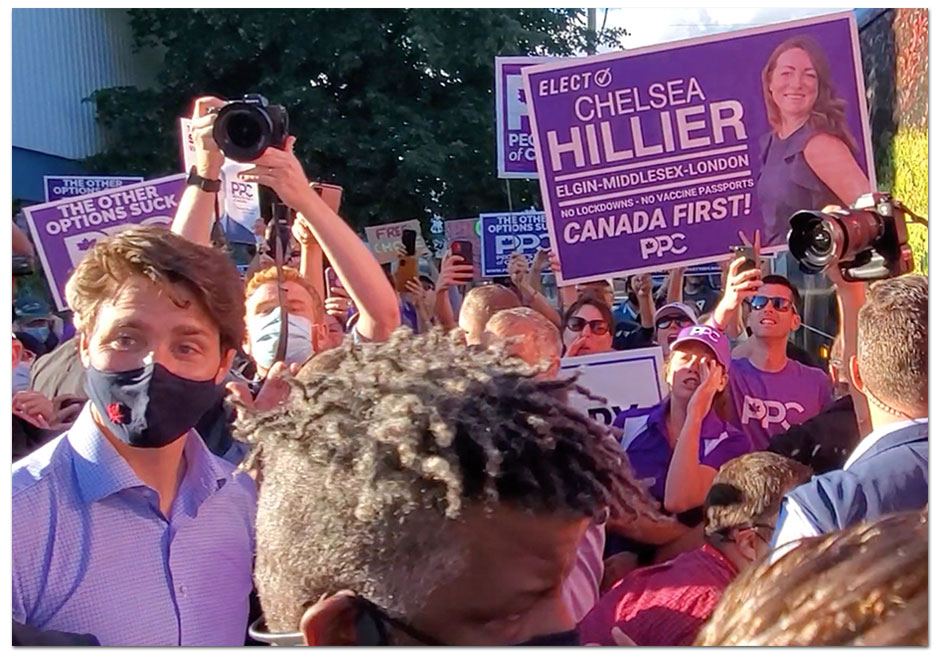 On the other hand, one of the biggest channels where protesters self-organize is run by a man who shares COVID-19 conspiracy memes and promoted by a 32-year-old suburban mom who believes vaccinations are being used as a pretext to bring about the “segregation of humanity.”

Complicating things further, the largest group at Trudeau’s August 28 campaign event, which was cancelled for security reasons, were pro-vaping activists upset about a proposed tax on vaping flavours — that group’s spokesperson is a former People’s Party candidate.

Some of the protesters that disrupted the prime minister’s event today had signs from the “Tobacco Harm Reduction Association,” which bills itself as the “Canadian voice for smoker’s/vaper’s rights.” pic.twitter.com/Cq4XKHx7et

“The organizing we are seeing is the work of dozens or even hundreds of separate online pages, channels, groups chats and social media posts,” Smith explained, adding that the protesters are “coalescing around pandemic and election issues and quickly being disseminated across platforms through common members.”

“There appears to not be a central body or group coordinating the actions.”

3. The protesters are self-organizing using a wide range of digital platforms and apps

The Toronto Star recently reported it uncovered a “loose network of COVID-19 vaccine and anti-lockdown protesters” using the chat app Telegram to share details about the whereabouts of Trudeau’s campaign events.

Individuals connect with one another online then organize car pools and set-up social activities for IRL meetups.

“Once Trudeau’s location is known, some group members organize carpools, while others meet up at the events and post live video from the crowd,” The Star observed. “Afterwards, they celebrate their efforts.”

The Star has been monitoring a group with more than 500 members, which uses the encrypted messaging app Telegram, since Saturday — the morning after dozens of angry protesters prompted Trudeau to cancel a campaign rally in the village of Bolton, Ont. https://t.co/aqHoESzusa

Drew, a researcher who has monitored the growth of Canada’s anti-lockdown movement over the span of the pandemic, says far-right and anti-vaccine protesters are relying on a variety of apps and digital platforms.

“They use any platform they can stay on,” Drew said.

While Facebook offers a “wide reach” and still plays an “important” role in helping these groups find and recruit new supporters, they are turning to new platforms because of “restrictions” Facebook has been imposing on their content.

As a result, these groups are increasingly using encrypted chat apps like Telegram or alternative video platforms like BitChute, Rumble and Odysee. 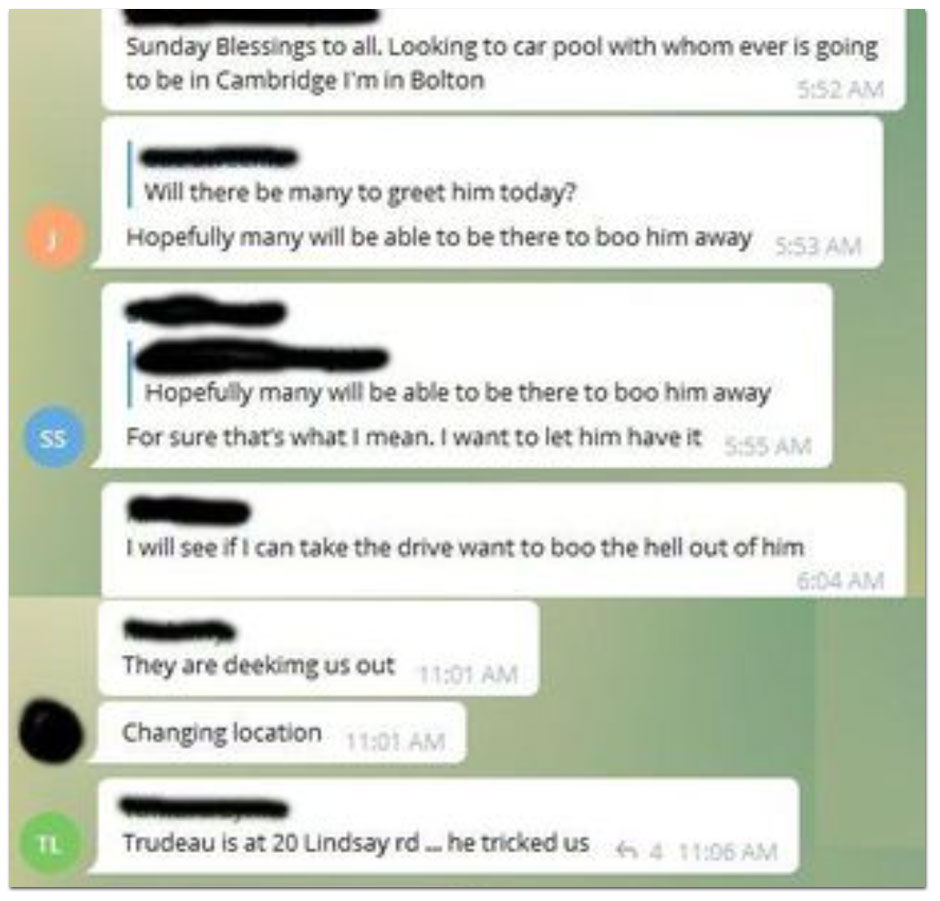 “Video sites are more for spreading ideas and streaming events than organizing,” Drew explained, whereas chat apps like Telegram are typically used by “small tightly-knit groups.”

Many of the communications channels now being used to promote protests at hospitals and Trudeau campaign events grew out of anti-lockdown and anti-mask protests. In some cases, the channels go back further to far-right Yellow Vest protests and campaign against M-103, a motion condemning Islamophobia.

One thing the Canadian Anti-Hate Network will be monitoring is how these groups and channels continue to evolve after election day.

“Even after the current iteration of the conspiracy movement has gone on to another issue, this network will remain.”