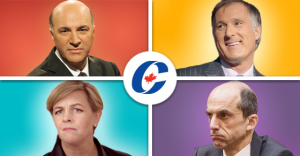 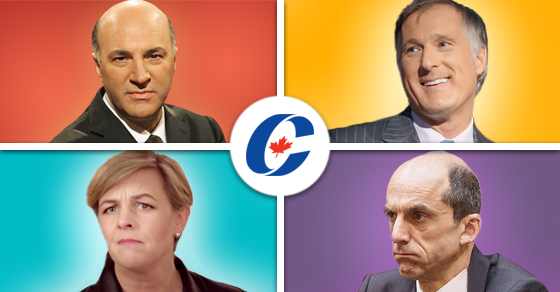 Yikes, Canadian conservatives may have just had the weirdest weekend ever

It sounds like these Conservatives had a pretty wild weekend.

How was your weekend?

Well, one thing’s for sure – that’s isn’t how Canadian Conservatives spent their weekend. Here’s a quick look at what they got up to instead:

1. Steven Blaney sent an e-mail asking if Allah should kill all the Jews?

You might remember Steven Blaney from his time as the Harper government’s Minister of Public Safety, back when he played a big role in pushing Bill C-51.

These days, Blaney’s running for Conservative leader and on Saturday, he sent e-mails to supporters with the following question in the subject line: “Should Allah kill all the Jews?”

After clicking on the e-mail you discover it is not, in fact, Blaney who wants a Muslim deity to “kill all the Jews” – “I don’t think so,” Blaney reassures his supporters, *phew* – but he suggests “some do.”

Blaney’s attempt to scapegoat an entire religion didn’t get the greatest reviews:

.@StevenBlaneyPCC This is a deplorable tactic. There is no chance you will win. Real conservatives don’t fall for this trash. #cdnpoli pic.twitter.com/FWyJUuI28x

That’s ironic. Leitch attempted to distance herself from Rebel Media two weeks ago after Rebel Media host Gavin McInnes was praised by neo-Nazis and a former Ku Klux Klan grand wizard and denounced by media outlets in Israel and around the world after questioning the Holocaust, blaming Jews for the rise of Hitler and publishing a rambling video titled “10 things I hate about Jews.”

Leitch’s campaign told iPolitics McInnes “would not be allowed into the country” under Leitch’s hardline immigration reforms.

Today, Leitch’s ads demanding immigrants be screened for “Canadian values” appear wrapped around the same article Leitch’s campaign had described as “un-Canadian” barely two weeks ago (Rebel Media later changed its headline to “10 things I hate about Israel”), as well as another article titled “a Nazi take on Israel.” Meanwhile in Alberta, Wildrose energy critic Drew Barnes is extending an olive branch in hopes of immersing NDP MLAs in his anti-scientific views on climate change.

Responding to a tweet promoting tickets to an event organized by Friends of Science, a group that rejects mainstream science and claims global warming is actually caused by sunshine, Wildrose MLA Drew Barnes announced he’s willing to buy two tickets:

“1 for me and 1 for any ndp Mla who wants to drive down with me from Edmonton.”

I will take 2! 1 for me and 1 for any ndp Mla who wants to drive down with me from Edmonton. #wrp #medhat https://t.co/rVIdF0UT6z

A Facebook page promoting the event in question describes how the event’s headline speaker believes the science of climate change is “madness”:

“Today’s society lives in the grip of a madness – the belief that humans are causing dangerous climate change … But contrary to what your political leader, professor, and newspaper tell you, global warming is dominated by natural factors.” 4. A Globe and Mail columnist’s encounter with Michael Chong’s baby

Leave it to the least gaffe-prone Conservative leadership candidate to keep getting tangled up in the weirdest news stories:

Last week, the Globe and Mail published a piece by columnist Leah McLaren describing the time she secretly tried to breastfeed Michael Chong’s baby at a house party “just for kicks.”

The Globe quietly yanked the story over the weekend before it subsequently blew up on Twitter. If you want, you can read it for yourself here.

Incident happened over 10 years ago. It was no doubt odd, but of no real consequence. Let’s focus on the important challenges facing Canada

You would have thought the story about how Chong’s campaign photos are being used to promote good hygiene in Guatemalan public bathrooms would be Chong’s weirdest story this month.

MP Michael Chong made a surprise appearance … on a bathroom sign in Guatemala. https://t.co/J07ts662Rb

5. Kevin O’Leary says he’ll override the constitution to crack down on American refugees

Never mind that O’Leary probably crosses the Canada-US border more times each week than some Canadians do in their lifetime, the Boston-based Conservative leadership candidate spent his weekend thinking about how to stop American refugees from crossing the border.

His solution? Invoke the notwithstanding clause and override the constitution.

Our PM has the ability to do this by using the notwithstanding clause, which his dad Pierre Elliot Trudeau put in the constitution in 1982.

This clause gives government the authority to respond to situations like this & put in place reasonable policies for Canada.

The notwithstanding clause is a section of the Charter that, under certain conditions, allows Parliament or provinces to override sections of the constitution.

So what’s the problem? Constitutional experts and political observers point out the notwithstanding clause doesn’t really have anything to do with what O’Leary’s talking about.

The notwithstanding clause has nothing to do with what you’re talking about. https://t.co/oEYRmVkXOz

I’m no lawyer but this literally is not what the clause is for nor is it needed in this instance. https://t.co/BPFC2vIDHs

Constitutional clauses aside, O’Leary also claims that what’s happening on the Canada-US border might soon resemble “what’s happening in Europe” where nearly one and a half million have fled war zones in Syria and Iraq.

However, the RCMP reports there has been no change in the number of “irregular crossers” intercepted at the Canada-US border compared to last year. Officials do note the number refugee claims filed at official points of entry has doubled, however.

6. Maxime Bernier would consider deploying the military on Canadian soil

O’Leary wasn’t the only one who spent his weekend thinking about the border.

On Monday, Conservative leadership candidate Maxime Bernier one-upped O’Leary by stating that not only would he consider using the notwithstanding clause to address illegal border crossings, he said that if it takes too long to put “additional manpower in place, he’ll send the military to defend the Canada-US border:

“I will look at additional temporary measures — including deploying Canadian Forces in troubled border areas.”

Once again, according to the RCMP, the number of people illegally crossing the Canada-US border has not changed since last year.