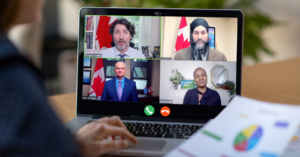 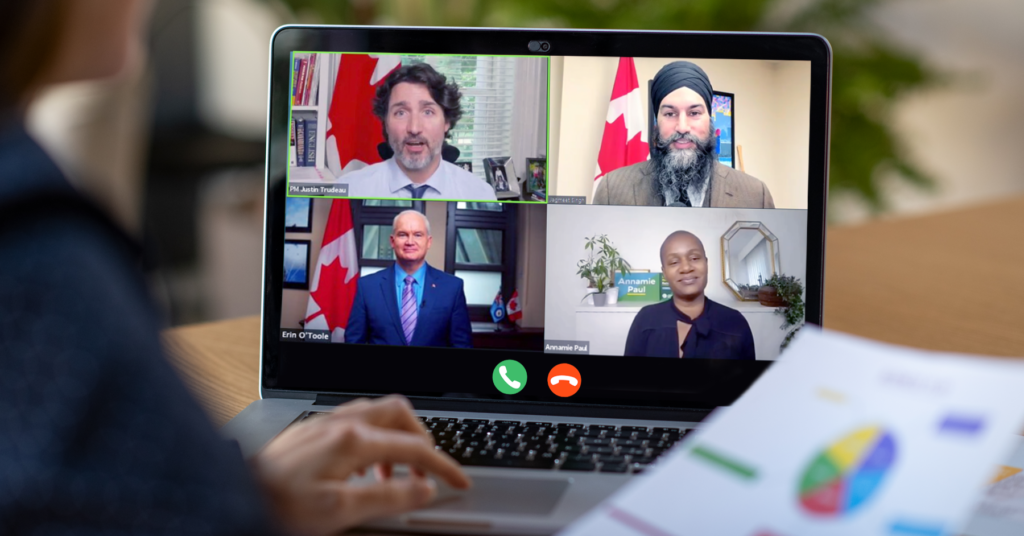 The ‘work-from-home revolution’ is set to bring dramatic, far-reaching and unequal changes for Canadian workers

The little sunshine and freedom that we’ve had to enjoy summer has been snatched away by an election that no one wants (except maybe Justin Trudeau’s Liberals) yet it is one of the most important elections of our time.

It is the election that will decide which party gets to determine the structure and programming of post-pandemic Canada. One of the most pressing issues that we’re not talking about in this election is the work-from-home (WFH) revolution.

The pandemic has fundamentally changed the way we engage in the workplace, taking it from in-person to virtual, with far-reaching consequences that will lead to major structural changes to the labour market.

Unfortunately, the change will be unequal, and the consequences borne by the most vulnerable — as usual.

About 40% of Canadian labour has been working from home during the pandemic but as Statistics Canada notes, “the likelihood of holding such a job is not the same for all Canadians.”

And therein lies the discrepancy. 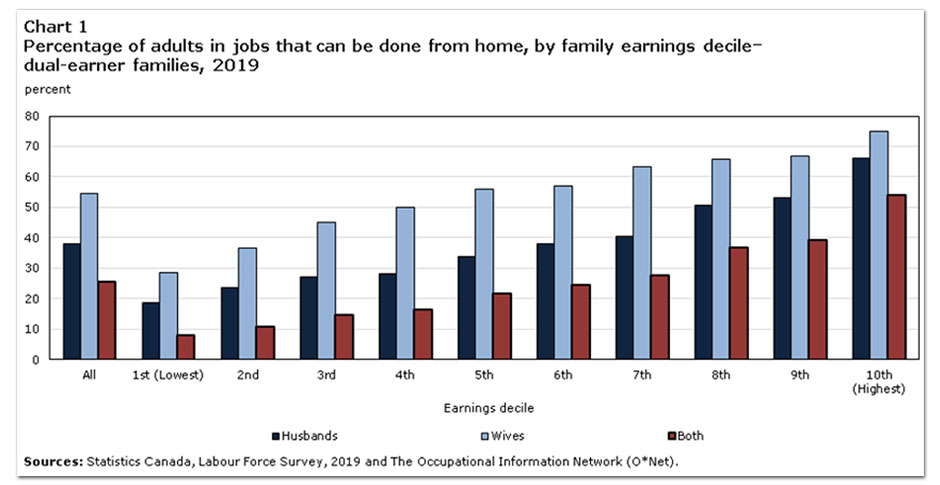 Firstly, remote work has been a boon for educated white men in their 30s and 40s who are the typical winners of any policy. As The Atlantic writes in their article about the winners and losers of WFH: “The most likely immediate winners of the remote-work revolution, then, are those who, in an economic sense, are already winning.” No surprise there.

Secondly, education, which can be used as a proxy to class, seems to be the driving force with who wins and who loses. StatsCan’s Labour Force Survey and The Occupational Information Network found that although “less than 30% of primary earners with a high school diploma can work from home, roughly 66% of their counterparts with a bachelor’s degree or higher education can do so.”

This statistic pretty much holds across different types of family units, with men more likely to work outside the home than women until higher education attainment renders the gender discrepancies meaningless. The only cohort of women working outside of the home in a greater proportion than their male counterparts is single mothers.

That means women and men are equal if they attain similar levels of education, right? Wrong. This neoliberal claptrap misses the point of inequities: the effects aren’t equal.

WFH has had the effect of reinforcing traditional gender roles, since unpaid, caretaking labour is typically done by women. 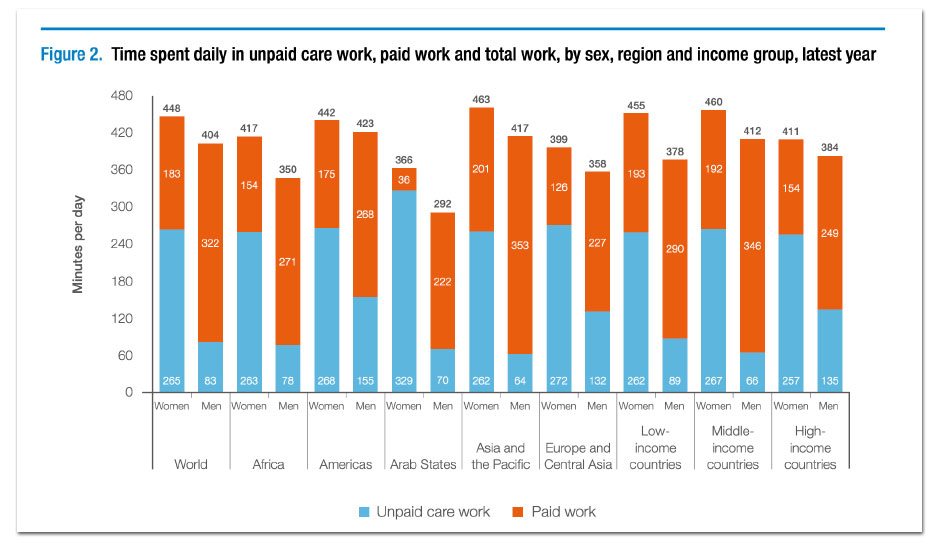 As the BBC reports: “Recent studies of British and American households showed that working women have continued to shoulder the lion’s share of childcare and household burdens during the pandemic, and more working mothers than fathers have reduced or adapted their working hours to accommodate childcare.”

Access to childcare has always presented a barrier to women’s labour force participation, which is why this Liberal government is so keen to make this an election issue. Given their feminist bonafides are in peril, addressing the she-cession, as it were, is a great opportunity for this government to repair its relationship with women after the Canadian Armed Forces sexual misconduct scandal.

With more women working from home, we may see the re-introduction of the male-dominated office. An article by the UK-based Chartered Management Institute,  notes “69% of women with children said they wanted to work at least one day from home when the pandemic ends, compared to 56% of men with children.”

Given that more men are opting to go back to work in the office, this can have far-reaching gender effects that could arrest women’s professional advancement, thereby stifling their lifetime incomes. Additionally, men will have more direct contact with the decision-makers in the office (who are typically men) and managers may prefer to promote those they can see working rather than those who they can’t. Research in Organizational Science argues “that face time helps employees to receive better work and leads to career advancement because it is a strong signal of their commitment to their job, their team, and their organization.” This is meta-level gender discrimination.

For Black women, going back to the office fills them with dread. The New York Times notes that “a whopping 97% of Black respondents in the U.S. said they preferred a fully remote or hybrid workplace. Only 3% of Black workers surveyed said they wanted to return fully in person, compared with 21% of white workers.”

A return to the office re-introduces them to racism, microaggressions, surveillance and a forced conformity to professionalism standards that are based on white supremacy (think of all the Black women and children who are sent home from work and school, respectively, for daring to wear the hair that naturally comes out of their head. The horror.)

It is not difficult to imagine that BIPOC employees experience higher rates of workplace stress, burnout and trauma compared to their white counterparts.

For Asian women who have had a particularly tough pandemic, from rising anti-Asian racism to the Atlanta Spa Shootings, there are anxieties around safety. Returning to the office means risking their physical safety every day, as the increase in physical confrontations against Asian people has exploded this pandemic.

For Vietnamese-born Dr. Pham, who is featured in the New York Times article, the microaggressions in the workplace belied any cultural competence: “Some years ago she faced criticism after she hung decorative paper lanterns above her desk. ‘I heard second-hand that those lanterns upset some co-workers because they felt they were unprofessional,’ she said.” Surely, those lanterns are professional enough for her home office.

In addition, BIPOC women are more likely to live in multigenerational households, sandwiched between parents and children and doing the caregiving for both generations. Interestingly, given that long-term care is getting the attention it deserves this election, coupled with an accessible childcare policy, the benefits may accrue disproportionately to BIPOC women.

With a pandemic that has opened a chasm of inequities in all aspects of our society and while we continue to bemoan them, none of the parties have addressed the inequities of returning to work. Given that the Delta variant shows no sign of slowing down, for winners (*cough* white men) they will continue to reap the rewards of the pandemic, while women, especially BIPOC women, will continue to suffer disproportionately.

And we wonder why there’s a gender pay gap.

Donate
Erica Ifill
Equity & Politics columnist
Erica Ifill is an economist and founder of Not In My Colour, a consultancy that builds equitable and inclusive workplaces. She co-hosts the Bad + Bitchy podcast and a regular columnist for The Hill Times.
@wickdchiq
Report an Error
Journalistic Standards