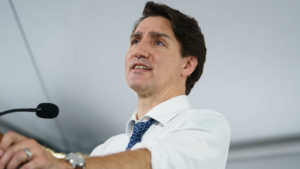 The images of homelessness and Toronto’s military-style intervention to clear Trinity Bellwoods Park of vulnerable encampment residents in the middle of a pandemic were enraging, especially for governments who say they’re committed to an affordable housing strategy as their top priority.

And those we see on the streets are only part of the equation, representing only about 20 percent of the total unhoused population.

Raising the Roof, an organization providing long-term solutions to homelessness, estimates about “50,000 people make up the ‘hidden’ homeless – individuals who temporarily stay with family or friends because they have nowhere else to go.” These are the precariously housed.

Affordable housing is a lightning rod of an issue this election, as many Canadians have awakened to the fact that their money doesn’t go as far as it used to. From housing to random Amazon products deeply discounted on Prime Day, the cost of living has gone up almost overnight. For the first time in years, inflation has returned as a political football for the first time in a generation, given that it has jumped to 3.7% in July of this year.

It’s within this context that Justin Trudeau remarked: “You’ll forgive me if I don’t think about monetary policy. You’ll understand that I think about families.”

You’ll forgive me if I don’t care for such a flippant remark — inflation is monetary policy.

The Canadian Mortgage and Housing Corporation (CMHC) is the main vehicle through which the government administers its affordable housing initiatives, so let’s go through what “affordable” means when it comes to housing.

If you spend less than 30% of gross income on housing, it’s affordable, which means many of us are drowning.

The pandemic has exacerbated the dearth of affordable housing, but it was an emergency thirty years in the making. And as usual, we, as a society, tinkered around the edges while defunding social services that could’ve intervened to help those on the brink of housing insecurity.

Now we have a crisis.

In January of 2020, Catherine McKenney, a councillor in the nation’s capital, introduced a motion, making Ottawa the first city to declare a housing emergency. It passed unanimously.

Councillor Catherine McKenney’s motion to declare a homelessness and affordable housing emergency in Ottawa is up for a vote today. #ottnews pic.twitter.com/XhvC7a7dgs

Like most Canadian cities, Ottawa has seen skyrocketing rental rates in the past few years. The Canadian Centre for Policy Alternative’s analysis on Canada’s rental market notes: “In the past two years, average rental prices in the city have risen by 13.5% while vacancy rates are stuck around a relatively low 1.8%.”

Budget 2017 introduced the National Housing Strategy, a now $70-billion program over 10 years, that promises to build 125,000 new housing units within that timeframe.

The program relies on several components, but the most relevant to increasing housing stock (housing supply) are the National Housing Co-Investment Fund and the Rental Construction Financing Initiative. The former “provides capital contributions and low-cost loans focusing on two key priority areas of the National Housing Strategy: the creation of new affordable housing and the repair and renewal of existing affordable and community housing.”

About $220 million has been distributed to Ottawa, but according to Councillor McKenney, the program has problems. The units must encourage mixed incomes with 30% of units be offered at 80% of median market rent.

But McKenney says the program doesn’t address affordability, it’s difficult to access and there’s a long process for approval. CBC reported that the application process “includes more than 200 questions, and after an application is received and placed in a queue it can take as long as 289 days before a funding agreement is finalized.”

As of September 2020, the co-investment fund only approved only two projects in BC. The data shows that up until this time, “Alberta, Newfoundland and Labrador, Nova Scotia, Quebec, Saskatchewan, the Northwest Territories and Yukon had no finalized funding for any of their applications”.

The other component is the Rental Construction Financing, a low-cost loan program intended to encourage rental construction by private developers.

Look at these generous terms: 50-year amortization rate at low interest rates, fixed for a long period of time and payments are due after 12 months of “stabilized effective gross income”, meaning if the developer doesn’t show stable income for years, they’ll never have to pay a cent towards the principle or the interest. The criteria only require 10 percent or more of the total number of units at 30 percent of the median household income. The median household income in Ottawa is $115,750, according to Statistics Canada.

Who do the Liberals think can afford almost $3,000 rent every month? This is what happens when you assume everyone is in the middle class.

The National Housing Strategy is an abject failure. Councillor McKenney notes that Ottawa municipality has received $370 million since the strategy, however 62% of national housing funds have gone to developers.

University of Toronto professor, David Hulchanski, called the strategy a “public relations gimmick,” in the Globe and Mail, and “the amount of money being spent now isn’t any more than what the previous Conservative government was spending, except for a small upward blip in 2016.” (There has been a top-up to the Rental Construction Financing in the Fall Economic Update 2020 of $12 million).

If Herongate is anything to go by, the Liberals can’t be trusted to deliver on affordable housing.

The story of the ‘largest urban eviction campaign’ in Canada https://t.co/1vWAMgK5gY pic.twitter.com/MWlaOD199o

In 2018, Ottawa developer Timbercreek Communities (and parent company, Timbercreek Asset Management) renovicted 100 families from Herongate, or “demolition-evictions of low-rent townhomes in order ‘to help the area become a premium, active adult-oriented rental community meant to offer resort-style living,’” as described by The Leveller.

Vice reveals that the neighbourhood has the highest density in the city and houses “1,360 residents categorize themselves as Black, and 670 as Arab. The Heron Gate Tenant Coalition’s own survey of residents who will be affected by the upcoming demolition found that 89 percent are people of colour — 44 percent Somali, and 24 percent Arab.”

This is how systemic racism in housing happens.

Herongate is the largest urban eviction campaign in Canada and it’s ongoing. While the Liberals claim that their commitment to affordable housing is unimpeachable, the riding that Herongate resides in, Ottawa South, has been held by David McGuinty — brother of former Ontario premier, Dalton McGuinty — since 2004.

Nothing. And this is why we can’t have nice things.

Donate
Erica Ifill
Equity & Politics columnist
Erica Ifill is an economist and founder of Not In My Colour, a consultancy that builds equitable and inclusive workplaces. She co-hosts the Bad + Bitchy podcast and a regular columnist for The Hill Times.
@wickdchiq
Report an Error
Journalistic Standards