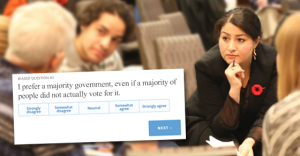 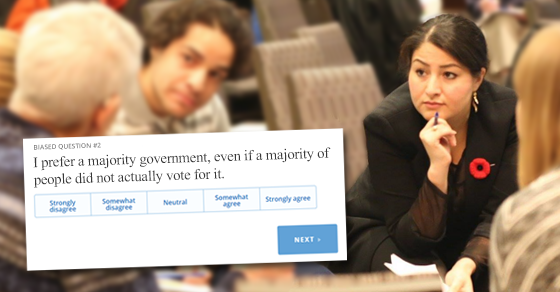 What if the Liberal government’s electoral reform quiz was biased towards reality?

Had a chance to fill out the Trudeau government’s new online electoral reform survey over at MyDemocracy.ca?

Prime Minister Justin Trudeau calls it a “fun little questionnaire,” but many Canadians say the questions are slanted to entice people to give Trudeau’s government the answers they want to hear:

On the other hand, one of those scientists told the Ottawa Citizen he had “no role in actually coming up with the questions.”

So we’ll leave it to you – do you agree or disagree a survey that suggests changing the status quo will lead to a takeover by “radical or extreme” parties sounds a little biased?

What would a quiz that’s biased towards reality look like? Here are a few ideas.

Maybe a quiz with a reality bias would point out that first-past-the-post produces “radical” parties too?

After all, this is the same system that helped the right-wing Reform Party and a separatist party become Official Opposition of the entire country thanks to a concentration of regional support:

And Donald Trump didn’t do too badly under a first-past-the-post system either.

Hmm. Also, what kind of question could we come up with about a system where a minority consistently elects majority governments?

In the last election, 9 million voters voted for somebody else. Hard to strongly agree with a system like that, right?

By the way, what our biased quiz ask Canadians about parties forming government even though another party received more votes?

Oh! And hey! Do you like to keep things simple? What could be simpler than having no real choices?

And what about the meaning of democracy?

Because in 2011 and 2015, both Stephen Harper’s Conservatives and Justin Trudeau’s Liberals won majority governments with exactly 39% of the popular vote.

With the stakes so high, that usually means voters find themselves in the position of voting against the party they want to stop from winning power than voting for the party they believe in.

But hmm. How can we phrase that as a biased question too?