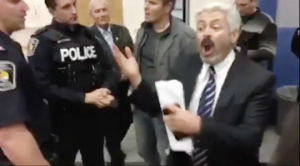 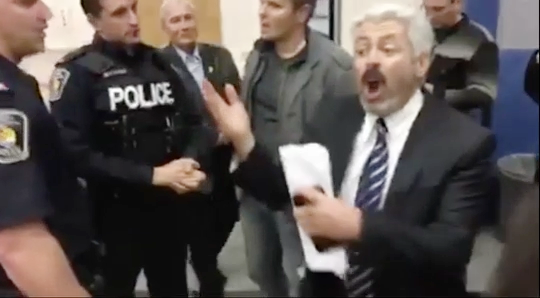 Former Conservative candidate Konstantin Toubis says Patrick Brown people blocked him from running for the Ontario PCs. And boy, he's not happy about it.

Some say every ending is a new beginning.

Although his dream of running for provincial politics is ending, for former federal Conservative candidate Konstantin Toubis, a North Korean-style autocracy under Ontario PC leader Patrick Brown is just getting under way.

“Welcome to the new world of dictatorship,” as Toubis puts it.

Toubis has had a pretty wild week.

On Saturday, Toubis issued a statement over Facebook claiming party bosses had blocked him (“without explanation”) from seeking the Ontario PC nomination for the Toronto-area riding of King-Vaughan.

Things escalated at the nomination meeting Sunday that saw Toubis stand on a chair denouncing Patrick Brown as a “dictator” to an angry mob of Ontario PC members crowded in a local Catholic elementary school gym – at one point, police were forced to step in and try to lower the temperature in the room.

Despite assurances that they hadn’t been sent to “intervere in the political process,” Toubis proceeded to denounce the police too:

In another statement on Facebook Monday, Toubis continued to blast Brown and the PC Party’s executives, suggesting they were behaving like communist North Korea and other “countries with dictators in power,” alleging the party had used threats and heavy-handed tactics seen only in the “third world” to hand the nomination to Stephen Lecce, who was formerly Stephen Harper’s director of media relations. Another potential factor could be Toubis’ troubled history “re-posting” homophobic and misogynistic articles on Facebook.

During the 2015 federal election, Toubis made headlines around the country following a report by PressProgress on Russian-language listicles he’d been sharing on Facebook about drunk women, latent homosexuals and “being a man” – this even after securing the Conservative nomination for King-Vaughan. More recently, PressProgress reported that Toubis counts himself as one of Kellie Leitch’s top donors.

If Brown’s PC leaders based their decision to block Toubis’ nomination on the grounds that his taste for misogynistic listicles could be a liability during an election, Toubis might ask why Brown is blocking him and not Carleton-Mississippi Mills MPP Jack MacLaren too?

MacLaren recently found himself at the centre of controversy when he argued against a zero tolerance policy towards doctors who sexually assault patients, explaining that he finds the idea “intolerant.” MacLarent is currently leading Brown’s outreach efforts in rural Eastern Ontario.

Below is the full text of Toubis’ recent statements issued over Facebook: