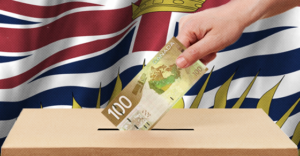 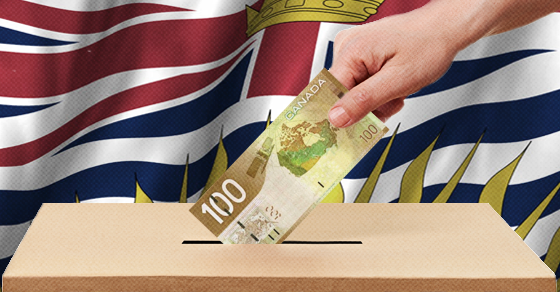 Why are BC’s wealthy elites so worried about the province’s upcoming electoral reform referendum?

New filings released by British Columbia’s elections authority show the ‘No’ side in the province’s upcoming electoral reform referendum is largely funded by BC’s wealthiest elites and right-wing power brokers.

This fall, British Columbians will cast their votes on whether the province should stick with its outdated first-past-the-post electoral system or join other countries around the world, such as Germany, New Zealand and Norway, who have relied on a proportional voting system without any problems for decades.

According to newly published financial disclosures by Elections BC, it turns out the people who most want to stick with the status quo are BC’s rich and powerful “entrenched interests.”

For the referendum campaign, Elections BC announced the government has allocated $500,000 to both the pro-reform and anti-reform campaigns, and will allow an additional $200,000 in advertising funds for each side to come from third parties.

Here’s a breakdown of some of the big spenders who each donated more than $1,000 to the ‘No’ campaign – as well as some of their ludicrous views and shady dealings:

Suzanne Anton, the former Attorney General under Christy Clark’s BC Liberal government, is the founder and director of the No Proportional Representation Society of BC, the official group representing the ‘No’ side.

Anton recently tweeted an absurd theory suggesting “proportional representation” is part of a conspiracy aimed at the “disruption of Canadian economic activity.”

So here’s the question: why are some of the same beneficiaries of US $$ so actively in support of proportional representation? An extension of their disruption of Cdn economic activity?? Dogwood, Leadnow & Greenpeace all love PR. #NoBCProRep #bcpoli @ellisbross

Ross Beaty, a wealthy mining tycoon whose company was accused of scavenging off Iceland’s economic collapse after the firm bought up assets from a failing local hydro company, is also helping bankroll the ‘No’ campaign.

Beaty donated nearly $90,000 to the BC Liberals between 2010 and 2017, including a $5,000 donation to BC Liberal leader Andrew Wilkinson’s leadership campaign.

Ironically, Beaty’s preferred BC Liberal leadership candidate would have lost the contest under the first-past-the-post system that he is now paying to support.

Rob Hartvikson is a wealthy venture capitalist who got rich from heavily discounted stocks in the gold and diamond industries during the 1990s.

Hartvikson subsequently became tangled up in a conflict of interest scandal. In 2000, a commission found that Hartvikson and Blayne Johnson, a fellow Vancouver stockbroker, withheld information from their clients and made off with more than $5 million.

Hartvikson subsequently fled to Ireland in 2001 to avoid public attention.

Hassan Khosrowshahi, a Vancouver-based billionaire and founder of Future Shop, is a major BC Liberal donor and serves as a director for the right-wing Fraser Institute.

In 2015, Clark’s BC Liberal government sold Khosrowshahi 14 parcels of land in Coquitlam for a staggering $43 million below its appraised value. At the time, the NDP accused the BC Liberals of discounting the land as a personal favour to Khosrowshahi, whose company had donated nearly $1 million to the Liberals.

Jess Ketchum is president of Ketchum Communications, a lobbying firm whose clients have included the Council of Forest Industries and the British Columbia Lumber Trade Council

Prior to becoming a lobbyist, Ketchum was a well-known political operative and campaign manager for the right-wing BC Social Credit Party. He later worked as a BC Liberal advisor.

Other donors listed in the initial disclosure include:

These donors aren’t the only ones bankrolling efforts to stop electoral reform.

Earlier this year, lumber magnate and long time BC Liberal donor Jim Shepherd was outed as the person behind a well-funded astroturf group that was bombarding British Columbians with attack ads and robocalls in advance of the official referendum campaign.