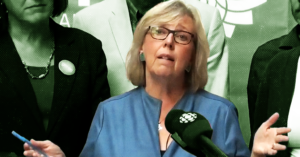 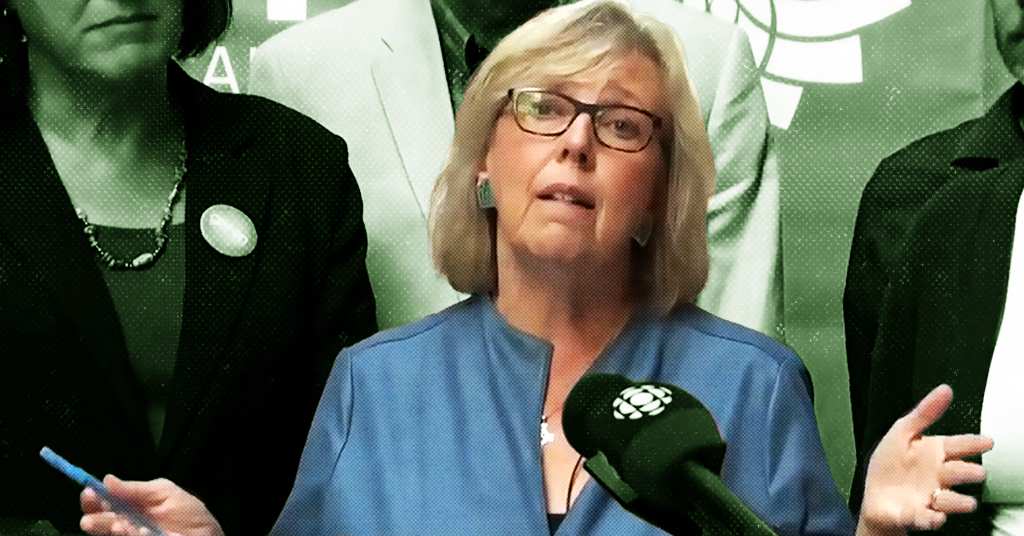 We Asked Dozens of Green Party Candidates What They Think About Abortion. Many Are Out of Step With Elizabeth May.

Elizabeth May says there is “no ambiguity” in the Green Party’s position on abortion, yet many of her own candidates openly contradict her public statements.

Last month, the Green leader pushed the issue of abortion into the public spotlight after telling CBC News she would not stop a Green MP from reopening the abortion debate, pointing to the Green Party’s free-spirited internal culture.

May quickly flip-flopped, telling The Globe and Mail she would ban any candidate or oust any MP who refused to toe the party line on abortion. After CBC News found two Green candidates had advocated anti-abortion positions, May announced she was “re-vetting” her candidates.

The Green leader has a history offering confusing messages on abortion. May once described her position as “pro-life, pro-choice” and stated that although she supports abortion rights, she gets “queasy” hearing people say women have a right to choose because “I’m against abortion. I don’t think a woman has a frivolous right to choose.”

In recent weeks, PressProgress made attempts to contact over 200 Green candidates and question them about their positions on abortion. In total, 35 Green candidates supplied responses to a list of questions.

Even though May walked it back, over two-thirds (70%) of candidates indicated they agreed with their leader’s initial statement to CBC News that Green MPs should be allowed to have free votes on any piece of legislation, no matter the topic. Another 23% said they agreed with their leader, but offered caveats or said their position was more “nuanced” than what May told CBC News.

When asked if Green MPs should also be allowed to have free votes on legislation that would reopen the abortion debate, more than half (62%) agreed it should be up to individual Green MPs to cast votes according to their personal opinions.

More than a few candidates said the party’s libertarian approach to policy-making is what attracted them to May’s party and is core to their identity as Greens.

“I joined the Greens because it is a party that is not governed by the whim of the leader,” said Terry Teather (Niagara West), who said he believes MPs should vote however they like on all issues, including abortion.

Teather won’t say if he’ll vote against legislation that restricts a woman’s access to abortion services until he’s had a chance to read it over and think about it first, explaining he can’t “dislike a particular book without ever having read it.”

Hugo Reinoso (Mississauga Centre) insisted the Green Party is “not a cult,” and said Green MPs “have the right to their beliefs and are free to make their own choices” — including votes on legislation relating to abortion.

“One cannot be pro-choice and force others to follow your decision,” Reinoso said.

On the flip side, some candidates, like Jean-Michel Lavarenne (Ahuntsic-Cartierville) say they are firmly pro-choice and believe any Green MP who votes to limit access to abortion services “should be expelled from the Green Party.”

Brooke Martin (Haldimand-Norfolk) added “decisions on legislation should never be made based on an MP’s personal beliefs,” stressing MPs are not elected “to represent their own personal beliefs.”

“All decisions should be made based on evidence and science,” Martin said.

Yet a clear majority of Green candidates disagree with Lavarenne and Martin, with nearly two-thirds taking the position that Green MPs should be free to vote on legislation relating to abortion according to their personal opinions.

Green Party officials declined to answer questions from PressProgress asking if the party is sending confusing or mixed-messages on abortion and whether May is at all concerned her candidates are out of step with her official talking points.

The Greens previously issued a statement claiming to “vet all potential candidates” on issues like abortion, but most Green candidates who spoke to PressProgress say no one directly asked them about it.

One candidate supplied PressProgress with a link to an online questionnaire run through Google Forms that the Green Party uses to vet candidates.

The candidate said the extent to which the Greens vet their candidates on questions relating to abortion is a simple “yes / no” question box, asking: “Are there any GPC policies you do not support.”

To be sure, some Green candidates say the issue is of sincere importance to them.

Jennifer Purdy (Kanata-Carleton), a family physician, told a story about grilling Liberal MP David McGuinty about the Liberals expressing support for abortion rights but taking no action to secure access to abortion services in Canada.

Purdy suggested the personal opinions of Green candidates on abortion are irrelevant since it is a “human rights issue.”

Sarah Kraynick (Desnethé-Missinippi-Churchill River) said she would “fight any legislation that would take away access to abortion services,” noting one of her family members “died in a ditch because of a back alley abortion.”

Jeff Wheeldon (Northumberland-Peterborough South) admitted he attended an “anti-abortion rally” and was involved in the “pro-life movement” when he was younger, saying he “grew up in a conservative Christian subculture,” but explained how his thinking on the issue evolved into a “strongly pro-choice position.”

Others, however, struggled to articulate their own positions.

Robert Mellalieu (Central Okanagan-Similkameen-Nicola) refused to identify as “pro-choice” or “pro-life” because “it is inappropriate to dilute the very complicated question of abortion to a simple binary answer,” before finally summing up his thoughts: “I believe there should not be a need for abortion.”

Greg “the Green Man” De Luca (Brossard-Saint-Lambert) also refused to answer the question, declaring: “I identify as neither.”

“This question is misleading and presents a false dichotomy,” De Luca said, adding that he believes women seeking abortions should be required to obtain permission from “medical professionals and family members to sign off on the act.”

Marc Reinarz (North Okanagan-Shuswap) said he is “pro-choice” but added that “abortion must not be a means to birth control.”

Meanwhile, Gordon Kubanek (Carleton), warned PressProgress that “looking for perfection is a dangerous and unfortunate thing” and that people are “complex and contradictory beings.”

“I want to warn you, I will NOT be cornered into a simple, polarized position,” Kubanek said, before adding that “we must, in a democracy, follow Churchill’s dictum that democracy is a terrible system but all the others are worse.”

Kubanek’s response did not directly address any questions relating to abortion.

De Luca stated his initial response “did not make my position on this issue clear” and apologized for “the confusion and for any harm I have caused.”