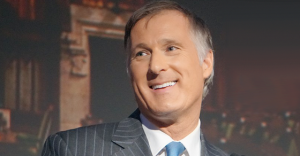 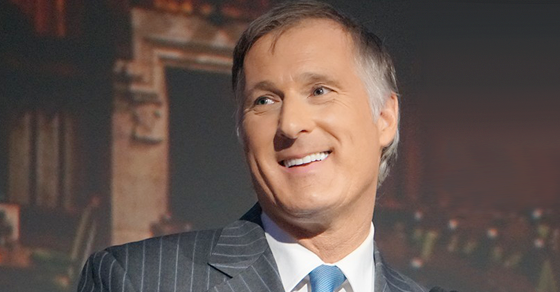 The Conservative leadership candidate did an interview with a website that's been denounced as "racist and homophobic" by the Mayor of Mississauga.

What was he thinking when he agreed to do the interview?

The Gazette is an obscure website called “hateful towards the Muslim community” by the National Council of Canadian Muslims and denounced as “racist and homophobic” by Mississauga’s mayor – in fact, the mayor even filed a hate crime complaint against the website with police last fall. Here are a few highlights from Bernier’s interview:

Although he fields several questions that veer into outlandish territory, Bernier doesn’t quite challenge the premise of the questions and often sounds like he’s twisting himself in a pretzel trying to strike a conciliatory tone.

For example, one question tackles the question of “Somalian Muslims” who have transformed Ottawa into “the murder capital of Canada” – a claim that’s at odds with the fact Ottawa’s homicide rate ranks 28th in Canada:

“About 15 minutes ago a very disturbing article was sent to me in that Ottawa is now being called the murder capital of Canada. And that’s because there’s a lot of Somalian Muslims either killing each other or killing folks that live in the same low-income housing as them. Is there any commentary that you have on that?”

Bernier’s response? Although he stresses “we cannot blame a religion or something like that,” he also says the baseless claim of a murder spree shows “you want to have immigrants that will be able to integrate into our society.”

“We don’t want people to live in a ghetto,” Bernier adds.

And then there’s the age old question on how to encourage “old stock Canadians” to have more babies:

“What about Canada’s birth rate, which is incredibly low? Is there not going to be any incentive that would be given to Canadians, especially – as Harper had worded it – old stock Canadians, to having more children that are born here who are already adapted to the culture because that’s what they’re going to be raised in … Will there be any plan to get a larger sum brought in to Canadians who are second, third, and fourth generations to having more kids?”

Acknowledging that “yes, that’s a challenge to the Canadian society” and suggesting “more immigrants” could help, in the next breath, Bernier suggests “lowering taxes” for families would add “another incentive for maybe having another child, I think that’s a solution.”

And then the conversation turns to “social engineering”:

“Ok, and let’s move over to social engineering for a second here. I’m sure you’re familiar with the foolishness around having 38 genders now … What are the thoughts here on the PC party’s view of gender? Are we going to keep it simple? Male, female? He, she?”

Here’s how Bernier sums up his views on gender: “yeah, we must keep that simple.”

Elaborating further, Bernier says he agrees with controversial University of Toronto professor Jordan Peterson that there is “too much political correctness,” but he’s also “open” to people who want to “change sex” – but “at the end, there are two genders in Canada.”

After that, Bernier takes a question on Human Rights Commissions that includes this blurb:

“They seem to be little more than censorship bodies that tell white people what they can and cannot say.”

Bernier? “We have a Charter of Rights in Canada and we know free speech is there.”

It’s worth noting, a few weeks after the interview, Bernier met with Peterson and vowed to “repeal” Canada’s human rights legislation protecting Canadians from discrimination by gender.

So, what’s going on here? Is Bernier courting fringe elements on the far-right or is he too oblivious to recognize what he’s walking into?

This week, Bernier found himself dumbstruck by an online backlash to a bizarre graphic tweeted out by his campaign placing Bernier and Derek Fildebrandt, Alberta’s Wildrose party finance critic, into the film The Matrix, for some reason:

According to the movie, the red pill is supposed to awaken people from the illusion that they’re living in a computer. But the “red pill” has another connotation – as many were quick to point out, it’s the name of an anti-woman web forum used by members of the so-called alt-right:

Are you aware that these online tropes are used by misogynist communities that terrorise women, @MaximeBernier? https://t.co/nvUB7CpUqH

What was Bernier’s reaction? He scratched his head and said it was just an innocent reference to a movie he thought he’d bring up unprompted 18 years after it was released in theatres:

My Matrix meme with @Dfildebrandt obviously refers only to the Matrix movie and to nothing else.

Bernier didn’t know what Red Pill means online? Hogwash. He knows. He’s been pandering to this faction for a month. #ableg #cdnpoli https://t.co/NtLpmYFtuY

But as coincidence has it, Bernier happened to tweet his “red pill” meme at the same time as a Wildrose campus club was promoting a screening of a men’s rights film (also called The Red Pill) by firing off an e-mail declaring “feminism is cancer”:

FWIW, Bernier was tweeting at a Wildrose MLA when he made the red pill reference https://t.co/e0Juxz0wX4

From the political party that brought you “lake of fire.” The Wildrose Party presents: “feminism is a cancer.” pic.twitter.com/ZlZTCdcjEF

Screenshot of the WROC website from the Wildrose Party’s official website – Brian Jean said they weren’t an affiliated group though? #AbLeg pic.twitter.com/jINUJKOjFT