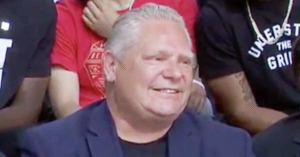 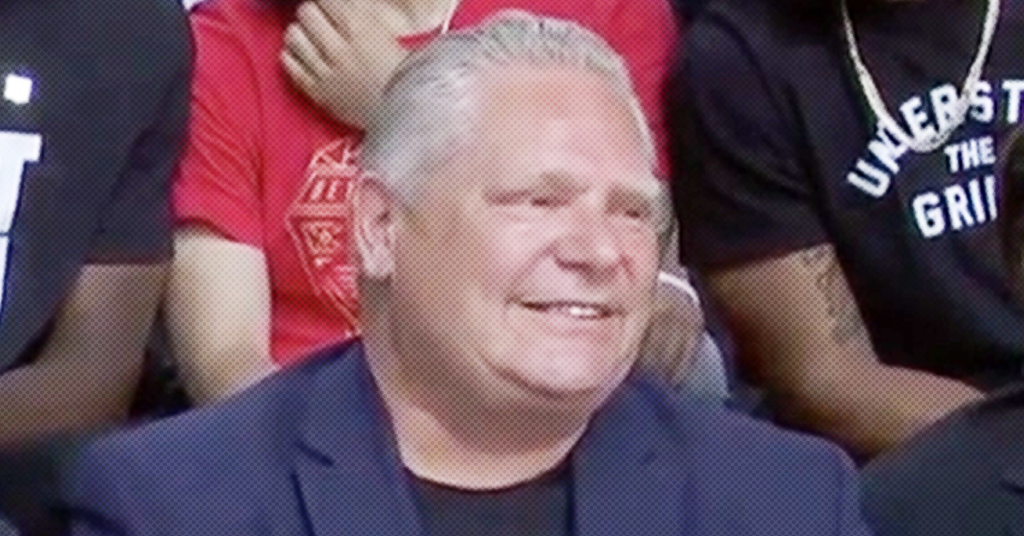 The Premier of Ontario keeps getting booed at major public events

Ontario Premier Doug Ford has managed to pull off a rare three-peat.

After he was recently booed at the Special Olympics and then booed a second time at a big tech conference, Ford rounded things off by getting booed an unprecedented third time Monday at the Toronto Raptors’ NBA championship parade.

Ford, who recently shutdown the Ontario Legislature and gave himself a five-month paid summer break, has seen his approval ratings nosedive following a series of reckless and widespread cuts targeting working families as well as Ontario’s most vulnerable citizens.

Notably, that includes deep cuts to education, something educators say may impact school sports programs and other after-school activities.

Video from the event shows Ford was loudly booed by thousands and thousands of people gathered outside Toronto City Hall when his name was announced as one of the VIPs observing the victory ceremony:

Ontario Premier Doug Ford was greeted with a chorus of boos when he was announced to the crowd at the #raptorsparade. #onpoli #wethenorth

The boos appeared to sound even louder from inside the crowd:

Premier @fordnation gets booed after he was introduced on stage #onpoli #wethenorth pic.twitter.com/hbXb8rbxZC

Ford’s reception was so icy, it appeared to be too much to bear for Toronto Raptors star point guard Kyle Lowry:

That wasn’t Ford’s only airball of the day.

Raptors GM Masai Ujiri — who may not even know who Ford is — appeared to brush off the Premier’s advances as he leaned in for a bro-hug.

The GM just blew by Premier Ford in 2 seconds flat. I’m not sure he even knew who Ford was. pic.twitter.com/5kkQ4UK9eT

While Ford wore a Toronto Raptors t-shirt Monday, he hasn’t always been one of the team’s biggest supporters.

Doug voted against the Raptors practice facility he’s now standing in front of. It costed the city zero dollars. https://t.co/3uCd1iR5Bn

As a Toronto city councillor, Ford and Mayor Rob Ford were the only two people to vote against approving the construction of the Raptors’ practice facility.

At the time, Ford and his late brother were stubbornly voting against things the rest of city council were in full agreement about.

Council votes 38-2 to approve a no-cost-to-city Raptors practice facility at the Ex; Rob Ford and Doug Ford against: http://t.co/ol65eDLVot

The facility was to be of no-cost to the city and, as per the agreement, the city’s parks department would be able to give community groups access to the facility.