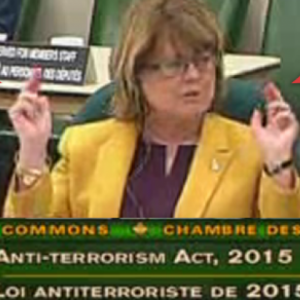 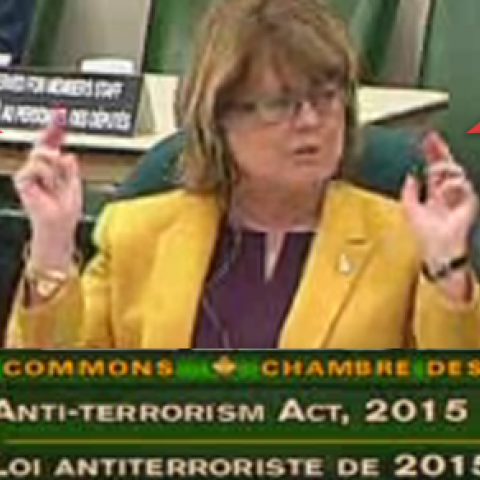 “Rule of law?” Whatever! During the final day of parliamentary hearings into the government’s controversial anti-terrorism bill, Conservative MP Diane Ablonczy used air quotes to dismiss an amendment, first proposed by the Canadian Bar Association, that would have put into writing that Canadian judges can’t authorize violations of the Charter of Rights and Freedoms: “Now […]

“Rule of law?” Whatever!

During the final day of parliamentary hearings into the government’s controversial anti-terrorism bill, Conservative MP Diane Ablonczy used air quotes to dismiss an amendment, first proposed by the Canadian Bar Association, that would have put into writing that Canadian judges can’t authorize violations of the Charter of Rights and Freedoms:

“Now the judge has to also consider … something like ‘rule of law’, they have to consider things like ‘principles of fundamental justice,’ whatever that is … There would be such a morass of opinions and considerations that action would be pretty much at a stalemate.”

Got that? Forcing judges to follow this so-called “rule of law” thing will just confuse judges and waste everyone’s time, so “whatever.”

During the clause-by-clause review of C-51, Ablonczy (who had previously accused a civil liberties group representing Canadian Muslims of supporting terrorism — that group is currently in the process of suing the Prime Minister’s Office for defamation) also accused the Green Party (which tabled the amendment at committee) of putting Canada’s national security interests at risk by putting “barriers in the way of protecting Canadian society against terrorism and terror threats.”

The amendment was based on a recommendation brought forward by the Canadian Bar Association, a national association representing 36,000 lawyers across Canada.

Specifically, the CBA believes “judges should not authorize Charter violations,” as C-51 appears “to provide for judicial warrants to authorize the violation of any Charter rights. This brings the entire Charter into risk, and is unprecedented.”

“It is untenable that the infringement of Charter rights is open to debate, in secret proceedings where only the government is represented.”

And here’s what they proposed to make C-51 better:

Journalists monitoring the proceedings were quick to react to Ablonczy’s remarks:

“They have to consider something.. rule of law, or ‘principles of fundamental justice, whatever that is,’: Diane Ablonczy on judges.

@kady It was actually the toss of the hands that made it worth watching. There should be a highlights reel of #C51 hearings.

Meanwhile, some legal experts were perplexed by Ablonczy’s skepticism of terms used in the Charter of Rights and Freedoms:

.@kady Can’t help but notice that “fundamental justice” and “rule of law” are terms actually used in the Charter.

I have never seen someone who graduated from law school say “principles of fundamental justice, whatever” as if this was some novel concept.