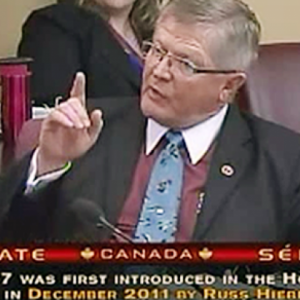 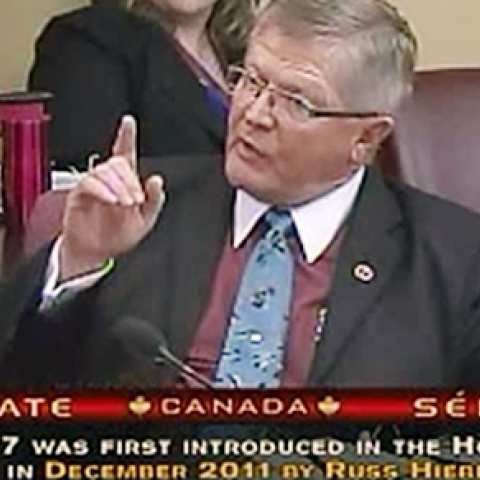 How’s that war on workers going, Conservatives? During Senate hearings into the anti-union Bill C-377, one particularly defensive Conservative senator stood up for the integrity of the Upper Chamber by arguing that criminal charges against Senator Mike Duffy somehow prove the institution isn’t plagued by a culture of corruption. Senator Donald Plett then threw a temper tantrum, insulted a distinguished witness […]

During Senate hearings into the anti-union Bill C-377, one particularly defensive Conservative senator stood up for the integrity of the Upper Chamber by arguing that criminal charges against Senator Mike Duffy somehow prove the institution isn’t plagued by a culture of corruption. Senator Donald Plett then threw a temper tantrum, insulted a distinguished witness and reportedly stormed out of a room otherwise dedicated to sober second thought.

The controversial Bill C-377, a private member’s bill backed enthusiastically by Prime Minister and his Cabinet, targets unions to disclose internal financial information (that employers can use against workers to manipulate labour negotiations) to the Canada Revenue Agency). Experts have pointed out it’s an unconstitutional attempt to interfere with and weaken Canadian unions.

Responding to one Conservative senator’s innuendo that labour unions are corrupt, lawyer Paul Cavalluzzo (appearing as a witness) suggested Conservative senators are probably the last people who should be lecturing anyone about corruption and transparency.

That suggestion from Cavalluzzo (who served as the senior commission counsel at the Maher Arar inquiry and more recently appointed by the Federal Minister of Justice to act as a Special Advocate in security certificate cases) didn’t sit well with Conservative Senator Donald Plett.

Watch Senator Plett tell Cavalluzzo he had “wasted” his time:

However, some Conservative senators have a better nose for hypocrisy than others.

In 2013, now retired Conservative Senator Hugh Segal opposed Bill C-377 on its last trip through the Senate, arguing it would (among other things) give employers and corporations an unfair advantage — something that could drive down wages and distort the labour market:

“The bill before us also violates solicitor-client privilege and forces upon unions in Canada disclosure levels far lower than the corporations, whether public or private or government employers with whom they might negotiate. This will actually worsen labour relations in Canada, slow economic development, and upend the balance between free collective bargaining, capital investment and return, which are vital to a strong and free mixed-market economy. As a Conservative, I oppose the upending of this balance.”

So why does Bill C-377 only target workers and not corporations?

Well, the author of the bill, Conservative backbencher Russ Hiebert, told the Senate hearings the reason he’s not targeting corporations is because the government just happens to be “focused” on going after unions this time around:

“In terms of corporations, I have frequently been asked: Why does this bill not apply to other institutions?  The simple answer is:  I’m focused on this category of institution, just like in the past, and legislation was brought forward to focus on charities, in 1977.  Since then, they’ve had to disclose.  More recently, the First Nations Transparency Act focused on that type of institution.  Now they have to disclose.”

“We do it for charities. We recently extended it to First Nations. For many years we extended it to federal and provincial government Crown corporations. We have learned that transparency and accountability are good for the institutions that serve the public.”