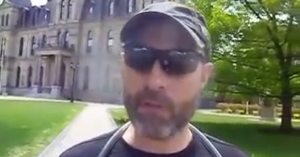 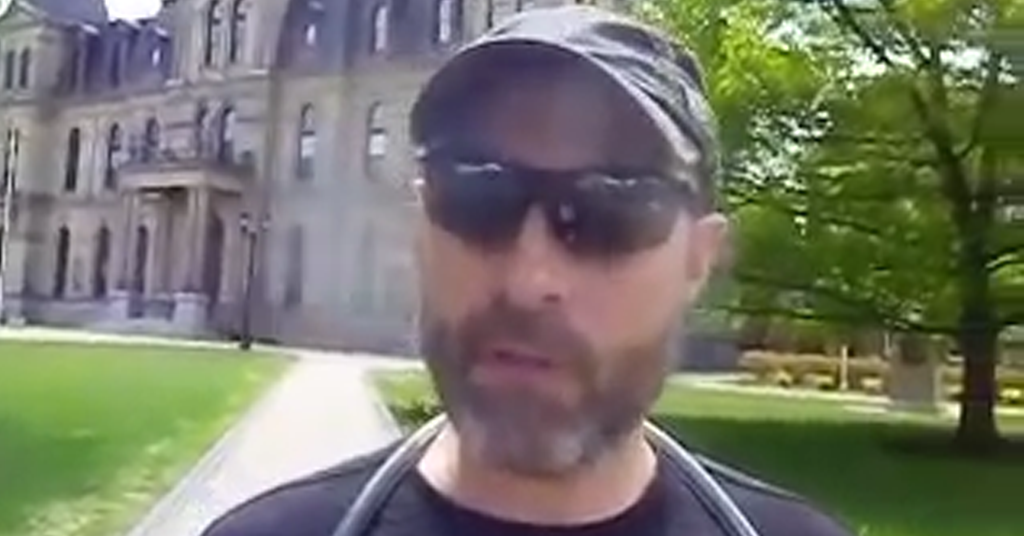 The man accused of a mass shooting in Fredericton, New Brunswick last month once named Ezra Levant’s Rebel Media as his most trusted source for news.

Matthew Raymond stands charged with four counts of first-degree murder in connection to a mass shooting in Fredericton last month that claimed the lives of two local police officers.

In a newly surfaced YouTube video, the accused mass shooter can be seen praising the far-right website’s anti-Muslim coverage and suggesting Rebel Media is one of the only news sources around that isn’t “biased.”

The video, filmed by local blogger Charles LeBlanc in June 2017, shows Raymond standing by himself on the front lawn of the New Brunswick Legislature holding a sign suggesting he was participating in a “million canuck march” against “Sharia Law” and “M-103.”

“I noticed this guy just standing there near the corner of Queen and St. John street and just stood there,” LeBlanc told PressProgress.

“He wasn’t loud, he was just standing there with this sign,” LeBlanc said, adding  “there was so much information in there that I really couldn’t understand what his sign was all about.”

In the video, LeBlanc repeatedly challenges Raymond’s “bullshit” views on Muslims and, at one point, asks him: “where do you get your news?”

“The news that everyone’s getting is not always the exact truth, they are more biased,” Raymond says. “They will say whatever they want.”

Raymond endorses a series reports by disgraced former Rebel Media personality Faith Goldy who was fired after appearing on a neo-Nazi podcast – Goldy is currently running as a fringe candidate for Toronto mayor.

In 2016, Goldy did a series of reports claiming Syrian refugees had sexually assaulted students at Fredericton High School. A closer analysis of Goldy’s source material by a local NGO working with refugees found several reasons to doubt the accuracy of her reporting and school board officials later dismissed Rebel Media’s reporting as “sensationalization and exaggeration.”

In the video, LeBlanc suggests to Raymond that Rebel Media made-up the story, asking “how come we’ve never seen nothing in the courts?”