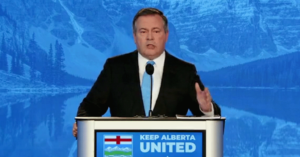 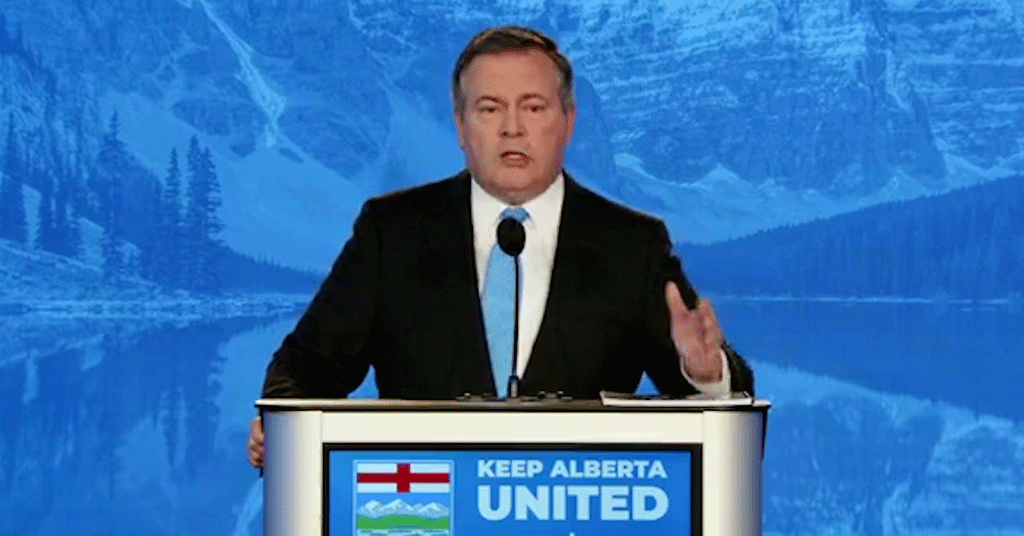 This article is more than 3 months old
Analysis

Kicking off his fight to hold onto the leadership of the United Conservative Party, Kenney delivered a speech over the weekend by claiming he is defending the province’s school children’ from the Alberta NDP’s secret agenda to teach “woke ideology” in Alberta schools.

Fear mongering over “woke ideology” and “critical race theory” has become a  favourite tactic of American Republican figures like former President Donald Trump, Florida Governor Ron DeSantis and Fox News’ Tucker Carlson, who have used it to justify attempts to shut down free speech on racial justice and gender equality.

Speaking to a room of “screened and invited” UCP supporters at a campaign launch event at the Red Deer Sheraton Hotel, Kenney took credit for ending Alberta NDP’s “ideological” curriculum, which he equated with right-wing talking points frequently pushed by Republicans like Trump, DeSantis and Carlson.

“We reversed the NDP’s attack on parental authority in education and ended their war on faith-based education,” Kenney said. “We did shred the NDP’s ideological curriculum rewrite and we began carefully developing a modernized curriculum that gets back to basics in math and reading with balanced content on our history and institutions.”

Kenney added: “Instead of divisive woke-left ideology like critical race theory, cancel culture, and age inappropriate sex education, we are putting kids and the authority of parents back in charge of our education system.”

The head of the professional association that represents over 40,000 teachers in the province said Kenney’s culture war rhetoric is “dangerous” and “dishonest.”

“I find it to be pure utter nonsense,” Alberta Teachers’ Association President Jason Schilling told PressProgress. “The comments the premier said are quite dangerous and are relatively dishonest.”

“He invited a lot of rhetoric that I see stateside around the issues he identified and I think that if he had a sense of what the reality of Alberta classrooms were today he wouldn’t have made those comments.”

Kenney’s comments came as educators in the province began protesting the K-6 curriculum, released Wednesday, calling for it to be scrapped.

Others suggest Kenney is turning to “Fox News-style” rhetoric over education in a bid to shore up his right-wing base during a the leadership review.

“It is no question that the education curriculum is one of Jason Kenney’s last remaining vestiges of political pride,” Wing Li, Communications Director of the grassroots advocacy organization Support Our Students Alberta, told PressProgress. “It is one of his Hail Mary’s.”

“He was fully embracing right-wing dog whistles in his Leadership Review speech to discredit the former draft and appeal to the rightmost section of his base at this leadership review.”

Teresa Fowler, assistant professor in the Faculty of Education at Concordia University of Edmonton, said the “language of the speech is certainly problematic,” noting Kenney is using “the language of going to war” to describe a change to a K-6 education curriculum.

Fowler, who has written on curricula approaches across the ten provinces, questioned Kenney’s inclusion of “critical race theory” as a form of so-called “woke-left ideology.”

“When Kenney states that the previous curriculum, despite its support from parents, teachers and the academic community, leads to ‘toxic ideas’ stemming from, as Kenney states, ‘woke-left ideology like critical race theory, cancel culture, and age inappropriate sex education’ to me is an indication of the positive work CRT is doing,” Fowler told PressProgress.

“CRT promotes an awareness of the layers of experiences each one of us has and for far too long the curriculum in schools has been one of a single experience, no diversity of knowledges, languages, or other ways of being — no room for counter-stories,” Fowler pointed out.

“What is Kenney afraid of?”

Ballots for Kenney’s leadership review will be counted on May 18.