A new grass fire is flaring up for Jason Kenney and his United Conservative Party, this time involving a star candidate handpicked by Kenney himself.

In a letter to UCP Executive Director Janice Harrington obtained by PressProgress, nine members of the UCP’s Calgary – Mountain View board of directors demand an immediate investigation into UCP nomination candidate Caylan Ford.

The nine board members say they believe Ford may have “deliberately misled” the party over her residency in an attempt to “fraudulently circumvent” UCP rules. 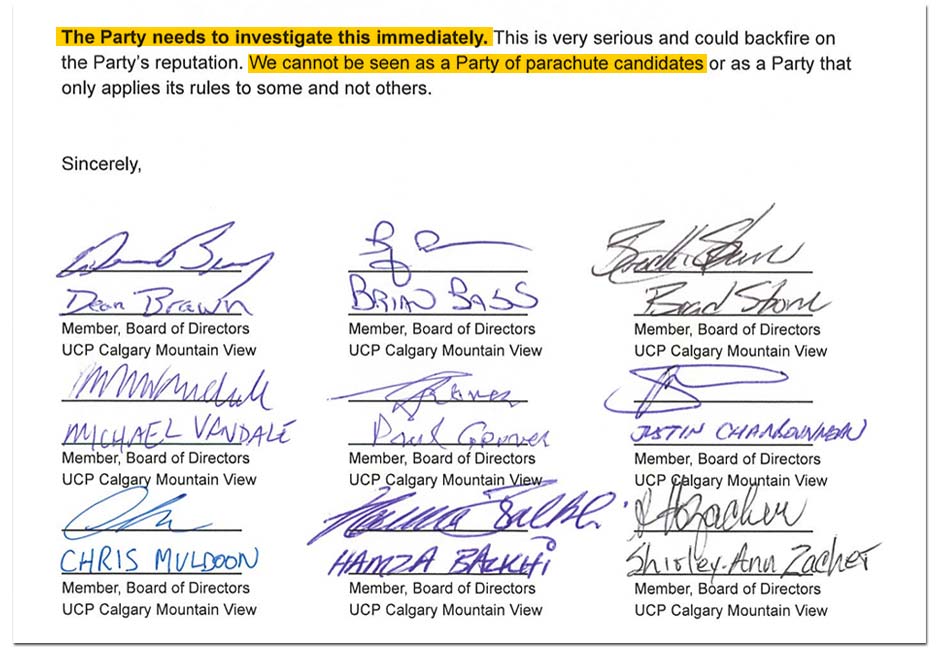 “It is our understanding that this contestant may have deliberately misled the party and the local membership about her residential history in Alberta,” the letter states.

Noting party policy requires “UCP candidates to have physically lived on Alberta soil for one year before becoming a UCP candidate,” the letter suggests Ford bought her party membership weeks before she actually moved to Calgary.

According to their timeline, which provides quite specific dates, Ford applied for an Alberta driver’s license and health card during a “30-hour trip” to Calgary between  December 20-21, 2017. The letter goes on to claim she bought her UCP membership on January 22nd, 2018 and permanently moved to Calgary on February 13th, 2018.

“If this is true,” the nine UCP board members say, “this would constitute deliberate misrepresentation to the party she now wants to run for as a candidate, and an attempt to fraudulently circumvent our party’s founding membership rules.”

Kenney has already punted several individuals from the party specifically on the grounds that they failed to disclose information or made misleading statements to party brass, notably Derek Fildebrandt, Dale Johnson and most recently Lance Coulter – who failed to tell the party that he was familiar with a white supremacist hate group before taking photos with them.

“Will the party revoke the membership of someone who deliberately lied or tried to conceal her residency status?” the UCP board members ask.

The letter concludes by accusing the party of ignoring “grassroots voices” in favour of cutting “insider deals.”

In a statement to local political blog daveberta.ca, Ford suggested the nine members on her constituency association’s board are “misinformed” about UCP rules:

“The board members who signed this letter were misinformed. They also appear to have misunderstood the UCP’s residency requirements. A good faith mistake, I am sure.”

According to the National Post, Kenney personally encouraged Ford to run for the UCP after the Oxford University graduate confronted him at a meet-and-greet to correct him on misquoting conservative philosopher Edmund Burke.

Kenney described the encounter as “political love at first sight.”

Over the last year, Ford has been showcased at high-profile conservative events, such as the 2018 Manning Centre conference in Ottawa.

Daveberta.ca notes one of the signatories to the letter is board member Dean Brawn, who withdrew his candidacy for the riding in July and now serves as Chief Financial Officer for rival Calgary – Mountain View nomination candidate Mark Hlady.

Read the full letter below: