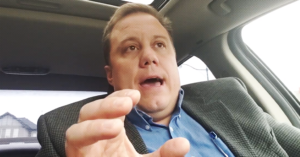 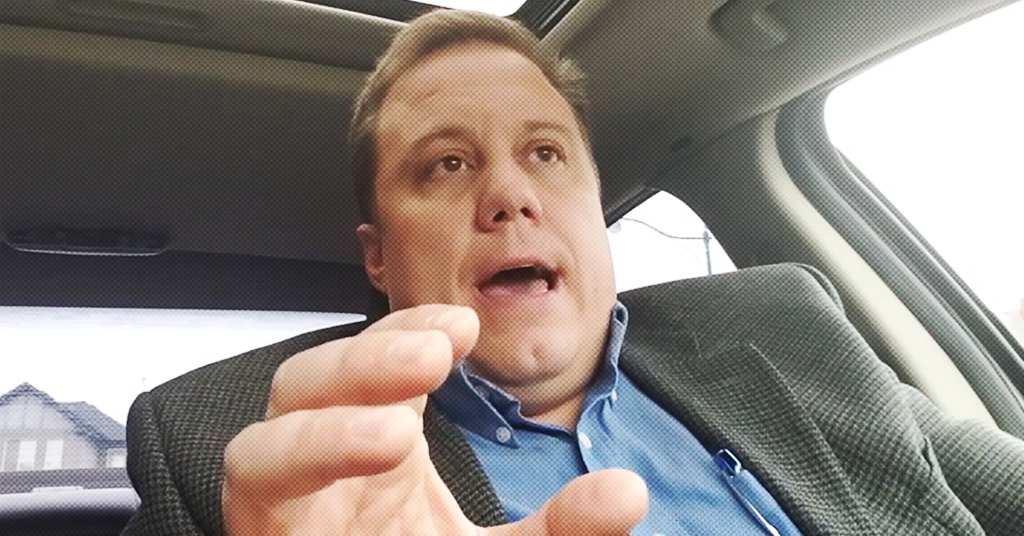 A UCP nomination candidate voiced his support for a secret campaign targeting Alberta’s religious and private schools with “anonymous letters” to raise fears about a law aimed at protecting students in Gay-Straight Alliance clubs.

The unusual proposal was floated during a recent presentation for the anti-LGBTQ group Parents for Choice in Education that was hosted by Brad Leishman, a United Conservative Party nomination contestant in Calgary-Shaw.

PCE is a well-connected UCP ally that pushes for public funding for religious and private schools. The group vigorously opposes legislation aimed at protecting LGBTQ students in Alberta schools and is currently mobilizing its supporters to back UCP candidates who will repeal Bill 24, a law that protects the privacy of students who get involved with a GSA.

Last year, UCP leader Jason Kenney was widely criticized after he ordered his party to vote against Bill 24.

In an exclusive recording from the PCE presentation Leishman hosted in Calgary earlier this month, the UCP hopeful is heard advising the group to send “anonymous letters” to principals warning them about the dangers of GSAs. 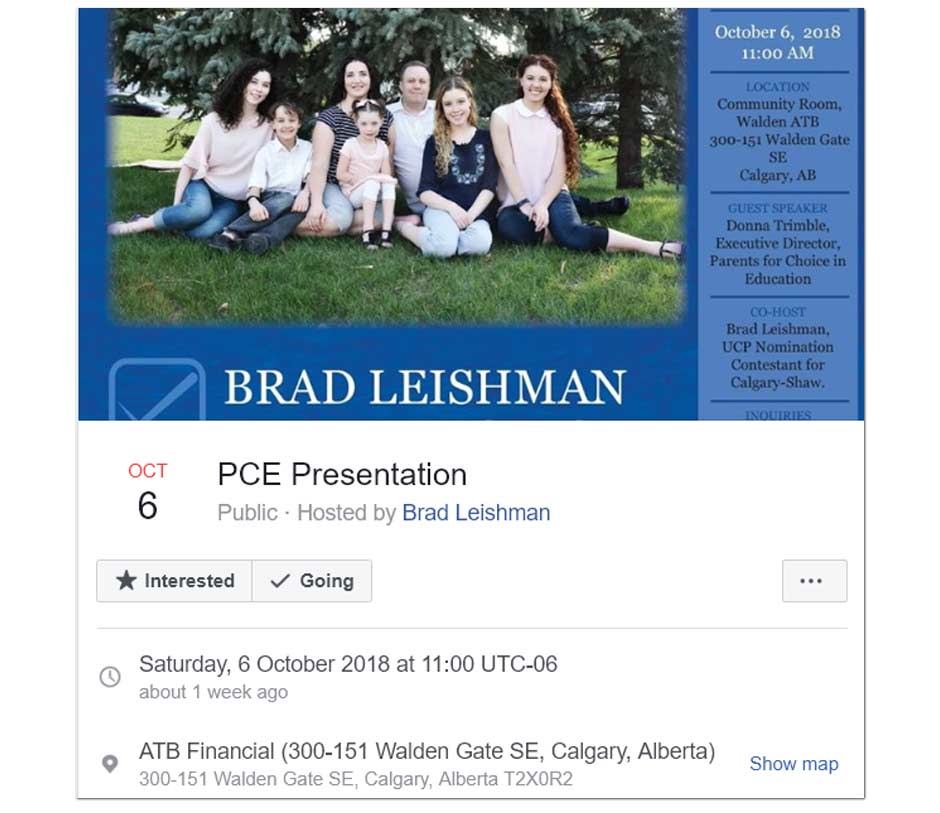 During the presentation, Leishman complained that as a result of Bill 24, “two of my contacts with one of the biggest Christian schools in town here don’t know what that school stands for anymore.”

“That’s sad,” Leishman told the group. “That is terribly sad.”

One anti-LGBTQ activist suggested sending an “anonymous letter” to the principals of Christian schools warning them about the consequences of Bill 24 and GSAs more broadly, with the idea that the principals would distribute their message to parents.

As the activist explained, any information seen to come from PCE would carry little credibility because the group is routinely “smeared” by the media.

Although PCE Executive Director Donna Trimble disagreed that the media is “wholly at war” with the group, Leishman claimed the “mainstream media” in Alberta is biased in favour of the NDP and the “extreme progressive left.”

“I think there’s definitely that wing of the mainstream media that jumps on the NDP bandwagon and smear anything that doesn’t conform with the extreme progressive left,” Leishman said.

To get around the media, Leishman suggested: “I think there could be some advantages to doing that anonymous letter.”

Leishman continued, advising that in addition to targeting principals at Catholic schools, there could be “certain charter schools” who might be on board with disseminating the group’s anonymous letter too.

But Leishman added: “with public schools, yeah there’s no hope.”

A PCE brochure distributed at the event warns Bill 24, which prohibits schools from outing students involved in GSAs, will “isolate children and control schools.”

The brochure falsely claims Bill 24 will “provide sexual content to K-12 children without parents knowing,” such as websites that display “sexually graphic material.”

It also claims schools will now be forced into activities that “push political activism and social change and the principal, by law, must say yes.” 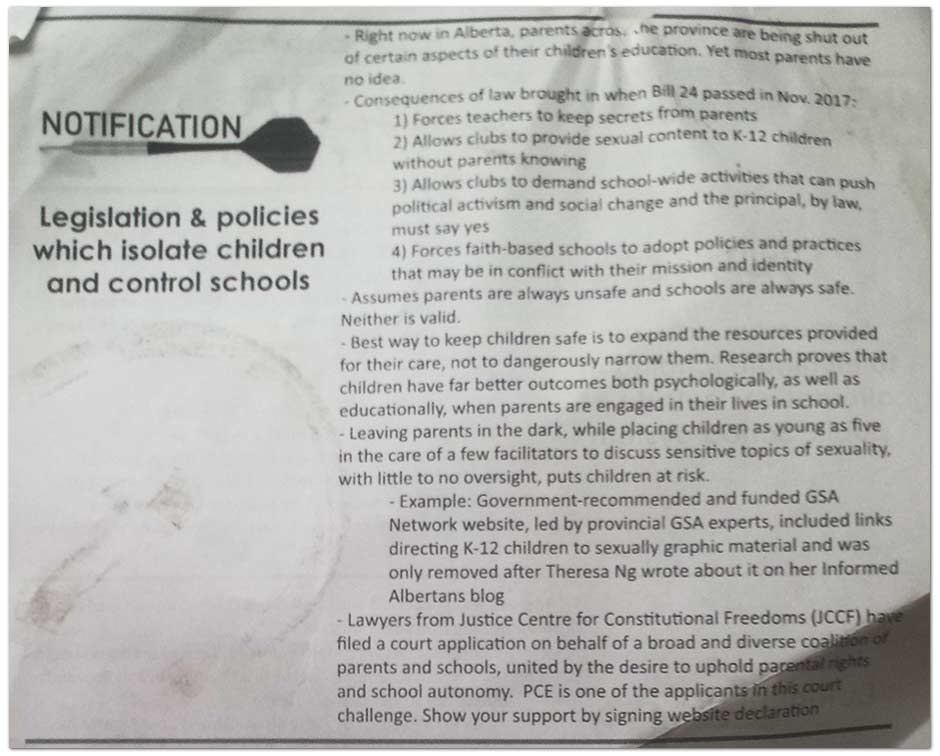 Parents for Choice in Education

PCE is currently involved in a legal battle against Bill 24. The original court challenge was shot down by the Alberta Court of Queens Bench in June, but the coalition plans to appeal the decision on December 3.

PCE is rooted in anti-abortion and anti LGBTQ groups. It’s board of directors has strong social conservative connections, including directors that head anti-abortion groups, run private religious schools as well as a former candidate for the Christian Heritage Party. One director, Reverend Brian Caldwell, says he has a “duty to protect the flock of God” by not allowing “gay activists” to corrupt children in his publicly funded private schools

In an appearance on the far-right Rebel Media, the group warned of “radical gender fluid theory creeping into Alberta schools.”

In 2016, PCE published a report on their website that compared being transgender to having a condition like anorexia and denounced the Alberta Ministry of Education as “naive and oppressive” for refusing to refer children to programs that “repair” a student’s “gender identity” or convert their “sexual orientation.”

In June of last year PCE attended a social conservative conference where they stated that “the family is under attack” by Alberta’s Education Ministry.