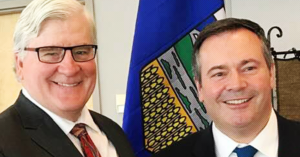 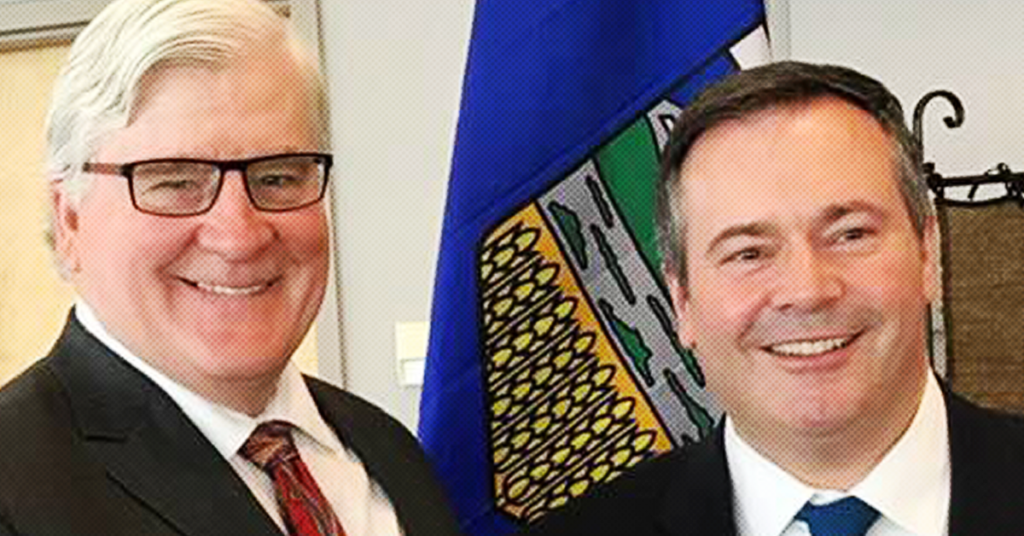 Another one of Jason Kenney’s United Conservative Party candidates is under fire for spreading “dangerous myths and misinformation” targeting LGBTQ2+ Albertans.

While experts note the “bathroom predator myth” has absolutely no basis in reality, Dorward’s statements are twice as remarkable considering the guidelines are the by-product of Bill 10 — legislation Dorward’s own government introduced. 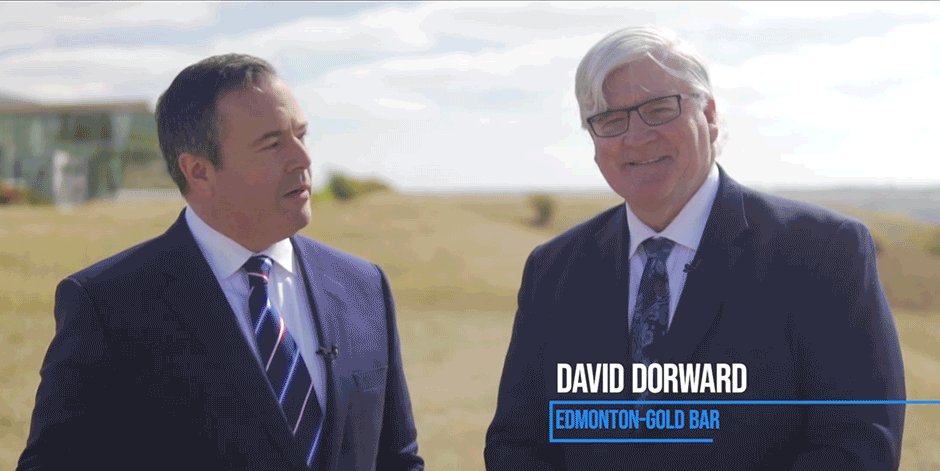 This weekend, UCP candidate Eva Kiryakos resigned after admitting she made racist and transphobic statements. In one instance, the disgraced UCP candidate pointed to the same gender inclusive washroom guidelines as evidence that school children are being “brainwashed” to accept “perversions.”

Kenney later praised the disgraced candidate for her “selfless decision” to resign.

In a February 2016 message on Facebook, Dorward shared a Seattle news story about gender inclusive washrooms and offered an apples to oranges comparison with Alberta schools.

“Get ready Alberta schools,” Dorward wrote. “This isn’t just about a child going into a child’s washroom.”

“Any self-declaring transgender man (woman) will be able to walk into a girls (boys) washroom or change room in a school.” 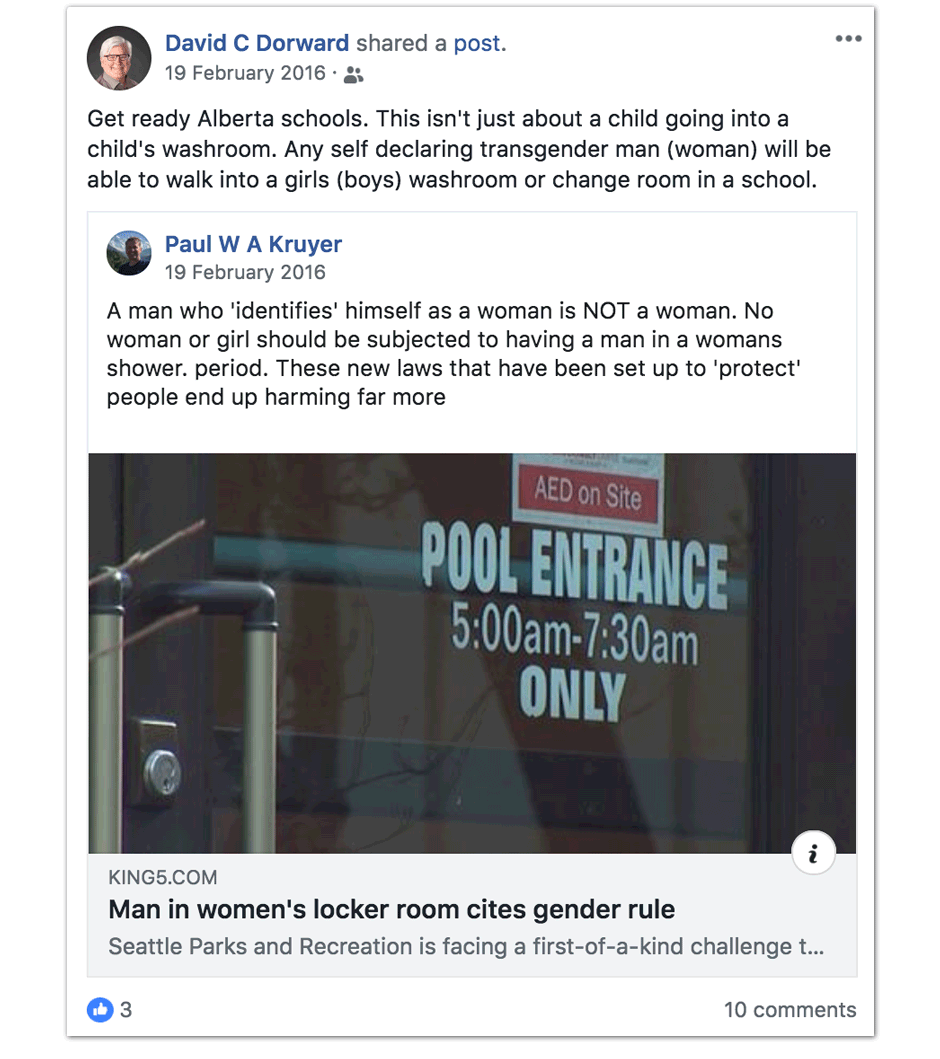 In the comments section of his post, one of the UCP candidate’s friends accused him of spreading “misinformation,” something Dorward was quick to dispute.

“How does the post spread misinformation?” Dorward asked. “Will a school be able to ban a man identifying as a woman from going in a girls in the school?”

“My post said that an adult born male can self identify as a female and go to a girls washroom in a school,” reiterated, later explaining “I’m all over safety in schools.”

The idea that school administrators would be powerless to stop random adults from wandering into schools off the street and hang out in girls’ bathrooms might seem far-fetched, but Dorward insisted this was a risk based on “transgender folk” whom he personally knows.

“I know transgender folk who will walk into schools and go to girls washrooms.”

He added that “folks need to understand” the implications of the LGBTQ2+ inclusive policies Education Minister David Eggen is “forcing down their throats.”

Dorward did not respond to multiple requests for comment from PressProgress, although a few members of Alberta’s trans community did.

Max Quilliam, a trans organizer based in Edmonton who works with transgender and gender non-conforming youth, said it’s “incredibly scary” someone like Dorward could hold “power over my community” and “impose laws that could impact my life.”

Quilliam described Dorward’s remarks as “hateful and discriminatory rhetoric” that only “dehumanizes and demonizes transgender people,” noting the UCP candidate does not acknowledge “the importance of gender neutral washrooms in schools.”

“The fact of the matter is that there are transgender and gender non-conforming students in schools who feel safer in these washrooms, and removing access to gender neutral facilities will not change this,” Quilliam told PressProgress.

Likewise, Aria Burrell, a policy student at Mount Royal University who works with LGBTQ2+ advocacy groups, said that the UCP candidate uses the same language as “bigots and fearmongers.”

“Bathroom scares and fearmongering about predators have been around for decades and used to be aimed at gay men and women,” Burrell told PressProgress. “Now they’ve just painted the target on trans people instead.”

Burrell called Dorward’s claims “absurd,” pointing out that “we already have laws addressing bathroom predators” and wondered why he ignores “predators who are (cisgender) men and women.”

Policy experts agree Dorward’s statements are “not substantiated in any basis of reality,” something which is not only “ill-informed” but also “dangerous” considering “transgender youth continue to be one of the most vulnerable groups of students in our schools today.”

“Gender inclusive washrooms have been the norm in many schools in Alberta for the past several years,” MacEwan University Health and Community Studies Professor Kristopher Wells told PressProgress.

“There has not been one documented instance of a so-called ‘bathroom predator’ in any school in Alberta,” Wells said.

Wells called Dorward’s comments are “completely transphobic” and added they should be “loudly condemned.”

“These kinds of discriminatory comments clearly indicate that this candidate is unfit for public office and should immediately resign.”

On Monday, Kenney announced that a UCP government would scrap laws designed to protect LGBTQ2+ students in Alberta schools, including rolling back the rules on gay-straight alliances.