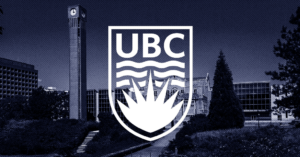 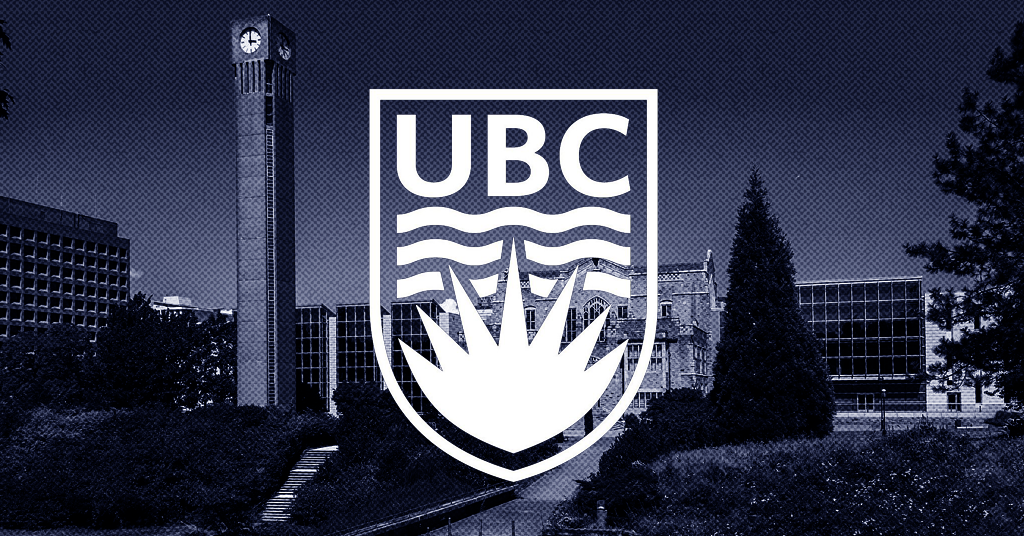 “Would it have been better if I didn’t tick it? Sure, and I wish I probably hadn’t. I probably did it late at night.”

The Chair of the University of British Columbia’s Board of Governors says he “regrets” liking a number of tweets criticizing Black Lives Matter, including one tweet that compares the anti-racist movement to Nazi brownshirts.

“It is a mistake on my part to have ticked some boxes, but that’s just not who I am and it’s not what I believe,” UBC Chair Michael Korenberg told PressProgress.

“The Board of Governors and I personally are united in opposition to racism and hatred in any form,” he said, adding that “racism and bias have no place in our community and we have zero tolerance for it.”

Korenberg’s Twitter likes, first brought to light by UBC Students Against Bigotry, come just over a week after UBC parted ways with a mens basketball coach who himself liked a tweet calling Black Lives Matter a “leftist lie.” 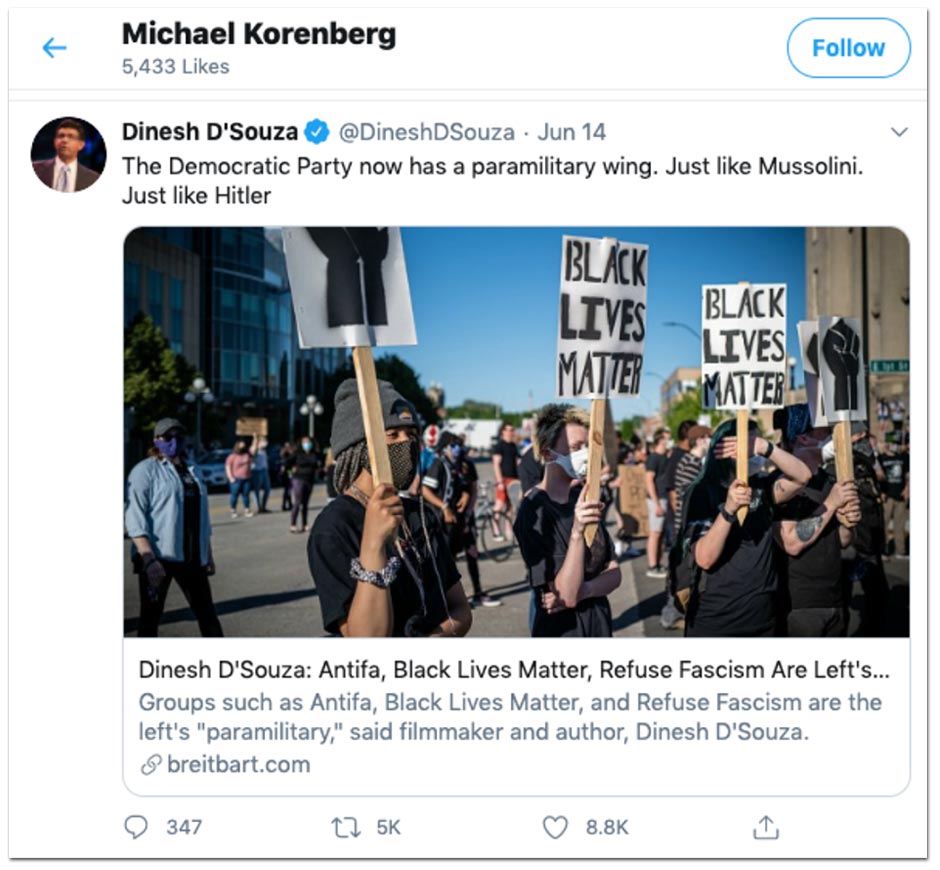 Korenberg, who previously served as the deputy chair of the Jim Pattison Group, stressed that the university community should not view his apparent endorsement of the tweet as a reflection of his personal views about Black Lives Matter.

“Do I support Black Lives Matter and the community broadly? I do,” Korenberg told PressProgress. “I believe in the objectives that they espouse.”

“I am not in favour of paramilitary organizations anywhere or physical assaults,” he explained. “That was the concern I was trying to express.”

“Would I characterize Black Lives Matter as a paramilitary organization? Absolutely not. I believe that they are a political organization advancing social change is the bottom line. Do some members, like members of almost any organization, go too far at times? I’m sure they do.”

In retrospect, the UBC Chair admitted he probably shouldn’t have liked the tweet.

“Would it have been better if I didn’t tick it? Sure, and I wish I probably hadn’t,” he told PressProgress. “I probably did it late at night.”

“I regret it if anyone would interpret it as me supporting anything that is contrary to trying to move forward in support of a different approach where clearly unacceptable actions have been taken.”

The UBC Board Chair also liked a tweet authored by Anne Coulter, who quoted an article blaming the “Antifa and BLM ideology” for “the destruction of businesses we’re witnessing across the US.” 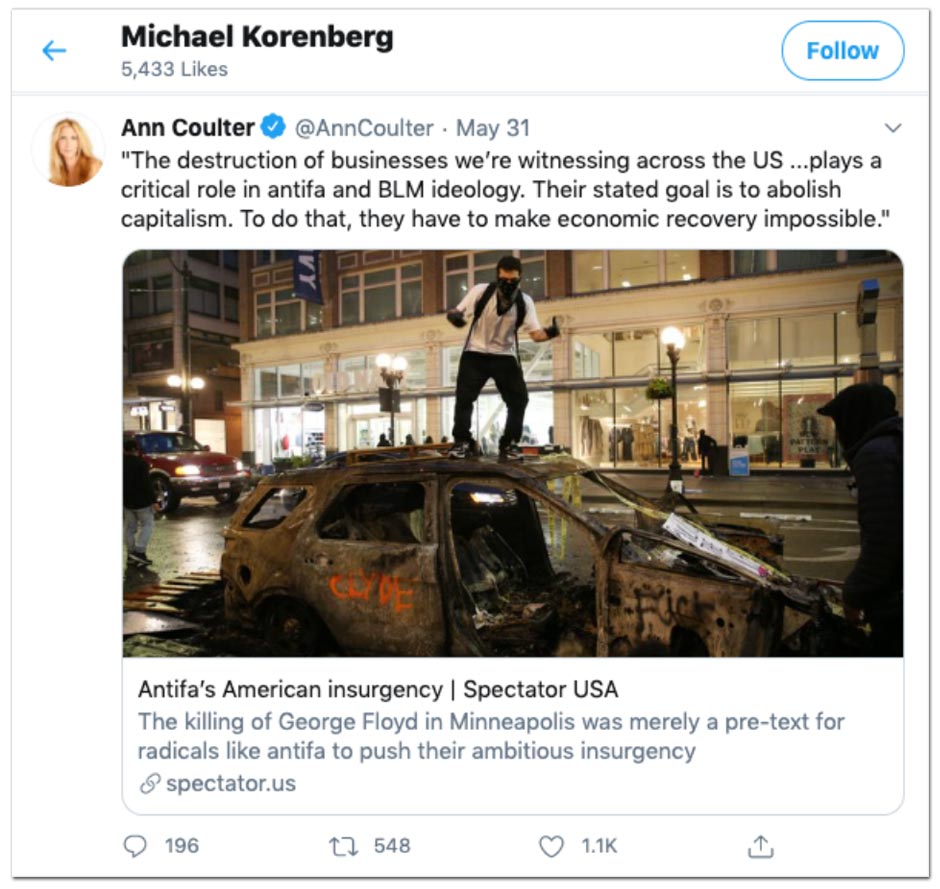 Korenberg said he finds Coulter’s views “quite repugnant personally,” but liked her tweet as an expression of his support for non-violence.

“I don’t believe in physically assaulting people, that’s the thing that I find troubling,” Korenberg said. “Any time I see evidence of somebody being struck or hit, or being attacked, it repulses me and I react to it.”

“I think I had probably been watching the news and had seen a woman be punched outside the front of her business by someone who was identified as Antifa, who was wearing a mask, and I just think it’s wrong,” he explained.

Antifa is short for “anti-fascist” and refers to groups that disrupt far-right events and confront hate groups, although they are largely self-organizing and are not an “organization” in any traditional top-down sense of the term.

Korenberg said he could not say if Antifa should be declared a terrorist organization because he wasn’t sure “if Antifa exists in Canada.”

“It seems to me that there are terrorist groups on both sides,” he elaborated.

“Do I think that they commit acts of terror? I do. But does it mean that I think every person who has ever gone to a rally thinks that way, that they would employ physical violence? Absolutely, I don’t. And do I know what it means to be designated as a terror organization? I do not.” 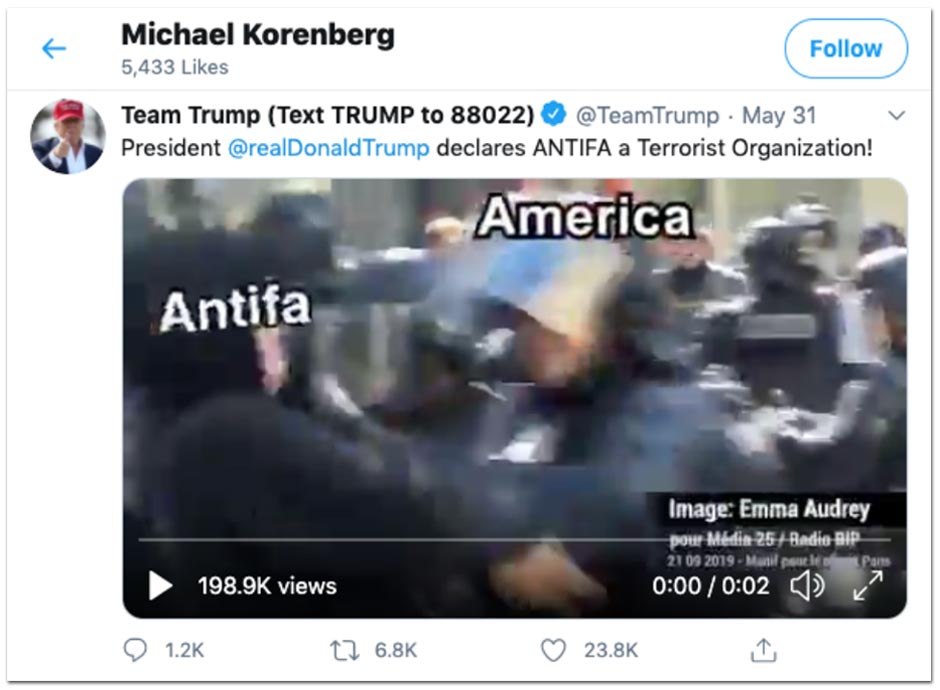 “Just to be clear, I’m not a regular user of Twitter,” Korenberg cautioned.

“If I tap it, it’s generally just to say: ‘Okay, I looked at it or I read it’, that’s all I’m attempting to do, I’m not trying to express a political or otherwise opinion.”

According to Twitter’s Help Centre, “likes are represented by a small heart and are used to show appreciation for a Tweet.” 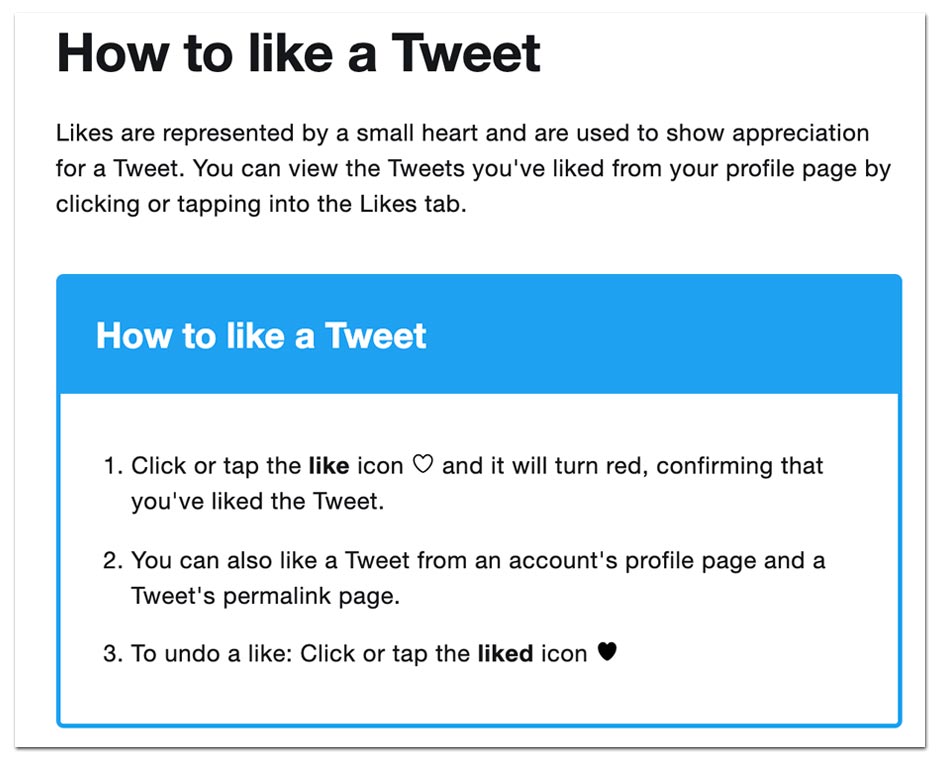 In addition to liking tweets criticizing Black Lives Matter, the UBC Board Chair has also liked dozens of tweets connected to pro-Trump and Fox News accounts — as well as a handful of posts promoting anti-racist initiatives on UBC’s campus.

Earlier this year, PressProgress reported Korenberg and other UBC administrators  faced widespread criticism after allowing an anti-LGBTQ speaker with no connection to the university community to give a speech attacking BC’s SOGI-123 anti-bullying initiative on UBC’s Point Grey campus.

Another email showed Korenberg admitted the decision to provide a platform to the anti-LGBTQ speaker caused a “black eye for the university” after the university’s decision led to UBC being banned from the 2019 Vancouver Pride Parade.

Update (June 20): Following publication of this article, UBC announced Michael Korenberg had submitted his resignation as Chair of UBC’s Board of Governors and stepped away from the Board.

In a statement, the university stated: “UBC Board of Governors Chair, Michael Korenberg, has informed the Board and the university that he is stepping down from his role effective immediately.”

“His decision comes after information that was publicized last week about his social media interactions that appeared to support regressive voices online and undermine legitimate protest.”

In his resignation letter, Korenberg wrote “Some of my interactions with social media have thoughtlessly supported regressive voices that are attempting to discredit broad-based, legal and necessary protest. As a result, my interactions have been interpreted in a manner that creates questions about who I am and what I believe in.”

“I wholeheartedly apologize for them, particularly to the students, faculty and staff of UBC.”

Clarification (June 19): This story has been updated to credit the group ‘UBC Students Against Bigotry’ by name for first surfacing the UBC Chair’s pro-Trump and right-wing Twitter likes. The original version of this story supplied a link to the group’s Twitter thread, but did not credit them by name.

While this story builds on information from the group’s Twitter thread, the specific Black Lives Matter tweets cited in this story were independently sourced by PressProgress and provided to Korenberg for independent verification and comment.