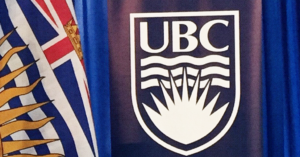 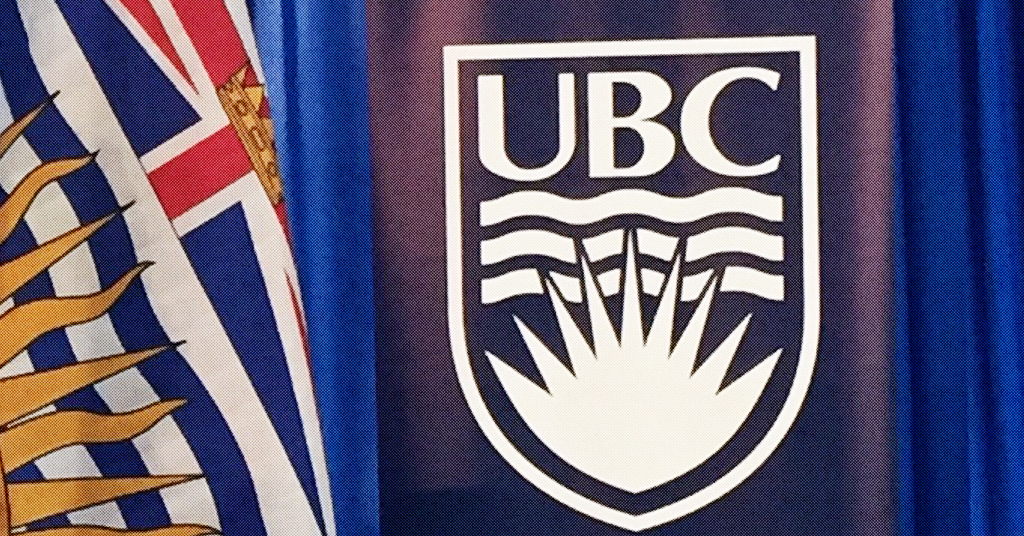 ‘Black Eye for the University’: UBC Board Admitted It Mismanaged ‘Alt-Right’ Event on Campus, E-Mails Show

The Chair of the University of British Columbia’s Board of Governors privately grumbled that UBC had given itself a “black eye” after the university was banned from Vancouver’s Pride Parade for green lighting an “alt-right” event on campus.

PressProgress previously reported UBC’s risk management team actively monitored an “alt-right” group that was planning to show up to the event — as well as faculty members who publicly criticized administrators about their handling of the event.

Internal e-mails newly obtained by PressProgress through Freedom of Information show top members of UBC’s Board also expressed their growing frustration with the school’s public statements and handling of the event.

One e-mail, sent July 9, shows UBC governor Charles Menzies wrote to UBC Board Chair Michael Korenberg and UBC President Santa Ono, both of whom previously issued statements in support of the decision to green light the event.

In his e-mail, Menzies told UBC’s Board Chair that the decision to let the alt-right event go ahead in the first place demonstrated a “serious misconception around the issues of the role of the university in promoting academic freedom.”

“This talk was purely a commercial venture,” Menzies continued. “It was not a university activity in any sense and the materials in the presentation do not fit within any recognized academic tradition that would merit the protections of academic freedom.”

The UBC Board member called the pride society’s decision a “serious embarrassment to the university.” 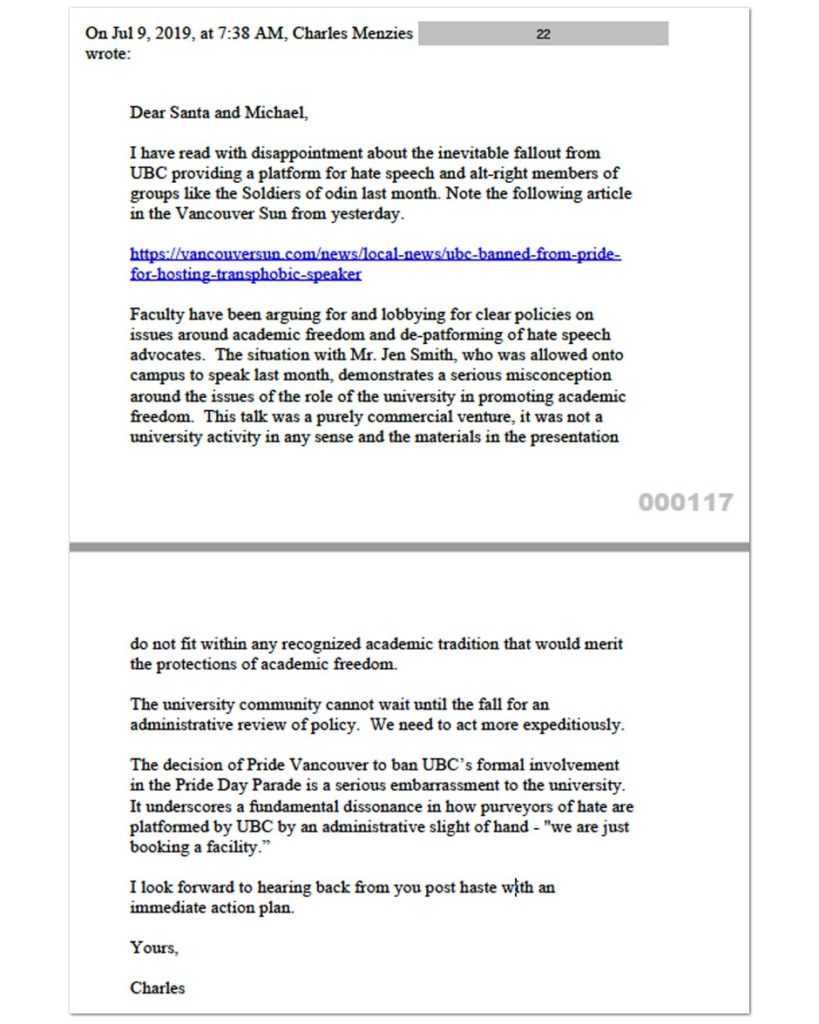 In his response, UBC Board Chair Michael Korenberg agreed that UBC’s exclusion from Vancouver Pride had damaged the university’s image.

“The decision of the Vancouver Pride Committee to exclude UBC from being an official entrant in the Pride Parade / associated events is a ‘black eye’ for the university,” Korenberg wrote in his reply to Menzies.

“I also believe that the whole situation should / could have been much better managed.” 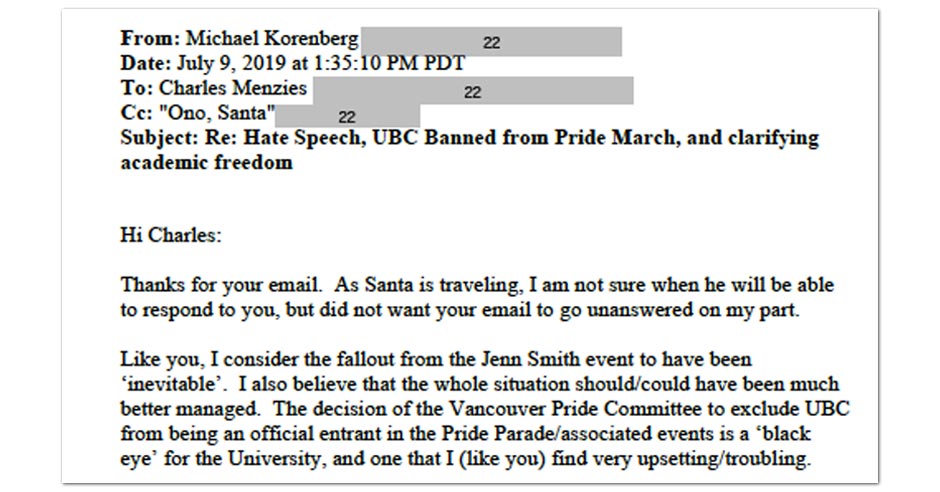 The Board Chair added: “That committee will be asked to consider its decision as it relates to next year’s Pride Parade / event.”

On July 10, Menzies replied that he felt “reassured” by Korenberg’s response, but outlined further concerns about the university’s mishandling of the alt-right event.

“Up to now our university administration has been ineffectual in addressing these problems and has continuously used their problematic notion of academic freedom to wipe their hands of making any effective decision,” he wrote. 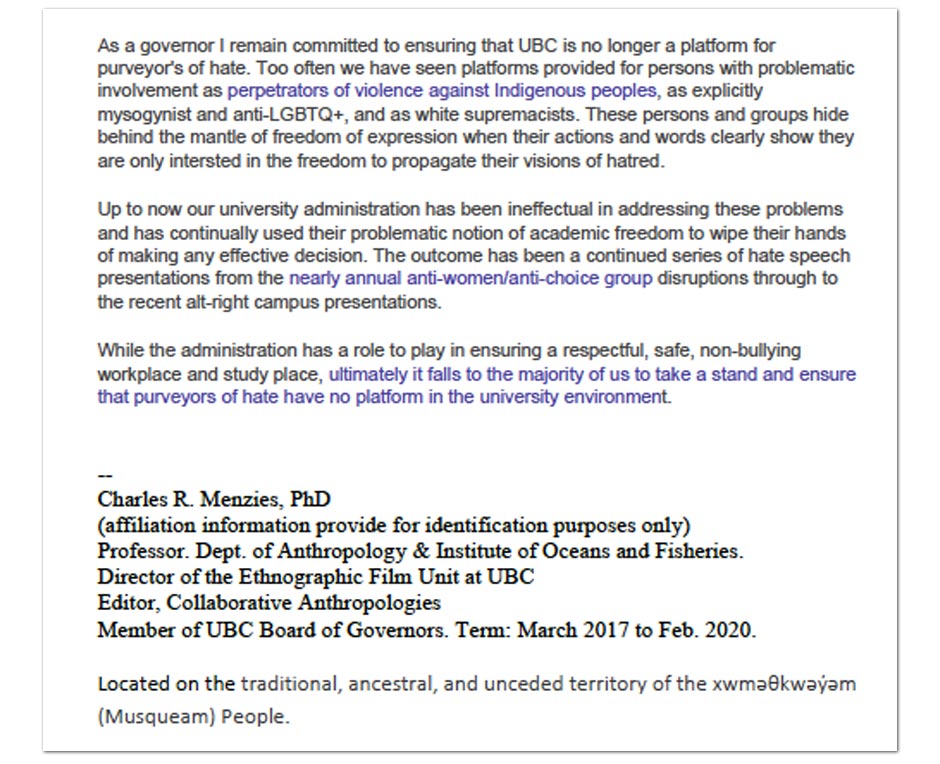 Menzies, who stressed he was speaking to PressProgress as a faculty member rather than as a member of UBC’s Board of Governors, questioned whether administrators truly understand what “academic freedom” means.

“In general with these types of events there’s a confusion between freedom of expression in the American sense of the word, and the academic freedom in the Canadian context in which it’s developed,” Menzies told PressProgress.

“The university, ironically enough, is a private entity, and it has a lot of protection in terms of deciding who it wants on or off campus, so it’s not obligated to let anyone on,” he added.

Neither the speaker nor organizers of the anti-SOGI event were members of the UBC community. The speaker does have reported ties to the Soldiers of Odin, an anti-Muslim hate group with neo-Nazi origins and other white supremacist links.

At the time, Vancouver Pride Society said the decision was made due to UBC’s decision to “provide a platform for transphobic hate speech.”

Following that announcement, the UBC Board of Governors received an e-mail containing a link to a news article about the decision. 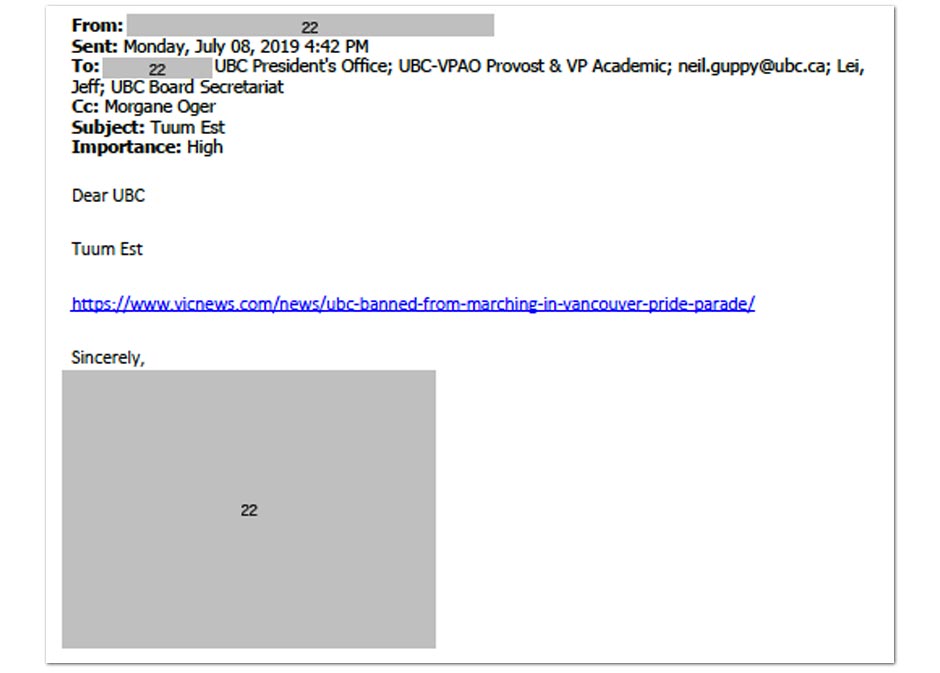 E-mail to UBC Board of Governors

Korenberg, who was appointed to the UBC Board of Governors by the province in 2016 and elected Chair in 2018, declined to answer any questions from PressProgress about the university’s handling of the “alt-right” event.

Although he later described the fiasco as a “black eye for the university,” Korenberg was initially among those who backed the university’s decision to allow the event to go forward, citing “academic freedom.”

In addition to his work at UBC, Korenberg also serves on the board of HSBC Canada and KP Tissues, maker of Scotties kleenex and White Swan bathroom tissues.

Korenberg previously served as the deputy chair of the Jim Pattison Group, a major billboard company that made headlines during his time as director over its refusals to run ads paid for by environmental groups that criticized the fossil fuel industry.

Corrections: This article has been updated to fix an error which had caused the image of one of the cited e-mails to be displayed twice in a row. It has also been updated to clarify that Michael Korenberg is no longer a director with Pattison.