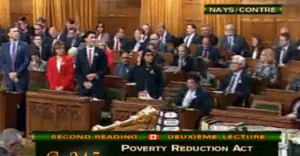 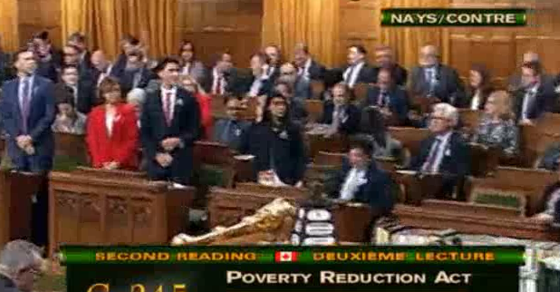 Prime Minister Justin Trudeau, 156 Liberal MPs plus every Conservative MP in the House of Commons voted against the bill.

Well, it was worth the shot.

One in seven Canadians currently live in poverty, but Liberal and Conservative MPs voted together Tuesday night to defeat Bill C-245 which called for the creation of a “national poverty reduction strategy in Canada.”

Prime Minister Justin Trudeau, 156 Liberal MPs plus every Conservative MP in the House of Commons voted against the bill – although five Liberal MPs broke ranks and voted in favour of the private member’s bill sponsored by NDP MP Brigitte Sansoucy.

The bill had called for “the development and implementation of a national strategy to reduce poverty in Canada and the appointment of an independent poverty reduction commissioner.”

While the proposed legislation noted that Parliament had unanimously voted 25 years earlier to end child poverty and that “structural circumstances” drive poverty in Indigenous communities, the other thing is Trudeau’s 2015 mandate letter to the Minister of Employment and Social Development explicitly called for “the development of a Canadian Poverty Reduction Strategy.”

Liberals say they’re already at work opening “a dialogue on the subject of poverty reduction in Canada,” pointing to a “backgrounder” tabled in October offering a series of factoids and general statistics on poverty in Canada.

But the opposition says the Liberal government is already “more than a year into their mandate” and “have yet to take any action on providing a poverty strategy for Canada” – not to mention vague about their plans moving forward.

C-245 had been endorsed by dozens of anti-poverty groups, charities and religious organizations across the country.

Here’s what a few of them told PressProgress about why it matters to their work:

One of the largest homeless shelters in Canada (Montréal, Québec)

“If we cannot see a society without poverty, we cannot achieve one. If we do not plan to end poverty, we will not end it. Bill C-245 … holds the promise of moving yardsticks people have assumed will not budge. Homelessness is just one of the more egregious examples of poverty allowed to persist when we know full well affordable options exist to end it.”

“As archbishop emeritus of the Archdiocese of Keewatin-The Pas, I support Bill C-245, which would establish a national poverty reduction strategy. Here in Edmonton, great strides have been made to reduce if not eliminate homelessness. We truly need this bill to help make the reduction of poverty a national endeavor. A nation is only as great as it treats the most vulnerable among us. There are many who for a variety of reasons have fallen through the cracks and through the social net. Every human being is to be treated with equal dignity and respect. We have the ability – all we need is the will to reduce poverty in our country, and this bill would be a great step in the right direction.”

“Bill C-245, would be an excellent means to improve the circumstances of single-parent households, in particular, those of women-lead households. Far too many of these families are still profoundly affected by poverty in Canada and do not have access to stable, affordable housing. What’s more, it is essential to improve accessibility to continuing education for single-parents and to put into place more effective measures to help balance the demands of family, work, and studies (notably quality childcare).”

“CPJ, for many years, has been pushing for the development of a national anti-poverty plan that is legislated, providing a rights-based framework for accountability, along with firm targets and timelines to reach its goals. The Poverty Reduction Act would establish such a framework, strengthening the effectiveness of the federal government’s Canadian Poverty Reduction Strategy, and ensuring that it would be less vulnerable to shifts in government. Parliamentary and Senate Committees have also called for such action, as have over 700 organizations, members of Dignity for All: The Campaign for a Poverty-free Canada. It’s long past time to act!”

Here’s a full list of every organization that publicly endorsed C-245:

• City for all women

• Justice for Children and Youth

• The National Council on Poverty Elimination and Social Inclusion