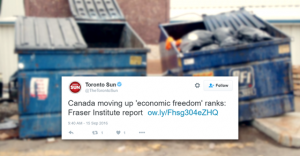 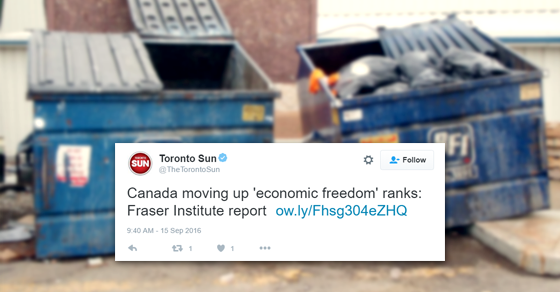 Politically-charged language from the Fraser Institute's press release appears to directly account for 25.5% of the Sun's 219-word news article.

What’s the point of the Toronto Sun if you can find the same thing on the Fraser Institute’s website?

Sun readers might ask themselves that question after the Postmedia-owned newspaper appeared to copy/paste a substantial bit of language straight out of the right-wing think tank’s press release for a news story that offers readers zero context or critical reflection.

In a news report on the Fraser Institute’s latest “economic freedom of the world” rankings last week, the Sun patriotically announces that it’s time to “throw some confetti” because “Canada has moved into the top five among the world’s most economically free countries.”

That might sound like Canada’s on the right track, but beware: Canadian freedom could be in jeopardy!

The Sun observes that “Canada’s political landscape has shifted” since the Fraser Institute’s 2014 data was collected, and adds that the Fraser Institute warns “increased taxes” and “regulations on industry and business” will “jeopardize” Canada’s “economic freedom.” Although the Sun attributes the warning to the “think-tank,” the unfiltered string of words are presented without quotations and without any apparent attempt to even specify which taxes and regulations the Fraser Institute is referring to.

Along with another cookie-cutter quote included in the original press release, politically-charged language from the Fraser Institute’s press release appears to directly account for 25.5% of the Sun’s 219-word news article.

An additional three paragraphs, representing 42.5% of the words in the article, mainly appear to paraphrase the original press release.

And if the Sun puts that much effort into critical reporting, it begs the question: what else is slipping by?

For starters, the Sun makes no mention that the Fraser Institute’s “economic freedom” index has been repeatedly criticized in recent years.

In 2014, a United Nations agency issued multiple reports calling attention to serious methodological problems hiding under the hood of the think tank’s index.

In fact, the UN’s International Labour Office went so far as to warn that the credibility of any research that relies on the Fraser Institute’s index is compromised by “significant flaws”:

“Our findings call into question most of the empirical results of these papers and policy advice based on them.”

As one specific example, the UN agency notes the Fraser Institute’s section ranking countries on their quality of regulations protecting workers is completely distorted by the think tank’s bizarre use of data on “military conscription.”

The UN agency said conscription had “the least apparent relevance to the degree of Labour Market Regulations” and that data from this one variable alone “fully drives the overall results”:

Toronto Sun readers also might be interested to learn that the Fraser Institute consistently ranks a place with no free elections as number one for “economic freedom.”

Hong Kong has placed at the top of the Fraser Institute’s rankings since 1970, something that ends up being used to validate the status quo under Hong Kong’s Chinese-backed administration.