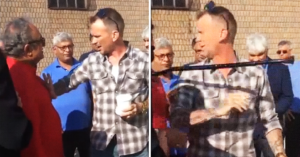 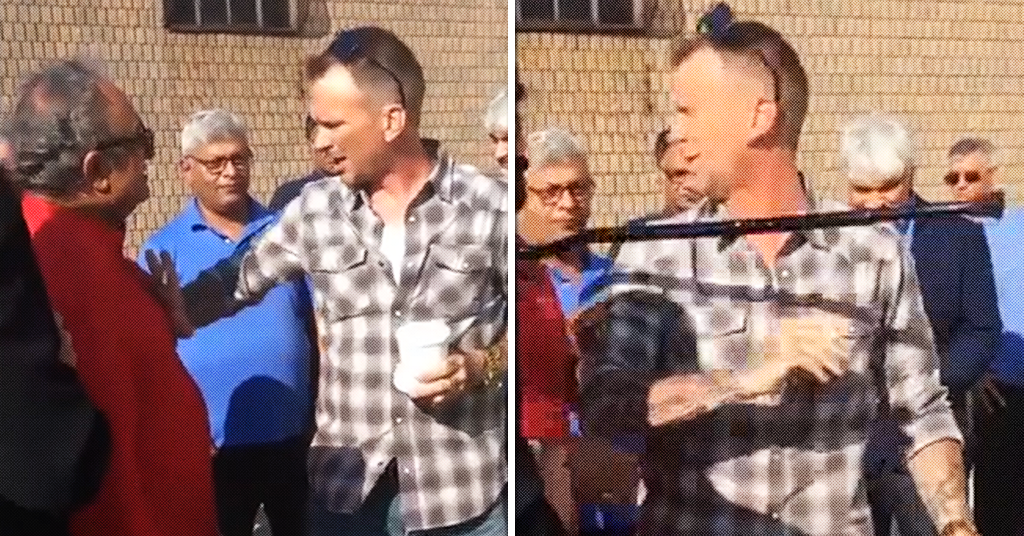 Top officials with the People’s Party of Canada struggled to contain the fallout after a Toronto Sun columnist whacked a far-right YouTuber over the head with a walking cane at Maxime Bernier’s recent “immigration rally” in Mississauga.

The video, first surfaced by Anti-Racist Canada, shows Harrison cursing at Fatah and shoving him in the chest, nearly knocking the 70-year-old columnist off his feet.

Seconds later, Fatah bats a coffee cup out of the far-right YouTuber’s hand with his walking cane, then whacks him in the head as People’s Party officials and a team of security guards scramble to restore order.

The Toronto Sun columnist told PressProgress he had been personally invited to the rally by party leader Maxime Bernier.

But when Fatah tried to enter the venue, men wearing “PPC Security” lanyards inexplicably denied him entry and bounced him from the lobby of the venue.

“I was told I had no ‘security clearance’ and could not enter,” Fatah said, recalling he was given no explanation why.

“No one I asked had an answer.”

Fatah, who said he’s lately been experiencing “mobility issues” relating to recent medical treatments, said PPC Security refused to let him sit inside and made him stand in the parking lot under the “sweltering sun.”

The People’s Party of Canada did not respond to a number of requests for comment from PressProgress about how it handled security at the event. 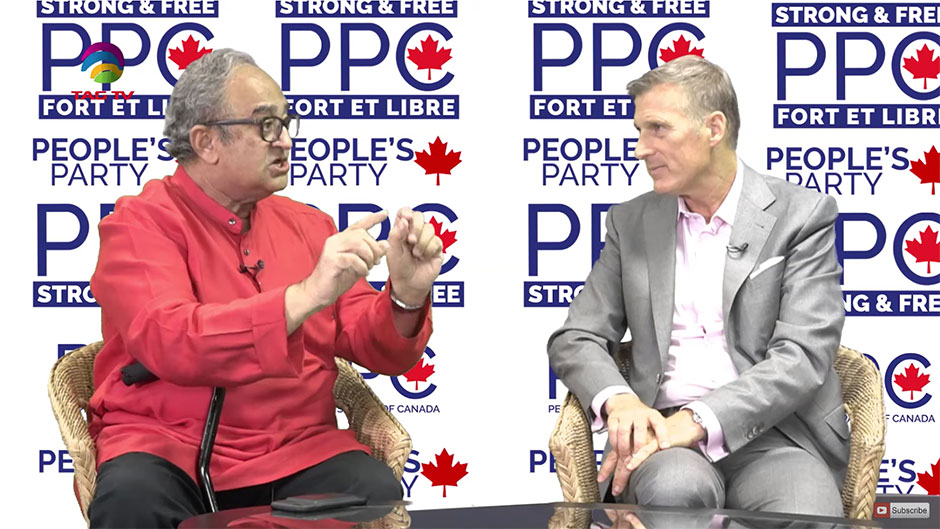 When he tried to explain himself to PPC officials, Fatah says Harrison interjected and “told me to f–k off to ‘the shit hole you came from’.”

Fatah says Harrison was one of 20 or more “white Christian anti-immigrants” and other “white nationalists” who were at the PPC event.

“They simply laughed at us, slapping each other’s hands in high-fives and the Alabama knee-slap,” Fatah told PressProgress.

In a series of videos uploaded to YouTube, Harrison argued that he was justified in shoving Fatah, whom he mocks as a “Pakistani penguin,” because he was allegedly struck by spit as the Toronto Sun columnist yelled at him.

Harrison appeared in one video with a tensor bandage wrapped around his face. 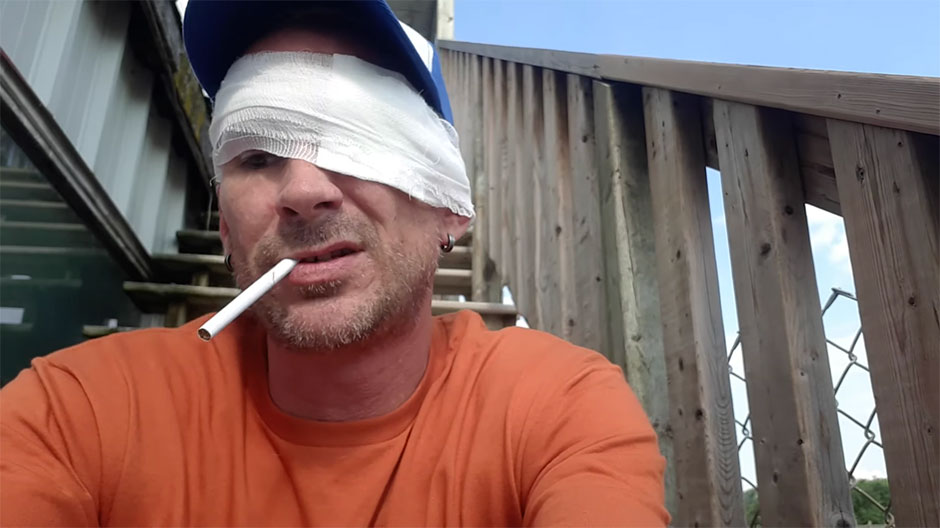 Fatah accuses Harrison of being a white supremacist, a claim Harrison rejects on his YouTube channel.

Yet the PPC supporter’s YouTube channel includes interviews with white nationalist Faith Goldy and videos promoting her failed campaign for mayor of Toronto. 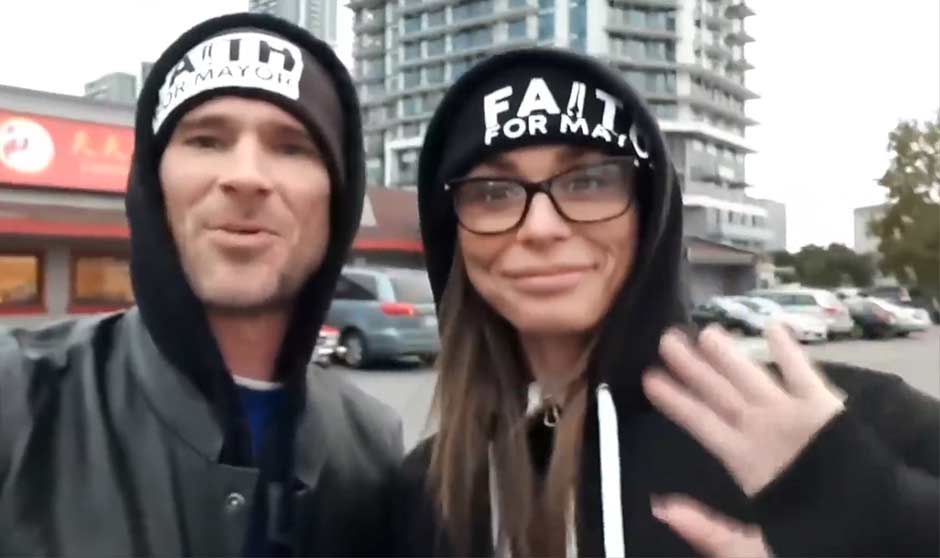 Although Fatah requested the party call police to make an arrest, the video shows top PPC officials tried to smooth over the incident instead.

Inside the venue, PPC National Coordinator Caleb Voskamp and another official are seen encouraging Harrison to bury the hatchet with Fatah.

One security guard, who also runs the PPC’s Don Valley North EDA, later suggests Fatah could “be the bigger person and let bygones be bygones.”

PPC officials did not respond to questions about their security team and protocols, including how a controversial YouTuber cleared security while a Toronto Sun columnist who was personally invited by the party’s leader was denied entry.

The PPC also did not clarify if the men wearing “PPC Security” lanyards were from a professional security firm or simply a group of amateur volunteers.

One PPC security guard has been identified as Darik Horn, someone previously associated with white nationalist Faith Goldy’s 2018 mayoral campaign and has been described as a “People’s Party super volunteer.”

Later in the video, a woman identified as PPC executive director Johanne Mennie is seen attempting to broker a peace deal with the far-right YouTuber.

“Okay, so here’s the deal,” the executive director is heard telling Harrison. “It’s my job to think about the party, right?”

“We want everyone in this room to support this cause,” Mennie continues. “I would like Tarek to be in this room. Along with you.”

Despite one of Bernier’s personal guests experiencing a violent altercation in the parking lot, Mennie welcomed the far-right YouTuber back into the event on the condition he keep his distance from Fatah.

Mennie, who is listed as the party’s contact for press inquiries, did not respond to a request for comment from PressProgress.

Fatah says that following the incident, he was targeted by white nationalists who sent anonymous messages to his employer.

“One of these white nationalists also called up the offices of the Toronto Sun and threatened legal action unless I was fired as a columnist.”

Fatah told PressProgress he now sees parallels between the white nationalists at the PPC rally and jihadist terror groups like ISIS.

“Both are primitive hate mongers who feed off each other’s shallow hatred.”