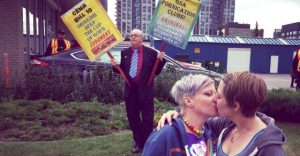 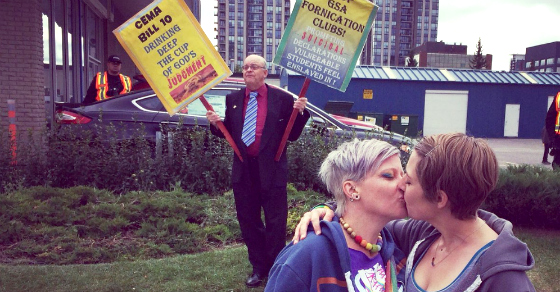 Two attendees at Sunday's Pride Parade in Calgary had a really good idea about how to ruin this homophobic politician's day.

Kenney, who continues to collect $170,400 annually from taxpayers for a job representing 111,225 Calgary residents, is going with the excuse that he was too busy looking for another job while still on the clock – namely, the leader of Alberta’s Progressive Conservatives.

But look who did manage to make it out to Pride? Perennial right-wing fringe candidate Larry Heather.

Although the staunch social conservative has run for various levels of office and lost on nearly 20 separate occasions, Heather recently made headlines across Canada labelling Alberta’s NDP government as “sex marxists.”

Heather claims recent moves to protect the rights of LGBTQ students will lead to a breakdown in “social cohesion” and, yes, even trigger the “breakup” of Alberta itself:

On Sunday, Heather showed up at Pride brandishing signs touching on familiar themes.

One sign described gay-straight alliances as “fornication clubs” while another claimed a bill aimed at protecting transgender students would cause all of us to drink from “the cup of God’s judgement.” (What happened to the cup of God’s eternal love and empathy?)

Thankfully, these two Pride attendees had a really good idea about how to ruin the hate-mongering politician’s day:

Heather, on the other hand, seemed to see things quite differently:

Organizers say Calgary Pride 2016 is estimated to have drawn a crowd larger than 60,000 people – the biggest crowd in the event’s 26 year history.