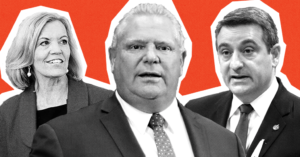 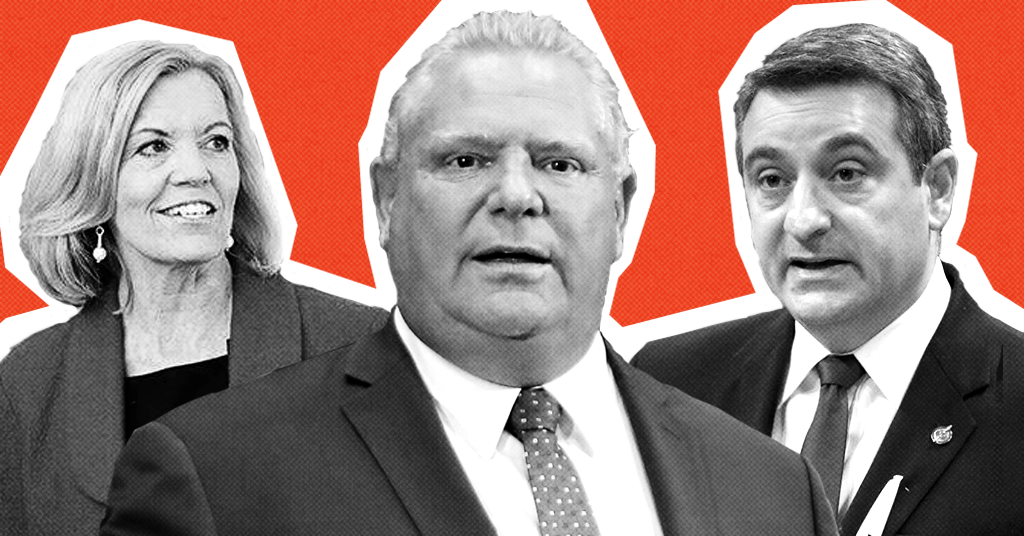 Will the Ontario PC caucus hold their out-of-control leader accountable or are they willing to go down with him?

Do Ontario’s Progressive Conservative MPPs believe in anything?

This week, Ontario’s Superior Court ruled Premier Doug Ford’s plan to gerrymander Toronto’s political boundaries in the middle of an election is undemocratic and unconstitutional.

So, Ford accused the courts of being undemocratic and threatened to invoke the notwithstanding clause to override the Constitution whenever he feels like it if courts keep striking down his laws as unconstitutional.

But don’t worry, Ontario – the Ontario PC caucus is full of strong, independent-minded MPPs who will surely stand up to a belligerent government ignoring the courts and using strong-arm tactics its to rig a democratic election, right?

Here are a few Ontario PC MPPs who claim they support the Constitution and the rule of law, but don’t seem to be doing anything to check their own government’s abuse of power:

Surely one man willing to stand up to Ford’s despotic instincts is Randy Hillier.

As the founder of the Ontario Landowners Association, Hillier used to erect billboards across the Ottawa Valley warning the government to “back off,” so if Ontario can count on anyone to stand up to a tyrannical government running roughshod over the rule of law – Randy Hillier is the man!

While Ford said the courts have no authority to strike down his government’s unconstitutional laws because he won a majority government, Hillier once sensibly stated “the rule of law guarantees freedom and protection to minorities from the tyranny of the majority.”

“We cannot let our guard down,” Hillier added. “We must forever be diligent.”

Hillier also led a push to declare a new holiday called “Constitution Day,”  noting that it represents “the only laws that restrain government” – presumably including Hillier’s own government.

Constitution Day: Take a look, I’ll be supporting this endeavour with a Private Members Bill on March 29 http://t.co/ubkA729h

Some see Health Minister Christine Elliott as more of a “moderate Red Tory” next to Ford and she does talk a good game about being “vigilant of those who stand against freedom, democracy and the rule of law,” but what’s any of that really worth if she just goes along with Ford every time he overrides the Constitution?

“Our rule of law depends upon the effectiveness of our justice system,” Elliott says.

Then there’s Infrastructure Minister Monte McNaughton, who once accused the government of failing “uphold the rule of law” when he sided with campers over an Indigenous group in a land claim dispute – so, surely McNaughton is equally concerned about a government trying to rig an election, right?

After all, McNaughton reminds us you can’t “pick and choose who is subject to the rule of law.”

The Pinery Provincial Park is still closed for camping. Today @OntarioParks cannot say when the park will be available to campers. This park should be opened immediately and the rule of law should be properly and fairly enforced. pic.twitter.com/DDqQ0VzP4i

And what about Paul Calandra?

When you think about a man of integrity standing up and holding government to account, who doesn’t think about Stephen Harper’s ex-parliamentary secretary?

Calandra has been very, very clear that the government has a “constitutional obligation” to “support the Constitution” and “make sure that we pass laws in accordance with the Constitution.”

Calandra even suggests this is a principle he would “fight for” because “that is what a government must do.”

Another person Ontarians can surely count on to defend their rights is Ontario PC caucus chair Daryl Kramp.

Kramp, a former Conservative MP who led the committee responsible for studying Stephen Harper’s Bill C-51, has long been a believer that “our legal people follow the rule of law” because that is “the manner that justice is carried out in Canada.”

No doubt Kramp is organizing his caucus to push back against Ford’s overreach, given that he often reminds us that Canadian women and men in uniform are defending “freedom, democracy and the rule of law.”

So Kramp’s going to speak out against Ford overriding the constitution to interfere with a municipal election too, right?