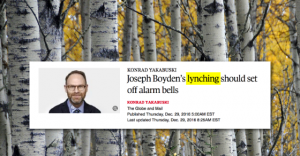 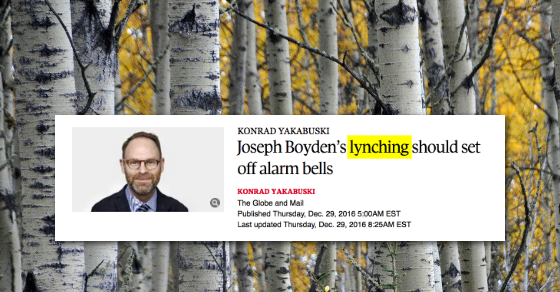 The Globe and Mail published a headline comparing the controversy surrounding author Joseph Boyden to a "lynching."

Nope, you didn’t wake up in an alternate reality – this is a real headline that ran in the Globe and Mail on December 29, 2016:

On the same day that a new poll reports two-thirds of Canadians agree Indigenous people in Canada face discrimination, the Globe and Mail decided to publish a column comparing the unfolding controversy surrounding well-known Canadian author Joseph Boyden’s Indigenous identity – sparked by an investigative report by award-winning investigative journalists at APTN, no less – to a “lynching.”

Globe columnist Konrad Yakabuski, who points out he once read Boyden’s The Orenda and found it personally fulfilling, claims Boyden is the victim of a “confederation of aggrieved minorities”:

“In the age of Idle No More and Black Lives Matter, grievance is the glue that keeps groups such as these together.”

And after worrying about what this “angry mob of identity politics” is doing to “Western democracies,” Yakabuski concludes:

“Mr. Boyden’s lynching should set off alarm bells in this regard.”

The Globe later edited the headline on the newspaper’s website, replacing “lynching” with “attacks,” although the online version of the column still concludes with Yakabuski comparing the author’s identity crisis to a “lynching.”

I reported it as a typo/spelling error. “This article uses lynching in a way that reveals that the author does not know what lynching is” pic.twitter.com/BFiwN7qipj

@RussDiabo @josephboyden LYNCHING?! if I’m Boyden I’m asking this guy to stop defending me. LYNCHING Don’t people die in those?

It’s weird to me that the @globeandmail is the only news outlet reporting that Joseph Boyden is dead https://t.co/96autl2tgc

@konradyakabuski Was a bunch of malcontents and you can tell us exactly why you’re right and we’re wrong? We’ve been waiting.

@JesseBrown and the fact that the @globeandmail used the term “lynching” to describe the call-out should also set off alarm bells.

Oh, right, they dont care what Indigenous people are saying about it, they just want to rail against their fave nemesis ‘identity politics’

So much vile in this & white people, being “lynched” is nothing like “being the subject of some rather contentious conversation at brunch.” https://t.co/CGdgiMCaLz

In 2017, can we resolve to make more judicious use of “lynched”? Unless there were weapons and a length of rope involved, pick another verb.

also @konradyakabuski why do you think your connection to the Orenda even matters in this discussion? #soundsmoniyawbutok

.@konradyakabuski, comparing Boyden’s indigeneity to Obama’s African-Americanness is ignorant of what racialized experience is. https://t.co/VOdMz9THUE

this piece in which @konradyakabuski decides barack obama wasn’t “experientially black” made me die inside https://t.co/rKN3btNZhx pic.twitter.com/v1dE5ec6YU

@EmmMacfarlane Agree. There’s an important discussion of identity to be had here. Casual belittling only generates anger.

Listen to what Indigenous people @MuskratMagazine @Hayden_King have to say about Boyden’s Indigeneity, not white men @konradyakabuski

There are lots of smart folks–Indigenous and non-Indigenous alike–who are also offering important, well-informed insights. Seek them out.

On the other hand, if Globe and Mail readers want to inform themselves with something a little more thoughtful and rational on the topic, here’s a column by Indigenous academic Hayden King: