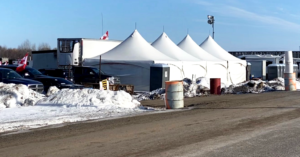 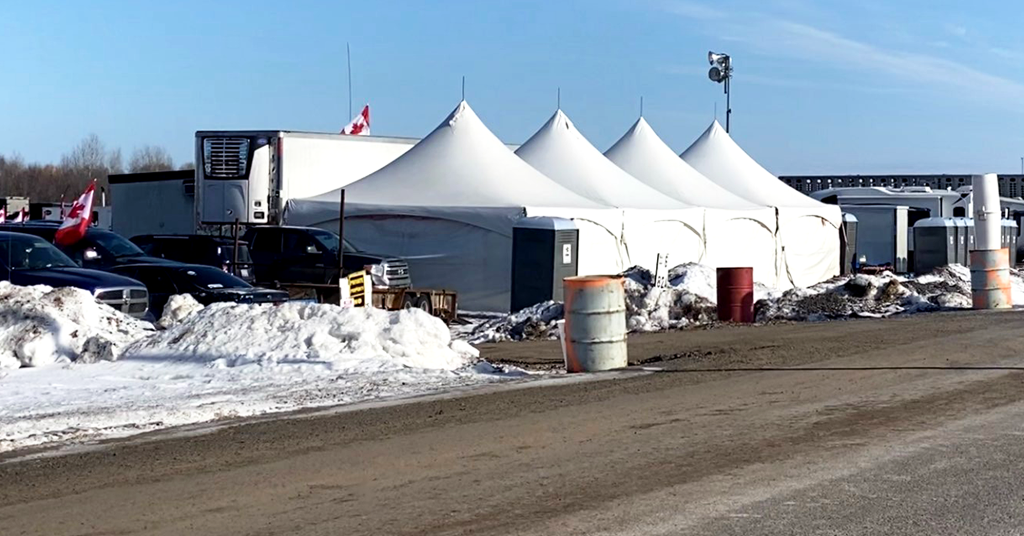 Russell Township, a community 30 minutes outside of downtown Ottawa, proudly calls itself the “third best place to live in Canada” – a high honour given its population is only 16,500 people.

But some residents feel the once tight-knit community is being permanently divided by the convoy of far-right extremists that has occupied Ottawa for three weeks.

Rachel, a resident of Russell Township, says the convoy has shown her a side of some of her neighbours that she finds unsettling.

“We used to be a really tight community,” Rachel told PressProgress. “It really kinda has raised this idea of ‘we’re a lot more different than we thought we were’.”

“I kinda look at my neighbours with a different view, like ‘which side are you on?’” Rachel said. “A lot of the friends I have around here were really excited about this convoy and others were quiet.”

“You can kinda tell based on who has suddenly become patriotic and put up a Canada flag.”

Another reason more flags are appearing on the backs of pick-up trucks in the area is the presence a convoy base camp just outside the town of Embrun.

The base camp is located on a farm field at the intersection of St. Guillame and Route 200, just five kilometres south of Highway 417 which connects Ottawa and Montreal. 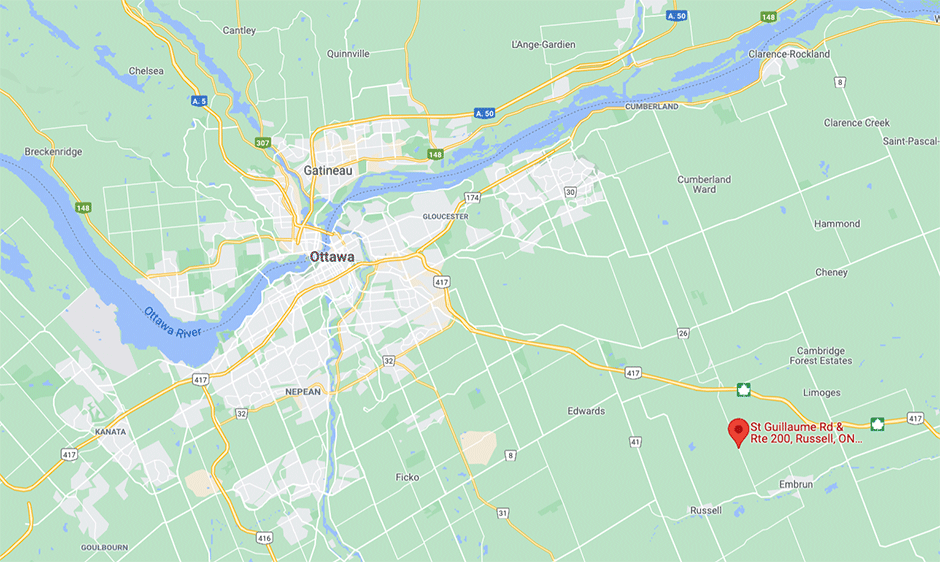 Local residents told PressProgress the farm is owned by Michel Dignard, a man described as apolitical, “mild mannered” and “always friendly” – at least, that is, before the pandemic.

Dignard’s farm features a mural on one of its silos that “illustrates the unity of all peoples.” It was funded with the support of the Government of Canada as part of a program that partners with Beau’s Brewery and St-Albert Cheese to bring art to rural Canada.

Asked by PressProgress if Michel Dignard is the owner of the farm field that is being used by the convoy as a base camp, Dignard’s farm immediately deleted its Facebook page. Dignard did not respond to additional emails requesting comment. 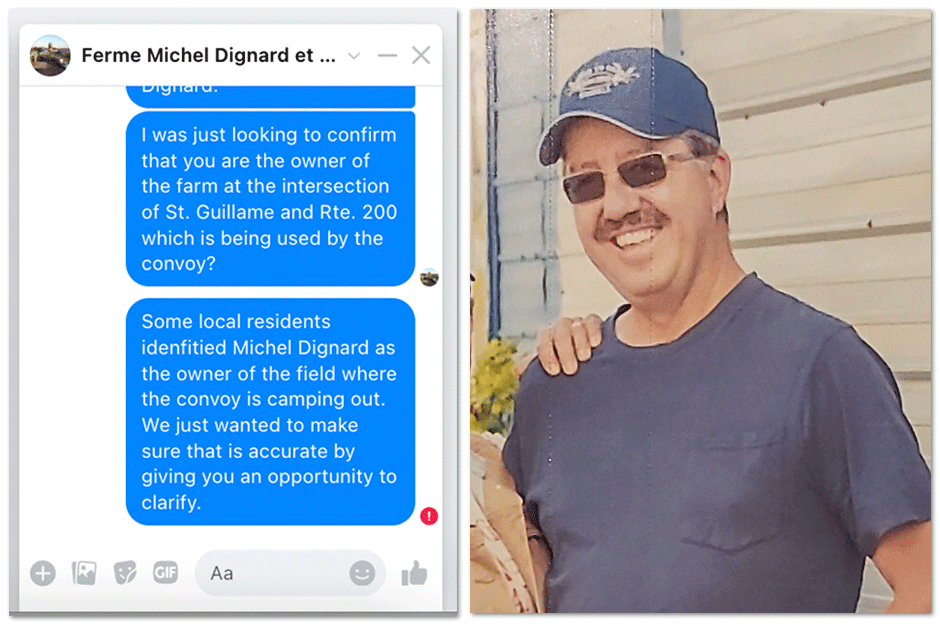 The camp at the farm, like the convoy’s logistics camp at Ottawa’s baseball stadium, consists of a series of tents, trailers, RVs and portapotties. The front gate is marked by oil drums and is guarded by black pick-up trucks with Canadian flags.

Over the weekend, around 50 vehicles were spotted parked at the farm during the day. Videos posted to social media suggest the number of vehicles camping out at the farm could swell to double that number at night.

Photos posted by convoy participants show the base camp’s tents are well-stocked with food and kept warm by patio heaters. 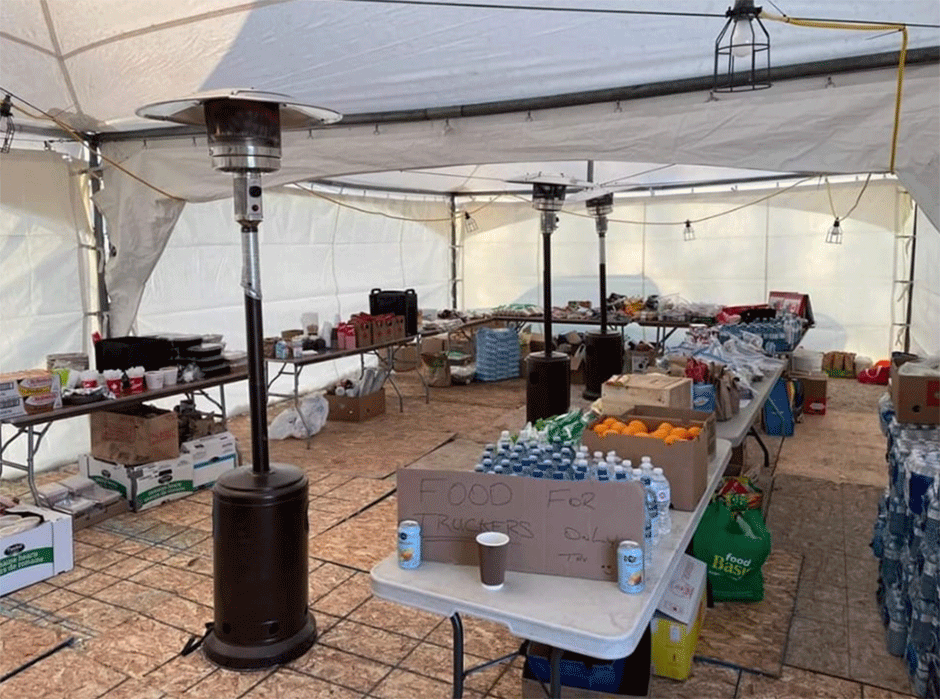 The Ontario Provincial Police confirmed to PressProgress they are aware of the base camp and have been in communication with organizers.

“We have regular contact with the main organizers or people that are there, continually giving them safe operation messaging and that kind of stuff,” OPP Sgt. Tyler Copeland told PressProgress.

“They are not causing us any issues at this point,” Copeland said. “There have been a few isolated incidents, people in the area maybe hurling comments towards them as they’re driving by, but it’s been pretty uneventful.”

Unlike vehicles occupying downtown Ottawa, Copeland said the OPP is limited in what it can do given the camp is located on “private property” – “that property owner is allowed to do, within reason, what they wish.” 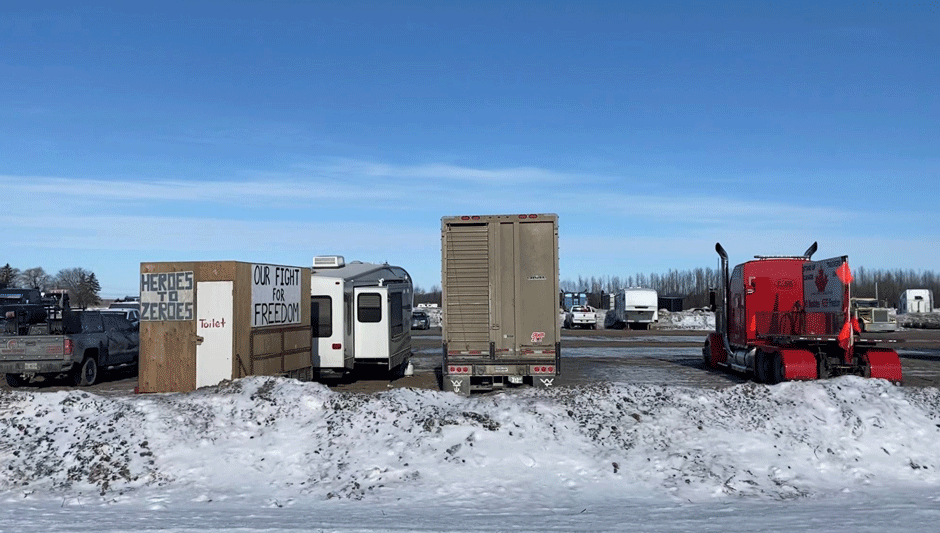 Local officials are guarded when asked about the base camp.

Russell Township’s Public Safety Department referred all questions to the municipality’s Communications Department, which, in turn, ignored several requests for comment from PressProgress about the base camp and set its phone number to a voicemail.

Pierre Leroux, Mayor of Russell Township, told PressProgress the OPP is monitoring the base camp and will take “appropriate action” if there are any threats to the “security of our citizens” – though he says he is not aware of any specific security threats related to the base camp.

However, other correspondences obtained by PressProgress shows the mayor told one resident that the OPP advised local officials it was taking a “measured” approach to the base camp.

“I know we would simply like them to disappear, but going in aggressively would actually be counterproductive in this situation,” Leroux wrote. “Based on OPP expertise, we are proceeding with measured steps.”

Some members of Russell Township’s Council have openly promoted the convoy’s occupation of Ottawa.

Councillor Cindy Saucier told PressProgress she is “pro-choice when it comes to vaccines” and emphasized that her postings in support of the convoy, which include sharing videos made by one of the convoy leader’s spouses, were posted on her “personal FB not my Township page.”

“I have had to delete people and the police have recommended I press charges which I have not done, so I prefer to leave it at that,” Councillor Saucier said. “The world has become very divided.”

Councillor Saucier did not address questions about her position on the base camp located outside of Embrun.

One Russell resident said many people in area are concerned that the base camp is there but they tend to keep quiet, probably because it is out-of-sight and nobody wants to “rock the boat.”

“Nobody openly speaks about it,” Jacqueline told PressProgress. “People don’t tell openly what they feel.”

“Seems a bit Canadian, or this part of Canada. Very conservative.” 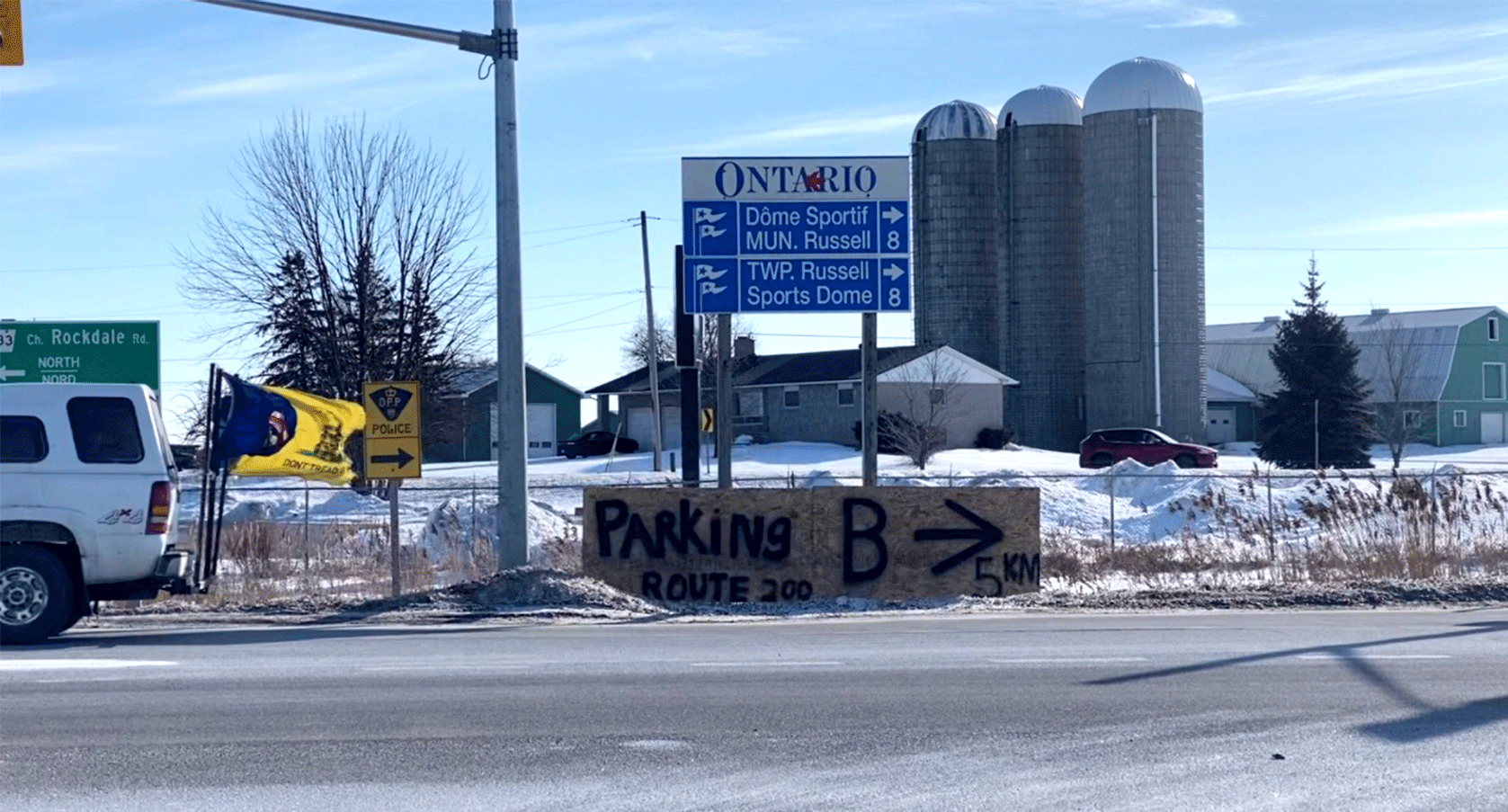 The divide between what people say out loud and what they keep to themselves is a recurring theme in Russell Township.

Marie, an administrator on a local Facebook group, says lately she’s been forced to shut down discussions on politics and “covid talk” because things have gotten “very divisive” in the community as many are becoming emboldened to share extreme views they previously kept to themselves.

“It is too volatile,” Marie told PressProgress. “People are attacking each other. I don’t wanna give it a platform.”

“It’s like you’re stuck in an episode of the Twilight Zone,” the former military medic explained. “The conspiracies are crazy and if you were to talk to me without me witnessing this, I would think that you were making this up.”

According to the Ottawa Citizen, a recent leak of financial data from GiveSendGo shows donors in rural areas around Ottawa have been among the biggest supporters of the convoy. 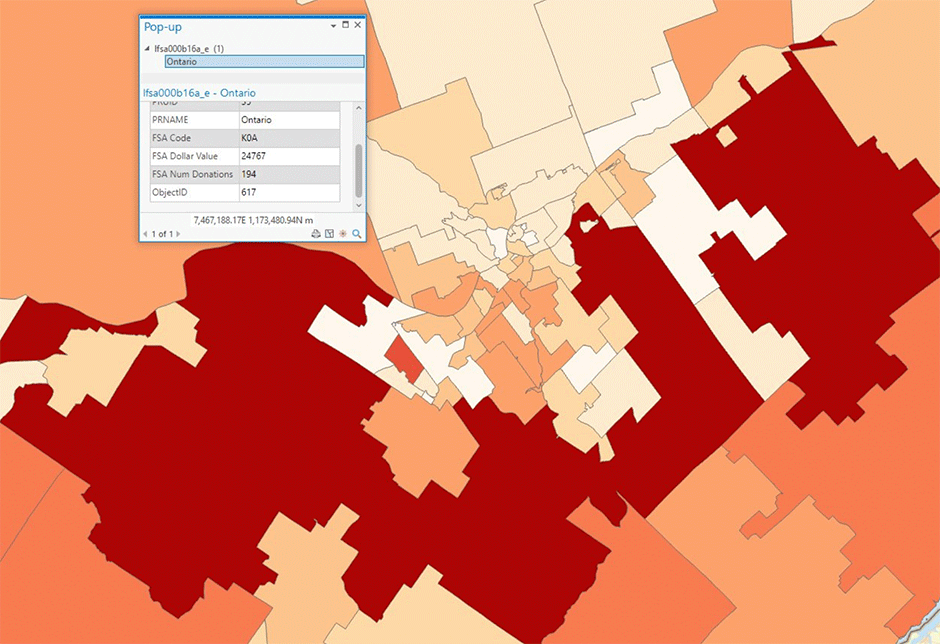 There may be a few reasons for that, especially given the area has been a focal point for activists associated with the convoy.

Lawn signs from “No More Lockdowns,” a group founded by Ontario MPP and convoy leader Randy Hillier, are a frequent sight in the area. Another convoy leader, Daniel Bulford, also lives in the region. Bulford is a former RCMP officer and runs a group that calls itself “Mounties for Freedom.”

Another factor, according to residents, is that a conspiratorial newspaper mysteriously started showing up in their mailboxes a little while after the beginning of the pandemic.

“Druthers” describes itself as “honest news.” The newspaper is partnered with an anti-vaxxer group called Vaccine Choice Canada and it regularly publishes conspiratorial content relating to vaccines and COVID-19 and showcases figures associated with the convoy. 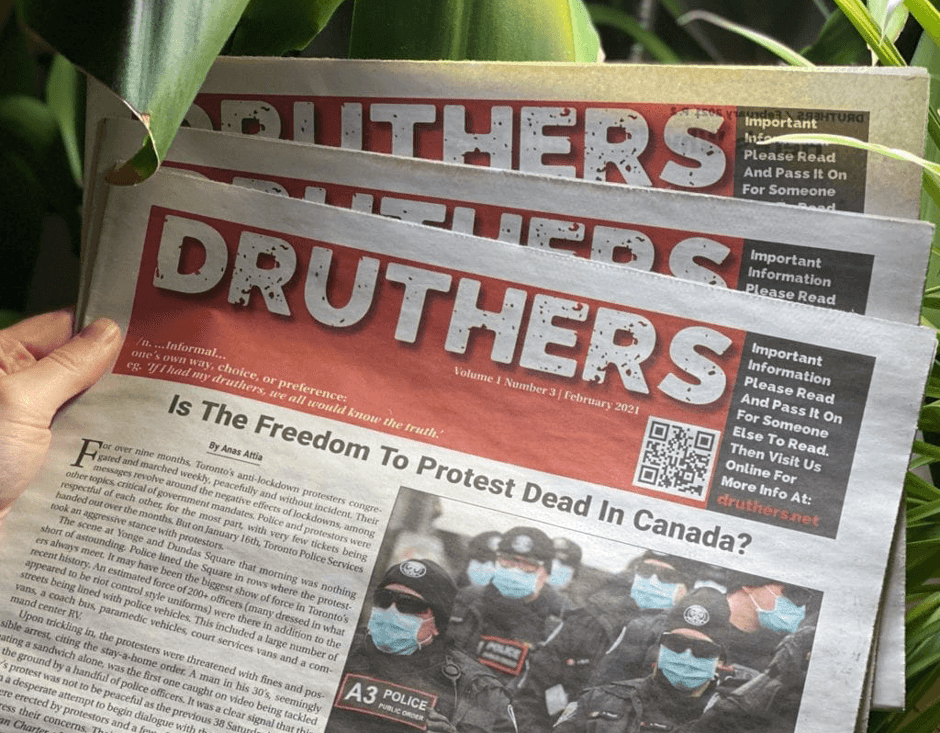 Over a dozen residents in Russell Township independently confirmed to PressProgress that they and their neighbours have been receiving Druthers in their mailboxes.

“For a long time I thought it was just me,” Rachel recalled. “Then I was chatting about it in December, there was a community event here … We were all standing around and I was talking about this thing that I got and this person said: ‘Oh no, we all get that’.”

Rachel said the conspiracy newspaper is even being handed out at local food markets.

“In Embrun, I went to this natural food place,” Rachel recalled. “On the way out, they were like, ‘have a copy of this great publication’ and it was Druthers.”

“Some of my neighbors have received some and they were quite upset,” recalled Marie, adding she does not know how it is ending up in her mailbox.

The cover story in the most recent edition of Druthers falsely claims that COVID-19 vaccines can cause harm to children. The edition also includes an op/ed written by Bulford’s Mounties for Freedom group.

Others say they appreciate Druthers because they feel their local newspaper and mainstream corporate media are shielding them from alternative information.

Meg, who lives in Russell, told PressProgress she has “no concerns” about Druthers because it provides “facts” that don’t appear in the “mainstream” media — though Meg would not elaborate on which “facts” she was referring to.

This week, following the federal government’s invocation of the Emergencies Act, Druthers issued a statement indicating its bank accounts have been frozen.

“With our bank account being frozen, our funds are no longer accessible,” Druthers wrote. “This leaves us in a bit of a pickle.” 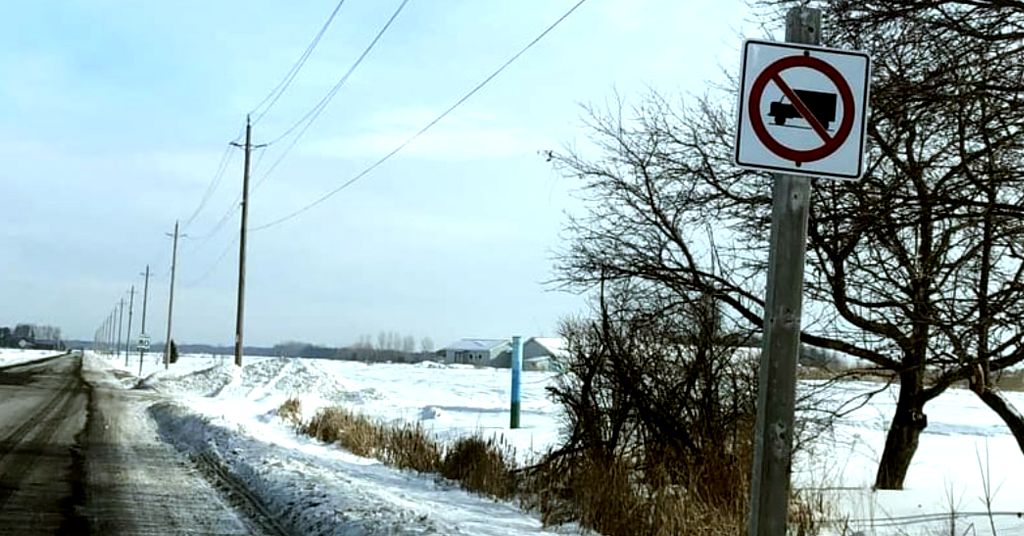 While the emergency in Ottawa may eventually de-escalate in the near-term, residents in Russell Township say its long-term impact on their community is what they’re “afraid of the most.”

“I think that this is going to cause a lot of irreparable damage to people’s relationships with each other,” Marie said.

“I think our democracy is at a serious risk.”