Toronto’s City Manager is warning some families could find themselves without a home as a result of the Ford government’s proposed cuts to a program aimed at supporting low-income families with young children.

Buried in the slow trickle-out of Ontario’s post-budget cuts is a proposal to eliminate the Transition Child Benefit, a program providing “basic necessities” to support low-income children, particularly those with parents who recently lost their job or the children of refugee claimants.

According to a letter to Toronto’s mayor and council members dated May 9, City Manager Chris Murray warned Ford’s proposal to eliminate the TCB risks straining the city’s family shelter system, as current recipients may be “unable to secure or maintain their housing.”

He noted the cut would primarily impact “residents who may have recently lost their job” and “refugee claimants who have been in Canada for less than 18 months.” 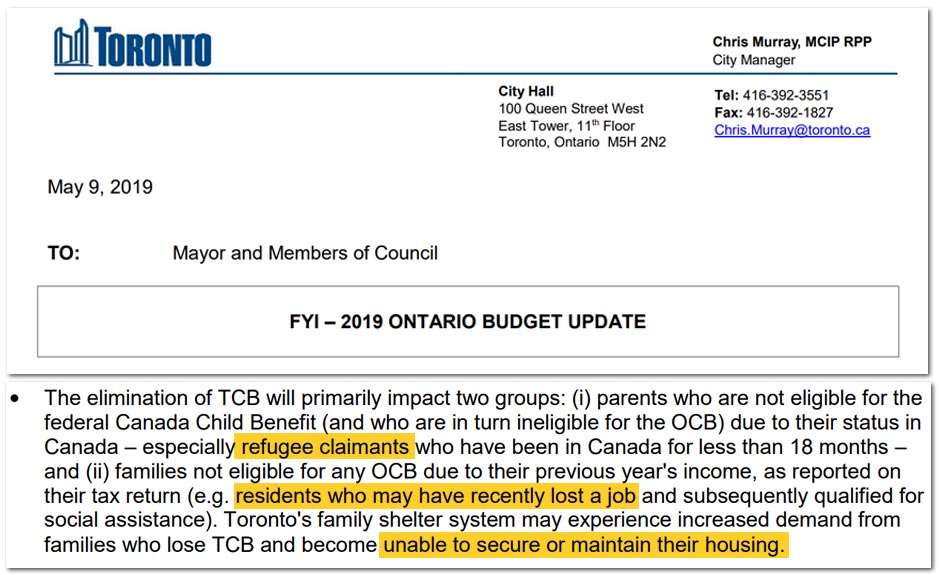 The benefit provides up to $230 per month, per eligible child (under 17) to parents on social assistance — who aren’t receiving the full Ontario Child Benefit  — to cover food, clothing and other “basic necessities.”

Doug Ball, executive director of the Ontario Municipal Social Services Association, whose membership helps deliver income support, confirmed the Ministry of Children, Community and Social Services notified some of its members about the proposed elimination of the TCB.

“We are aware of this change through our member municipalities who received notice from the Ministry,” Ball told PressProgress.

“Cutting funding to support vulnerable children like the TCB without any plan to ensure children are not made more vulnerable is irresponsible,” Elman said.

The cut of the Transition Child Benefit to those not receiving OCB yet another blow to those children most vulnerable. To make these moves without regard to their effect on people is unforgivable. pic.twitter.com/Osj8wSBJbw

As reported previously, Toronto’s shelter system is already overflowing, owing to years of under-funding and neglect.

The Ford government’s recent budget is already cutting a billion dollars from the Ministry of Children, Community and Social Services — including half a billion dollars to support low-income workers and people with disabilities.

The office of Children, Community and Social Services Minister Lisa MacLeod did not respond to a request for comment from PressProgress.