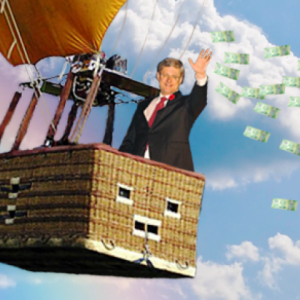 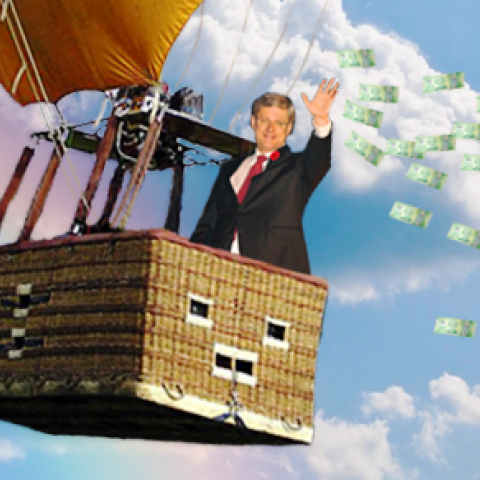 Stephen Harper will blow $43 billion this year on tax giveaways

The Conservative anti-tax brigade is spending $43 billion on tax giveaways this year, a new report estimates. A Parliamentary Budget Office report released Tuesday examined changes to Canada’s tax system between 2005 and 2013 for personal incomes taxes and the GST/HST. It found that the accumulation of cuts since 2005 will reduce federal personal income […]

The Conservative anti-tax brigade is spending $43 billion on tax giveaways this year, a new report estimates.

A Parliamentary Budget Office report released Tuesday examined changes to Canada’s tax system between 2005 and 2013 for personal incomes taxes and the GST/HST. It found that the accumulation of cuts since 2005 will reduce federal personal income tax revenues this year by an estimated $17.1 billion and the federal share of the GST/HST revenue by $13.3 billion.

To put this in perspective, “the cumulative fiscal impact of government-wide” program cuts since 2009-10 is projected to be $12.5 billion this year, the PBO report states.

(The PBO does not include information on revenue losses attributed to corporate tax cuts in its latest report because of “data limitations”; measuring their impact in the same way they did for personal income tax and GST changes requires access to micro corporate tax data, which they did not have access to.)

To put the findings another way, the Harper government, by starving the public coffers, is losing $43 billion that could be used to boost investments in axed services, build needed national programs, as well as balance the budget and pay down debt.

And there would even be enough left over to give every little boy and girl their own pony!

Not getting much in return for those tax cuts…

Despite Conservative claims that tax cuts spur job creation and put money back into the pockets of consumers, there’s very little supporting evidence to back up this claim.

And the PBO’s report indicates that median income taxpayers with kids (averaging between $42,450 and $56,505) would see between 2.8% to 2.9% increase in their after-tax income. But those tax savings can be quickly eaten up by increased costs that would otherwise be covered through public programs.

For example, tax credits for children cost Canadians $2.74 billion. But a month or two of childcare in Ontario is equal to the total after-tax savings from these tax credits, while an affordable national childcare program would cost less to implement — and saves families thousands of dollars.

Here’s a list* showing what else we could do with $43 billion in this lost revenue:

Buy every Canadian kid under the age of 9 a Welsh pony:

Not only does that help build a stronger and healthier society, it creates jobs and puts money back in people’s pockets.

*Numbers based in part on 2015 estimates from CCPA’s Alternative Federal Budget (except the pony part).