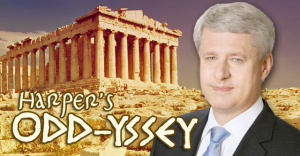 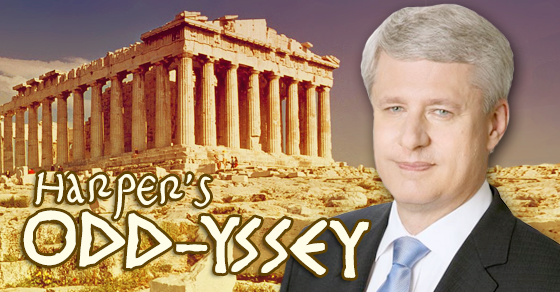 By the beard of Zeus, what on earth is Stephen Harper talking about?

By the beard of Zeus, what is Stephen Harper talking about?

In a “confidential” letter to his caucus provided to the media on Monday, Prime Minister Harper instructs Conservative MPs to work “to promote the enhanced [Universal Childcare Benefit], and in making sure it will never be taken away from the families who deserve it.”

But there’s one line about Greece that may leave economists scratching their heads:

Leaving aside how Greece’s financial troubles were not triggered by taking away a $60 per month per child (before tax) subsidy increase — is Harper seriously suggesting that axing his so-called family tax plan would pave the way to the collapse of the Canadian economy?

Mass unemployment? Protesters in the streets? Line-ups at ATMs? Is Harper serious?

Harper’s baby bonus hardly covers average child care costs as is and does nothing to create new child care spaces. And except for very wealthy families, 9 in 10 households will see no benefit from Harper’s income splitting scheme.

Is Harper seriously suggesting Canada’s economy is so fragile under his leadership that $60/month and a tax break hardly anyone qualifies for is all that stands between order and chaos?

There is no plausible scenario where axing these measures sends the Canadian economy spiralling into chaos.

But maybe most staggering of all: Harper says he wants to avoid a “cycle of spiralling deficits.” By his own logic, what does spending $26.755 billion on these measures at the same time as the recession appears to be pushing Canada back into deficit do to accomplish that?

Of course, running deficits during recessions can actually help stimulate the economy (Harper did that — he even said “deficits are essential” during a recession). Heck, Harper’s run seven deficits in a row.

Now he wants you to believe doing what he’s done seven times will trigger a Greek-style economic collapse?