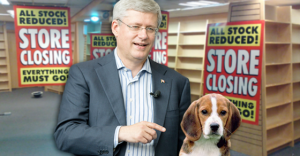 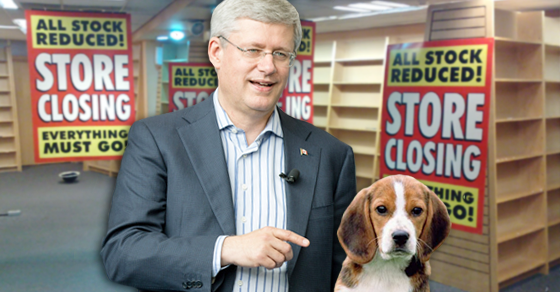 When did Stephen Harper stop believing in responsibility?

When did Stephen Harper stop believing in responsibility?

Just Wednesday, the Bank of Canada joined private sector economists in acknowledging the Canadian economy is likely in recession for the second time in six years (and creating another $4 billion hole to fill in Harper’s so-called balanced budget).

While crashing oil prices have thrown a wrench in the Canadian economy, the United States, Canada’s biggest trading partner, is currently shows signs that its economy is strengthening.

Yet Prime Minister Harper has blamed Canada’s weakening economy on “the downturn in the global economy” and otherly “forces beyond our borders,” as if he were powerless to do, well, anything. Finance Minister Joe Oliver, who still won’t acknowledge Canada is in recession and attributes his mess purely to “external factors.”

Notice a pattern here? While Canadians are used to hearing how every job created since the “depths of the recession” are personally the result of Stephen Harper’s leadership, but what about the bad news?

That always seems to be someone else’s fault. Back in 2008, when Canada’s economy stood at the edge of a recession Harper predicted would never happen, Conservative MP Deepak Oprai took credit for preventing a recession, even though they’d previously ruled out going into deficit with new stimulus spending (even though they hadn’t actually done anything):

“We are not in a recession here because the government rose to the occasion with the finance minister when it was required.”

But a short time later, the story changed — Harper and late Finance Minister Jim Flaherty acknowledged Canada was headed for a “technical recession” and conceded these were “classic circumstances under which budgetary deficits are essential.”

Instead of owning their flip flop, the Conservatives blamed the “global recession” for everything bad. Here’s what Flaherty said later in 2009:

“Mr. Speaker, we are in the midst of a severe global recession and Canada is doing better than most countries. However, Canada is significantly affected by this recession. It is important that we get the money out there working for Canadians.”

Ever since then, the “global recession” has become a useful scapegoat for Conservatives whenever they fail to live up to their own hype as economic managers.

Running a deficit for seven years in a row? Blame the global recession:

“More than five years after the global recession, the Government’s track record of sound fiscal management has paid off for Canadians, resulting in budgetary surpluses starting this year.”

“Every member in the House has probably suffered job losses in their communities due to the global recession.”

“Really, the global recession in 2008 shows why nations have been struggling, particularly in the manufacturing sector.”

Yet paradoxically, at the same time as the Conservatives said Canada was struggling and suffering due to the “global recession,” they simultaneously took credit for taking “action.” Here is how Harper described the Economic Action Plan during debate on the 2010 Speech from the Throne:

“Action, well intended, well informed and well executed, has made a big difference.”