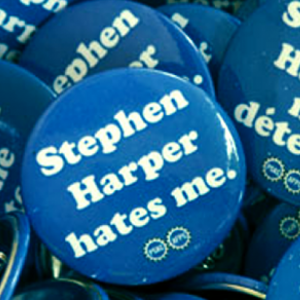 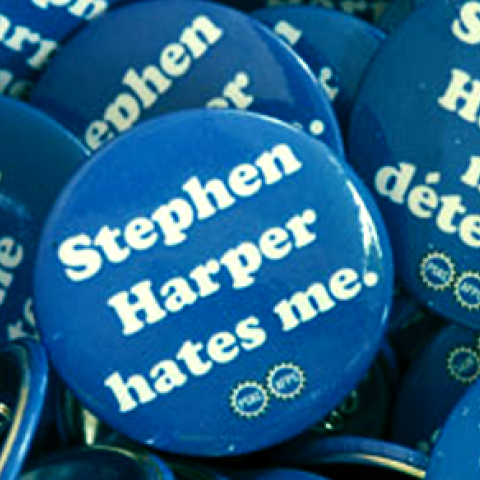 Looks like it’s time for unions to put back on their “Stephen Harper hates me” buttons. On Tuesday, the anti-labour Bill C-525, designed to make it harder for unions to organize and represent workers, was passed by the Senate — despite containing obvious errors.   The bill was rushed through after recent back-to-back hearings at a Senate committee. […]

Looks like it’s time for unions to put back on their “Stephen Harper hates me” buttons.

On Tuesday, the anti-labour Bill C-525, designed to make it harder for unions to organize and represent workers, was passed by the Senate — despite containing obvious errors.

The bill was rushed through after recent back-to-back hearings at a Senate committee.

Some of the bill’s most draconian measures around certification and decertification were removed, but the new law still has dangerous implications for labour in Canada. Under the guise of enshrining “secret ballots,” critics say the real purpose of Bill C-525 (Employees’ Voting Rights Act) is to make it harder for workers to organize, adding hurdles to certification. We guess Conservatives haven’t heard that unions are a “key driver in the creation of the middle class.”

We present four reasons to be concerned with the passage of Bill C-525:

“Bill C-525 would change the rules that apply when workers decide whether or not to have a union in their workplace,” PSAC explains. “Under the current laws, if a majority of employees sign union cards their union can be certified. The Bill would impose a forced vote even when a majority has clearly shown they want a union.”

The bill means a vote will need to be held for every application – even if a vast majority of workers have signed a card saying they want to be represented by the union in question. “My fearless prediction is that we’re going to see long delays because there is no provision in this bill for increased resources for the (Canada Industrial Relations Board), nor can there be such provision because this is a private member’s bill,” says Senator Joan Fraser, who pointedly critiqued the bill in October. PSAC echoes those sentiments: “Insisting that votes be held in all cases will quintuple the Board’s workload requiring more staff and financial resources; all this at a time when budgets are frozen. The more votes, the longer it will take for workers to have their unions certified, the more time the employer will have to interfere.”

Fraser sums up the dangers here nicely. “It’s helpful to look at the record in jurisdictions that already have this mandatory secret ballot system. That includes several Canadian provinces, as well as various jurisdictions in the United States. Study after study shows two effects. One is that there are fewer applications for certification; another is that the success rate of those applications that are made diminishes.”

4. No Set Deadline for Secret Ballots:

No deadline is set for holding such secret ballot votes, as Fraser points out: “That is very dangerous, because it does allow time for intimidation to occur between the initial drive to have the cards signed and the time the ballot is actually held.”

Of course, this a private member’s bill in name only. Few such bills make it this far. This bill – not to mention its even more egregious original incarnation and the equally dangerous Bill C-377 – has the full support of the government.

None of which comes as a surprise.

In a fundraising call to arms last week, Conservative director of communications Cory Hann cited the threat of unions in his call for donations, suggesting that they want to “influence our elections from the outside, unaccountably spending all kinds of money to hurt us — without ever running for office.”

It’s much harder for unions to go to war if they can’t form in the first place. How convenient.