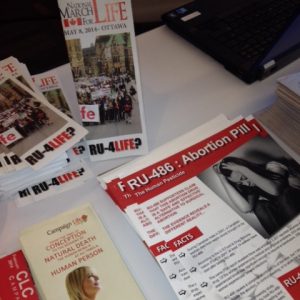 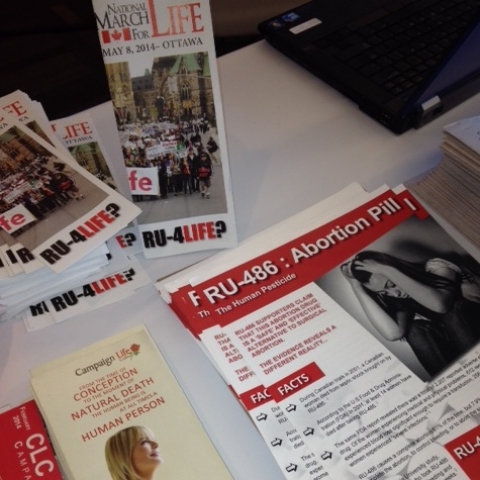 Social conservatives are well-represented at the Manning Networking Conference, a two-day gabfest tostrategize about “next steps” for the conservative movement. Check out these booths: After getting a receptive audience at the Conservative Party convention in Calgary in October, the group weneedalaw.ca brought their show to the Ottawa event. Here’s their pitch for a law to restrict abortion: “Canada is […]

Social conservatives are well-represented at the Manning Networking Conference, a two-day gabfest tostrategize about “next steps” for the conservative movement. Check out these booths:

After getting a receptive audience at the Conservative Party convention in Calgary in October, the group weneedalaw.ca brought their show to the Ottawa event.

Here’s their pitch for a law to restrict abortion:

“Canada is the only nation in the Western world without an abortion law. Along with North Korea, Canada provides no legal protection for pre-born humans and it’s time to address this appalling fact. It’s ironic that our leaders repeatedly, and rightly so, call out North Korea for their human rights violations, and yet Canada, along with them, is one of only two countries in the world without any legal protection for children in the womb.”

Put more succinctly, the group’s “quest” is to “restrict abortion to the greatest extent possible.”

Campaign Life’s big issue right now is to try to block RU-486 from getting approved in Canada.

Calling it the “human pesticide,” the drug (also known as mifepristone) has been used by millions of women in 57 countries since 1988, when it was first approved in France. It was subsequently approved the United States, throughout Western Europe, Australia and New Zealand.

Health Canada usually takes about nine months to review an application for a pharmaceutical, but this one is dragging on; the department has been reviewing it since December 2012.

Unlike the morning after pill, which can be used within a few days of having sex to prevent pregnancy, RU-486 would be available by prescription to terminate pregnancies of up to nine weeks.

Pro-choice advocates say access to mifepristone doesn’t increase the rate of abortion in a country, but reduces the number of surgical terminations. Campaign Life has a different take.

Focus on the Family, a Christian group guided by the principles of the “pre-eminence of evangelism, the permanence of marriage, the value of children, the sanctity of human life, the importance of social responsibility, and the value of male and female,” has a more subtle pitch than Campaign Life.

There are no pictures of distraught pregnant women or stark language about a “human pesticide.” Instead, it’s all aboutIrreplaceable, a three-hour co-production by Focus on the Family, NCM Fathom Events and Pine Creek Entertainment.

It’s hitting select cinemas for a one-night event in May, and here’s the soft sell:

Join host the executive director of Focus on the Family New Zealand “as he seeks to find out whether the adage, ‘If family fails, society fails is true.'”

Spoiler alert: We think Jason Kenney will like this movie.

The Institute of Marriage and Family Canada, the research arm of Focus on the Family, advances ideas to make sure “marriage and family-friendly policy are foremost in the minds of Canada’s decision makers.”

“Family is the foundation of our society. We explore the causes and consequences of family breakdown and of family strength. We want to help Canadian leaders better understand the impact their policies are having on families. After all, what is good for families is also good for our nation,” so goes the pitch.

Another spoiler alert: This is code for the traditional family. You know what that looks like: a breadwinning dad and a stay-at-home mom.