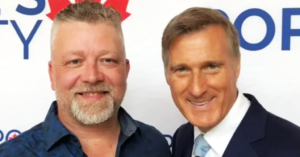 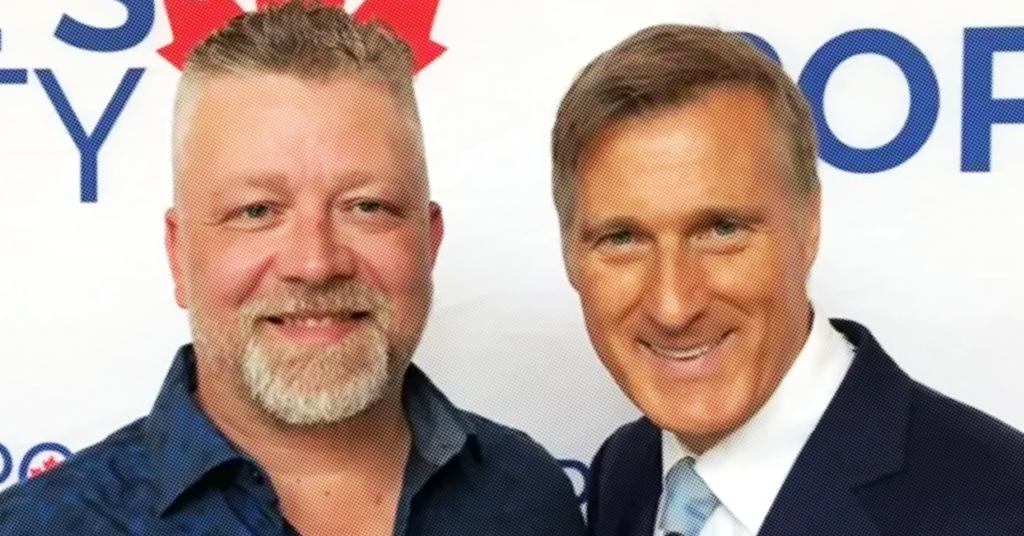 The organizer of a “Christmas Freedom Rally” in Saskatoon this weekend might be interested in spreading a little more than just holiday cheer.

Christmas Freedom Rally organizer Mark Friesen has billed the event as a protest against public health authorities “shutting down Christmas and shops and small businesses that depend on it.”

One thing local media hasn’t mentioned is that Friesen, a former 2019 People’s Party candidate, is linked to a number of far-right groups. Last summer, Friesen was a key organizer of an anti-lockdown Canada Day rally in Ottawa attended by anti-vaccine activists, QAnon conspiracy theorists and far-right fringe groups. 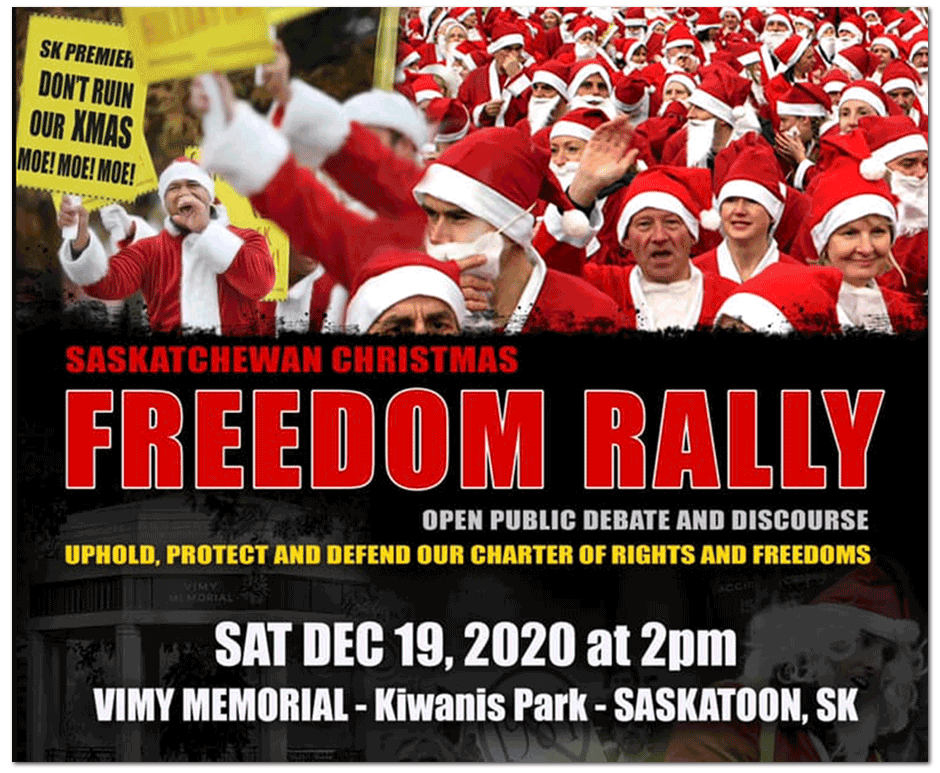 “Mark Friesen first came to our attention when he was involved with the United We Roll Convoy, which was essentially a Yellow Vests Convoy,” Elizabeth Simons, Deputy Director of the Anti-Hate Network told PressProgress.

“The extremism and racism found in the anti-lockdown scene is a feature, not a bug.”

The same elements have been present at Saskatchewan’s recent rallies organized by Friesen. About two hundred unmasked people attended the last Freedom Rally, which came under widespread criticism for breaking public health restrictions and racist comments made by a rally speaker.

“I can never get these foreigners’ names right,” YouTuber Ruddi Bruce said after mispronouncing the name of Dr. Saqib Shahab, the province’s chief medical health officer.

Overheard at a “freedom rally” in Regina… a day in the life of a journalist in 2020 I guess?‍♂️ pic.twitter.com/4sw9jOsGuS

“While we don’t agree with what this gentleman said, or how he said it, and the swearing — I mean, it made me cringe, I didn’t like it at all — it still is freedom of speech,” he told the Leader-Post. “People need a platform.”

“He’s engaged in racist rhetoric online, such as sharing a cartoon of NDP leader Jagmeet Singh in a hateful manner. He has collaborated with anti-Muslim activist Tom Quiggin to produce hateful content. He has consistently spread conspiracy theories about the UN. He has shared content from white supremacist Lauren Southern, praised Tommy Robinson, and boosted Stefan Molyneux.”

“Friesen was also part of the explicitly antisemitic vlogging collective Plaid Army,” Simons pointed out. “He left PA due to their extreme views, but did so quietly, and did not publicly condemn them. He still allows them to be shared on his Forum for Canadian Sovereignty Facebook group.”

“There is no shortage of information about Friesen. The media has been quite favourable to Friesen, in light of his connections and behaviours.”

Asked if he disputes being characterized as a racist conspiracy theorist, Friesen told  PressProgress “it’s BS of course.” Friesen declined to explain why,  but then tweeted to his followers that he would soon be the victim of a “hit piece from PressProgress.” 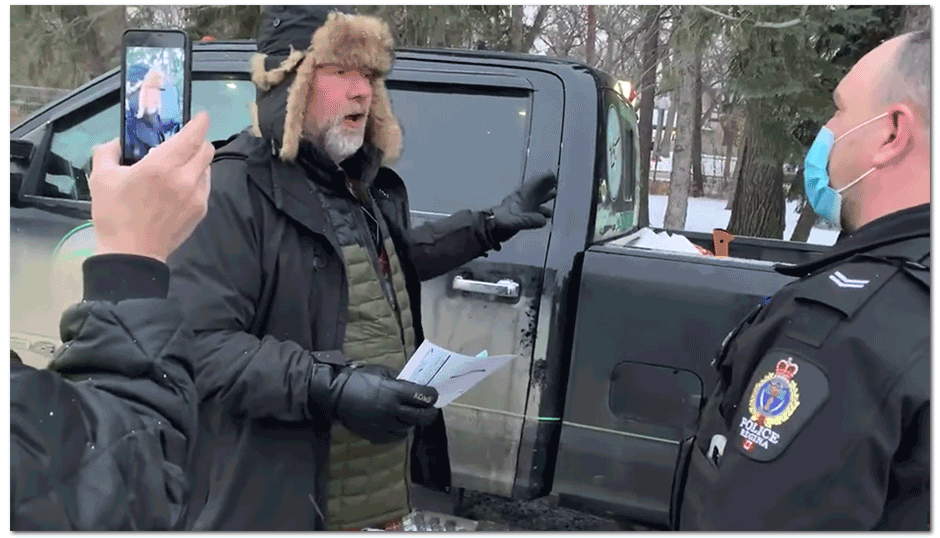 In a recent YouTube video, Friesen argued the pandemic was planned as a means to “destroy western civilization and the industrialized world.”  He has also used the Saskatchewan Freedom Rallies to promote a conspiracy theory called “The Great Reset.”

“The Great Reset is a conspiracy theory based on the idea that a group of elites have designed and manipulated the pandemic — which believers of the theory claim to be fake — for nefarious means,” Simons explained. “It is essentially a rebrand of the anti-”Globalist,” anti-New World Order, anti-UN conspiracy theories that we have already seen for years within fringe right-wing circles.”

“It comes from a meeting held by the World Economic Forum, where politicians and business leaders discussed economic recovery post-pandemic. The theory took hold due to Trudeau’s statements to the UN surrounding the pandemic and the opportunity for a “reset.” It has roots that aren’t dissimilar to QAnon, and crossover in believers.”

Conspiracy theorists of all stripes have been behind so-called anti-mask and anti-lockdown rallies across the country since the pandemic began. These groups have also organized Christmas protests across Canada.

“We have to strike the balance between shining a light on the problematic and hateful elements of the anti-lockdown movement and understanding that this is serving to radicalize people who are there to voice legitimate concerns,” Simons said.

Individuals can fall down conspiracy theory rabbit holes during traumatic events, such as losing their jobs, families and friends during a pandemic, she added.

While police enforcement and tickets can deter people from attending large rallies, they cannot stop a conspiracy theory – and in some cases may reinforce them.

“The issue is that a number of them want tickets so they can fight together in court, believing it will prove their theories. Ticketing and police enforcement could very well have the opposite effect and further drive them to be entrenched in their views.”

Friesen says he received a $2,800 ticket at the last rally. He has since set up a GoFundMe to fight the fine in court.

“We need to have frank discussions about what these theories do to people,” Simons said. “It isn’t helpful to mock them. There needs to be discussion at the school level for kids about media literacy, and we need to put efforts into education and resources for adults to deradicalize.”