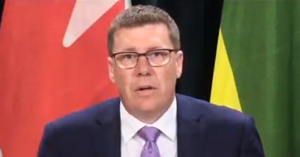 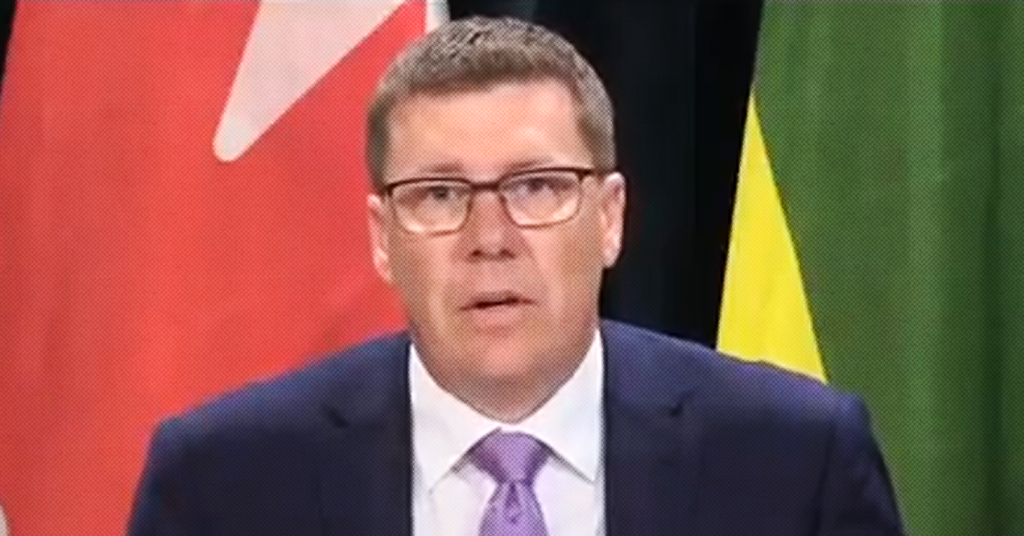 Saskatchewan Premier Scott Moe is having trouble talking about racism these days.

This week, hours before anti-racist demonstrators gathered in Regina, the Premier took to Twitter to share a photo of graffiti that stated “Justice for Floyd #BLM” and remind protesters that “vandalism is not acceptable.”

Moe strongly implied a link between the graffiti and the demonstration, although he provided no evidence to back it up. He concluded by asking the public to call the police if they had any information on who was behind the graffiti.

If anyone has any information about who did this, please contact @reginapolice.

After facing criticism for trying to delegitimize a peaceful protest against racism by focusing on an isolated case of graffiti,  Moe took another kick at the can tweeting a video of himself reading a prepared statement agreeing “racism remains a problem in our society and we should take every opportunity to speak out against it.”

Moe would only describe the anti-racist demonstration in Regina as unspecific “events that occurred today outside of this Legislative Assembly” that were “in response to other recent events throughout North America.”

Then, Moe again returned to the issue of graffiti, stressing that anti-racist demonstrators can only “speak out” if it is done “peacefully and safely.”

Racism remains a problem in our society and we should take every opportunity to speak out against it – peacefully and safely. pic.twitter.com/OtpTNxyHYi

Libin Salad, who co-organized Tuesday’s rally, said she was “quite disappointed” by Moe’s statement, which she said attempted to delegitimize the anti-racist demonstration.

“He’s using the word ‘vandalism’ but we all know that the majority of people will read that and immediately go, ‘That’s looting, these protests or these rallies are only here for violence’,” Salad said.

Salad said Moe failed to address the organizers’ calls to action, including addressing systemic racism in Saskatchewan’s schools and workplaces.

“We called on our leaders across this country to publicly speak out and put their money where their mouth is,” Salad said. “Essentially, commit themselves to an action that will better the community.”

Moe has a long history of fumbling responses to racism in Saskatchewan.

Moe also faced criticism last summer after he tweeted a photo of a car with a confederate flag on its roof to promote a local charity event — to date, over a year after the confederate flag was brought to Moe’s attention, the photo remains on his Twitter feed.

Recently a charity car auction has been added: in 2018 the Lightning McQueen benefitted @STARSambulance & on 7/27 the General Lee will benefit @CMHA_SK pic.twitter.com/9QT4Odj6bI

That followed the Premier attended an event organized by United We Roll, a group linked to the far-right Yellow Vest movement,  shortly after a widely-covered rally in Ottawa that was noted for the presence of white nationalist Faith Goldy and other far right-demonstrators.

When asked about this, More defended the group and dismissed suggestions the “hard-working Saskatchewan citizens coming down to this rally” were “racist.” Moe pledged to attend further rallies.

Last year, Moe also issued a statement complaining the use of the word “genocide” by the inquiry into Missing and Murdered Indigenous Women and Girls “distracted” from its recommendations.

In 2018, while Moe called for the removal of an Indigenous protest camp, called the Justice for Our Stolen Children, he refused to visit: “I haven’t, in fairness, really conversed with anyone directly that is running a protest or a camp in front of the legislature,” he told the media .

Last month, Moe attempted to politicize traditional Cree ceremonies by demanding Ottawa ban them from holding ceremonies to fight COVID-19, despite participants following social distancing guidelines and it being outside Moe’s jurisdiction.

Meanwhile, local First Nations have accused Moe’s government of “negligence” and “disrespectful treatment” over its response to COVID-19 on reserves.