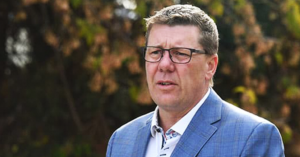 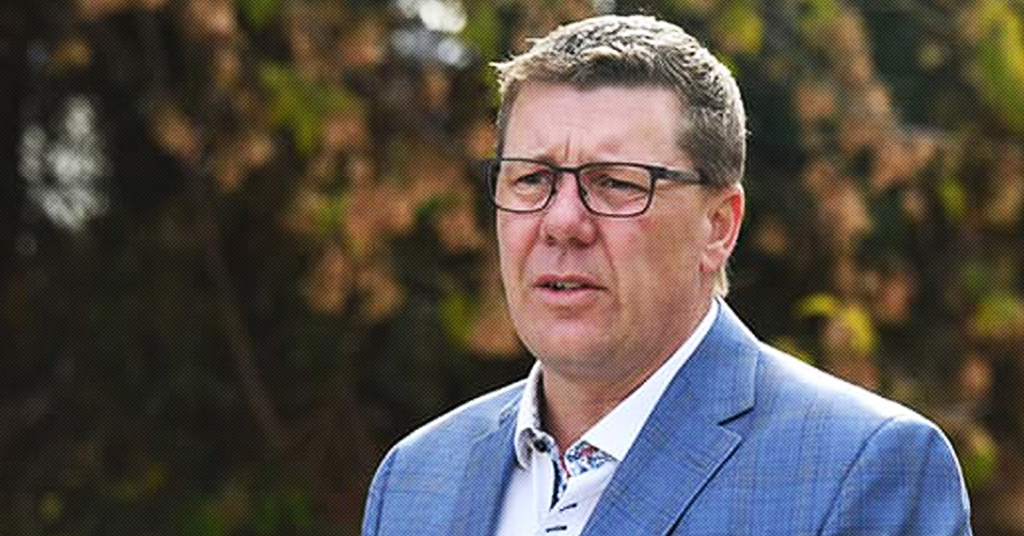 Saskatchewan Premier Scott Moe admits he was arrested in 1994 for drunk driving and leaving the scene of an accident, but he denies all of the charges and he says the charges were later withdrawn.

But Saskatchewan Premier Scott Moe failed to disclose at least one other incident where he was arrested for impaired driving.

According to court records newly obtained by PressProgress, Moe was arrested in 1994 on two counts: Impaired driving and leaving the scene of an accident. 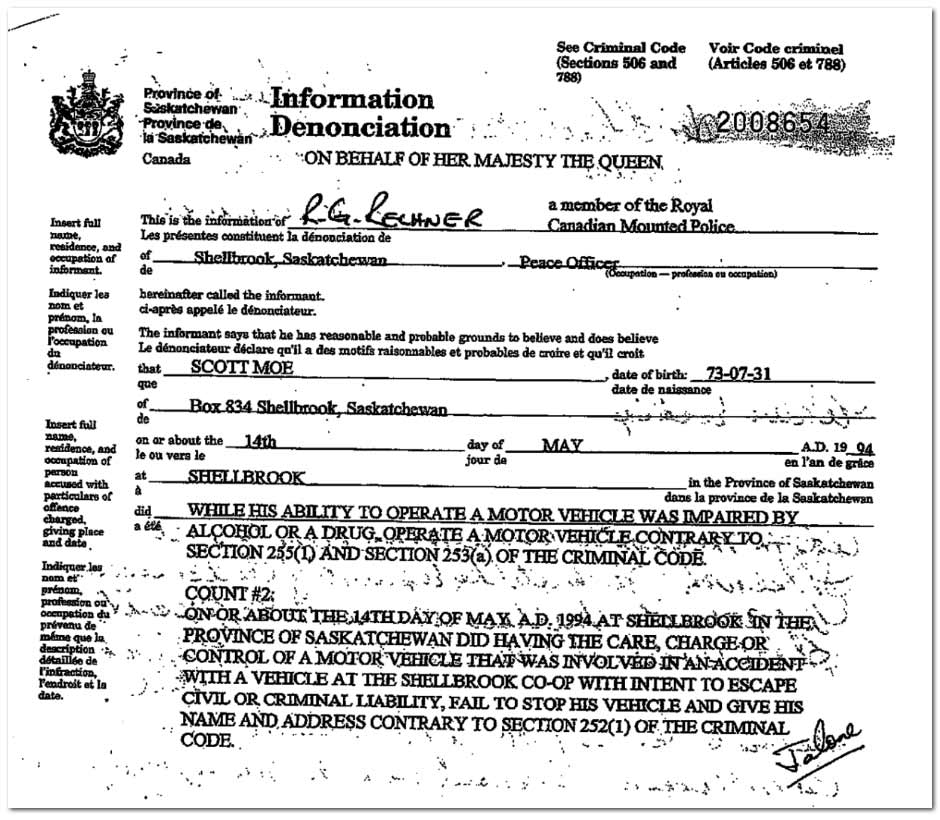 The records, based on information from RCMP officer R.G. Rechner, state that Moe was arrested on May 14, 1994 after hitting a vehicle at the Shellbrook Co-op.

According to the records, Moe was charged for driving “while his ability to operate a motor vehicle was impaired by alcohol or a drug.”

The second count states: “On or about the 14th day of May AD 1994 at Shellbrook in the Province of Saskatchewan did having the care, charge or control of a motor vehicle that was involved in an accident with a vehicle at the Shellbrook Co-op with intent to escape civil or criminal liability, fail to stop his vehicle and give his name and address contrary to Section 252(1) of the criminal code.”

The Saskatchewan Party did not respond to questions from PressProgress sent Wednesday morning about the 1994 arrest, but Moe later confirmed the charges hours later in a lengthy public statement to the media:

“In 1994, when I was 20 years old, I was also charged with impaired driving and leaving the scene of an accident. Those charges were later withdrawn because I was not impaired and I did not leave the scene. I exchanged information with the owner of the other vehicle and I called in the accident to the police. Because the charges were withdrawn, the incident has not been part of my public disclosure but I am doing so now as I expect to be asked at some point in time, in particular in the environment and the atmosphere that we are operating in here today.”

“There was a car accident in the community where I live, Shellbrook, which I was driving, we had phoned the accident in to the police, we exchanged information with the other driver and there was charges that were put forward but those charges were later stayed or dropped by the prosecution … In this particular incident I was innocent and the courts did drop the charges that were originally put forward.”

Moe confirmed that he had consumed alcohol that day, but denied he was impaired: “I had that day but I was innocent of the charges.”

Moe said no breathalyzer was administered on the scene and that the other driver was not injured in the accident.

Court documents show that after a number of trial delays and Moe switching up his legal counsel, prosecutors eventually withdrew the charges nearly two years after the fact in 1996. 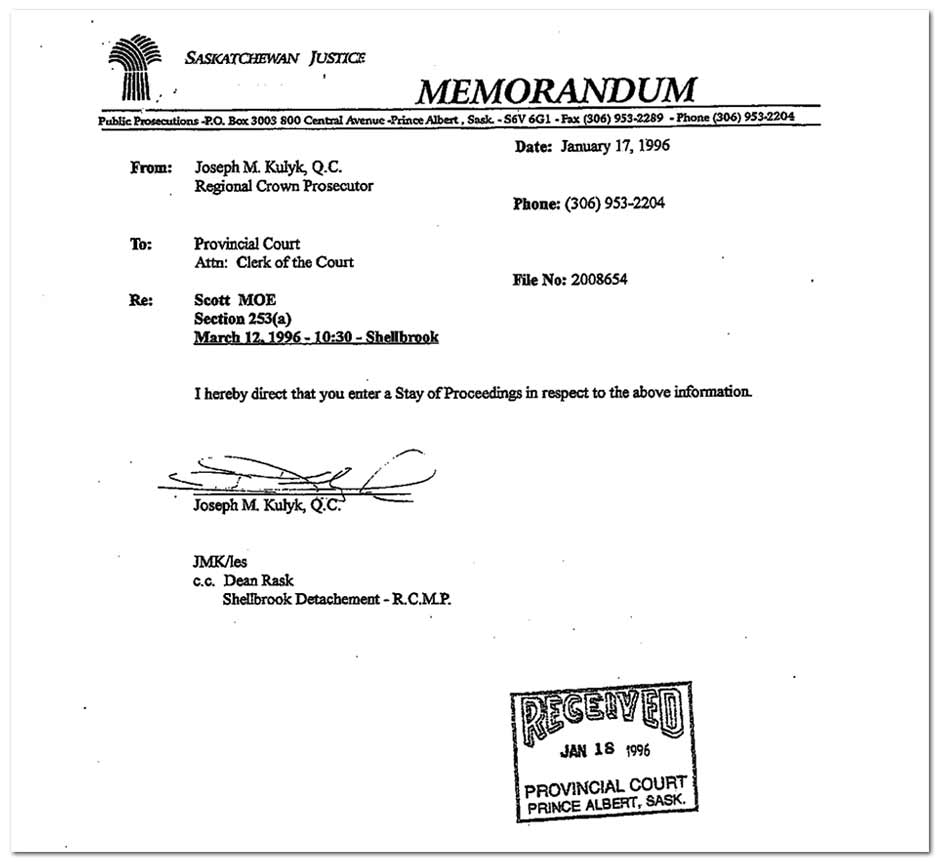 Moe has never discussed his 1994 impaired driving arrest despite the fact that his driving history has made headlines on a number of occasions in recent years.

Moe added that the reason he disclosed the information Wednesday was because he expected “some institutions would bring forward this other information and I felt it was best that I offer it to the people of the province.”

At the time, the Saskatchewan Party defended Moe, stressing that a candidate should not be disqualified from seeking public office in situations where “a person makes a mistake, pays the price, acknowledges their mistake and makes the changes necessary in their life to ensure it never happens again.”

“While we do not condone driving while impaired,” the Sask Party said, Moe and another candidate made “clear that they regret their actions, and will never do it again. We believe them, and are further assured by their actions since.” 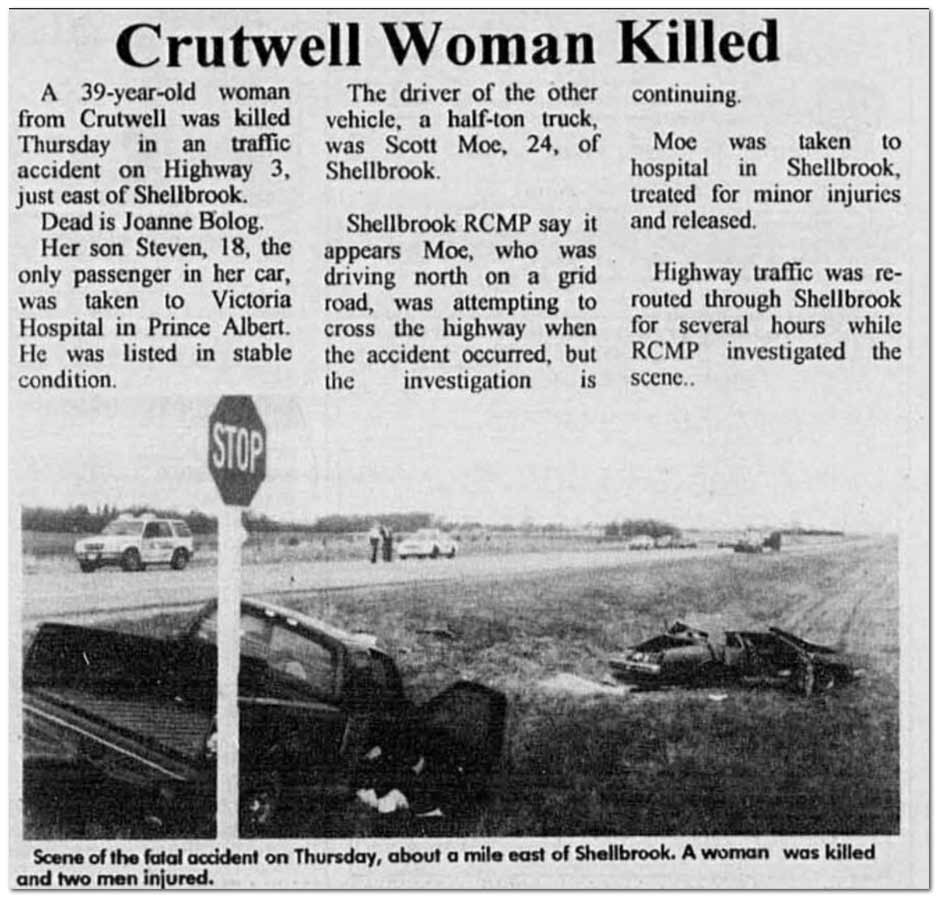 This week, nearly three decades after the crash, Moe finally apologized to Balog’s sons after they became aware that the man who killed their mother was now the Premier of Saskatchewan.

Steve Balog, who was injured in the accident that killed his mother, said that he does not believe justice was served.

“I am literally destroyed knowing this man is our premier,” Balog wrote on Facebook. “Scott Moe should have paid the price for my mother’s life and the scars and dislocated rib I live with for the rest of my life.”

Moe has denied alcohol was a factor in the 1997 crash.

Here are the police and court records relating to Moe’s 1994 arrest: