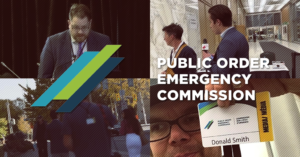 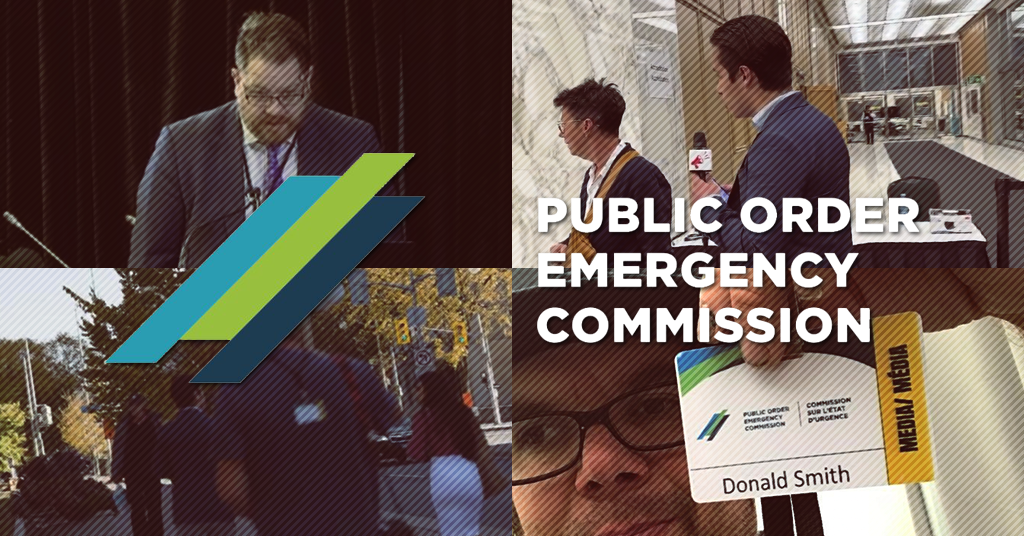 Only one full day of testimony into the Emergencies Act inquiry, and right-wing media outlets and convoy bloggers are already turning the hearings into a circus.

The Public Order Emergency Commission, which was automatically triggered by law, will spend the next several weeks reviewing the federal government’s decision to invoke the Emergencies Act in February 2022 to end the convoy occupation of Ottawa.

The commission will hear testimony from 65 witnesses, including local city and police officials, convoy organizers and even Prime Minister Justin Trudeau.

However, it is quickly becoming clear that right-wing media outlets intend to be a disruptive presence at the hearings and seize on opportunities to generate video clips that can be repackaged for convoy supporters online.

Ottawa resident Zexi Li, who is the lead plaintiff in a class action lawsuit against convoy organizers, shared disturbing testimony Friday describing targeted harassment, including one “serious threat” against her that was investigated by police.

However, Brendan Miller, a lawyer representing convoy organizers, used his time to interrogate Li about an off-hand joke she once made comparing the atmosphere on Ottawa streets to a horror movie called “The Purge.”

“In the movie ‘The Purge’, you agree that it’s about for one day in the United States … that there’s no laws in force and the population can commit murder?” Miller asked Li.

After Li agreed this was an accurate description of the premise of the movie, Miller pounced: “So people could potentially commit murder, that was your concern?”

“I did not make that statement,” Li clarified.

The @POECommission is already turning into a circus.

Lawyer Brendan Miller, who represents some of the convoy organizers, used his time to grill Ottawa resident Zexi Li about the movie “The Purge,” in which people murder one another for sport. pic.twitter.com/1I9c4Hf7F5

In another strange moment, Miller pressed Ottawa City Councillor Mathieu Fleury to define the word “microaggression” on the public record.

It’s unclear what relevance Li’s views on “The Purge” or Fleury’s understanding of words ridiculed by the online far-right have to do with the federal government’s decision to invoke the Emergencies Act.

But many of these off-topic and ultimately irrelevant sideshows are being instantly clipped and repackaged by right-wing media outlets, who are presenting their viewers with a bizarro version of the proceedings online.

Ezra Levant, owner of Rebel Media, has stated that over a dozen content producers for his website had been accredited by the Commission and issued a fundraising appeal requesting money to rent a “large Airbnb right next to the commission.”

“We’ve set-up a field office and living space for our team to be in the heart of the action,” Levant told prospective donors. “We’re rotating 15 reporters through our Ottawa HQ over the next six weeks.” 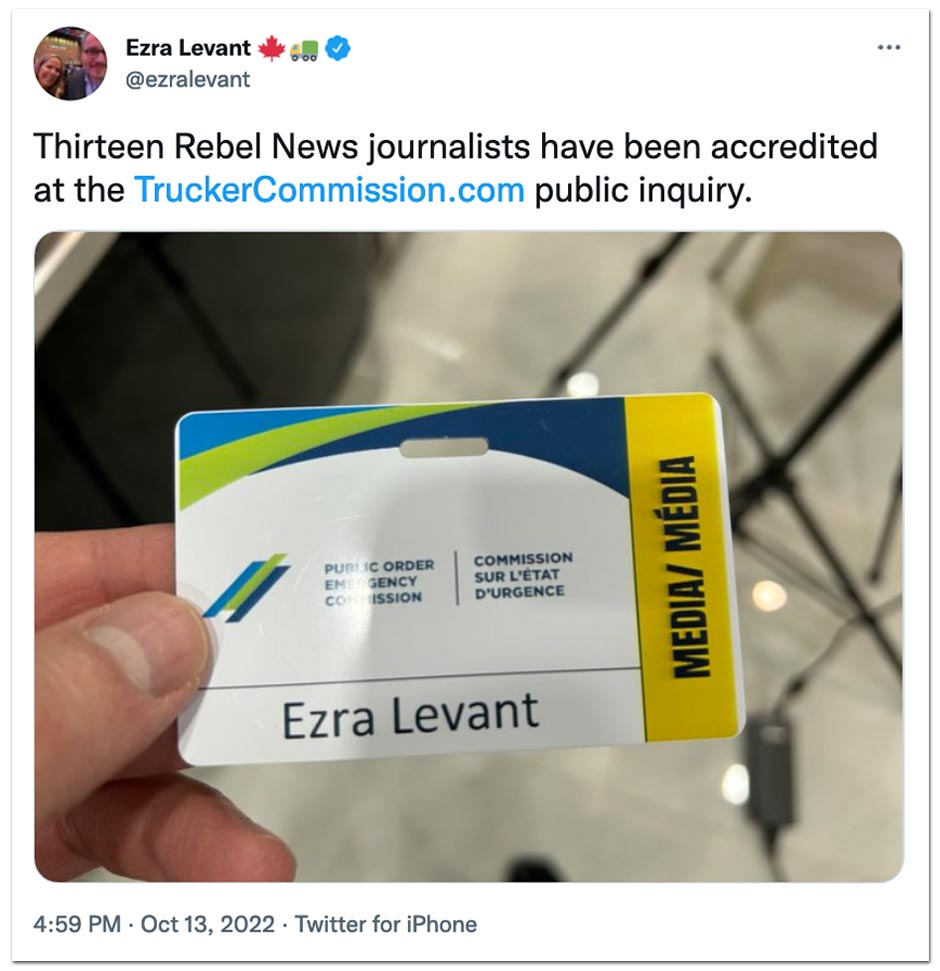 Another website, run by former Rebel personality Keean Bexte is also attempting to raise money in support of his “on-the-ground coverage” of the commission, which he characterizes as a “Trudeau trial” (Trudeau is not facing any criminal charges nor is the public inquiry a “trial”).

Rebel Media and Bexte won’t be alone in Ottawa — other right-wing sites, including the Western Standard and True North Centre have also been formally accredited by the Commission.

Another site that was accredited, “Freedom Central Canada,” has been associated with anti-lockdown protests and regularly livestreams convoy events. One person affiliated with the group was part of an mob that protested public health rules inside a toy store at the West Edmonton Mall last year.

One blogger that will no longer be accredited to cover the hearings is Donald Smith.

Smith has been associated with anti-lockdown protests for the last few years and was originally granted accreditation to cover the inquiry on behalf of his Substack blog, called: “News Now Canada Independent Media.”

In advance of the hearings, Smith posted on his blog that he planned to “confront” a journalist with Global News. Smith has been previously charged with criminal harassment over an incident in which he confronted 911 dispatchers in Vancouver.

Smith spent day one of the hearings tweeting that witnesses were communists. Smith later posted a video showing him confronting Zexi Li, berating the witness as a liar and a “commie” as she left the building.

In addition to his previous comments stating that he planned to “confront” journalists while he was in Ottawa, he also spent the day aggressively confronting witnesses as they left the building, calling them liars and “commies.” pic.twitter.com/eAohSkqDZJ

“The Commission’s media protocol includes a policy prohibiting aggression or harassment by any member of the media,” Commission spokesperson Michael Tansey told PressProgress.

“Mr. Smith is no longer accredited.”

Smith later tweeted: “Well, I am on my way home back to Oshawa because the left-wing commies are attacking me.”

In a statement to PressProgress, Smith reiterated he had intended to follow through on his stated plan to confront a journalist from Global News because he took issue with her “words.”

Smith confirmed he was previously charged with criminal harassment, but insisted he was “falsely criminally charged” and has “the full 911 tapes” to prove it.

However, Smith was hardly the only one with an accredited media pass confronting witnesses outside of the hearings room Friday.

Diaz-Berthiaume repeatedly addresses McKenney, who uses they / them pronouns, as “miss” and “ma’am.”

Catherine McKenney refuses to say Freedom Of Speech is important!

In another video, Diaz-Berthiaume is seen following witness Zexi Li outside the building and into the street, accusing her of “lying” during her testimony.

Smith is seen in the same video walking only a few steps behind Diaz-Berthiaume and Li while shouting at an inquiry witness who had just provided testimony about dealing with targeted harassment and serious threats. 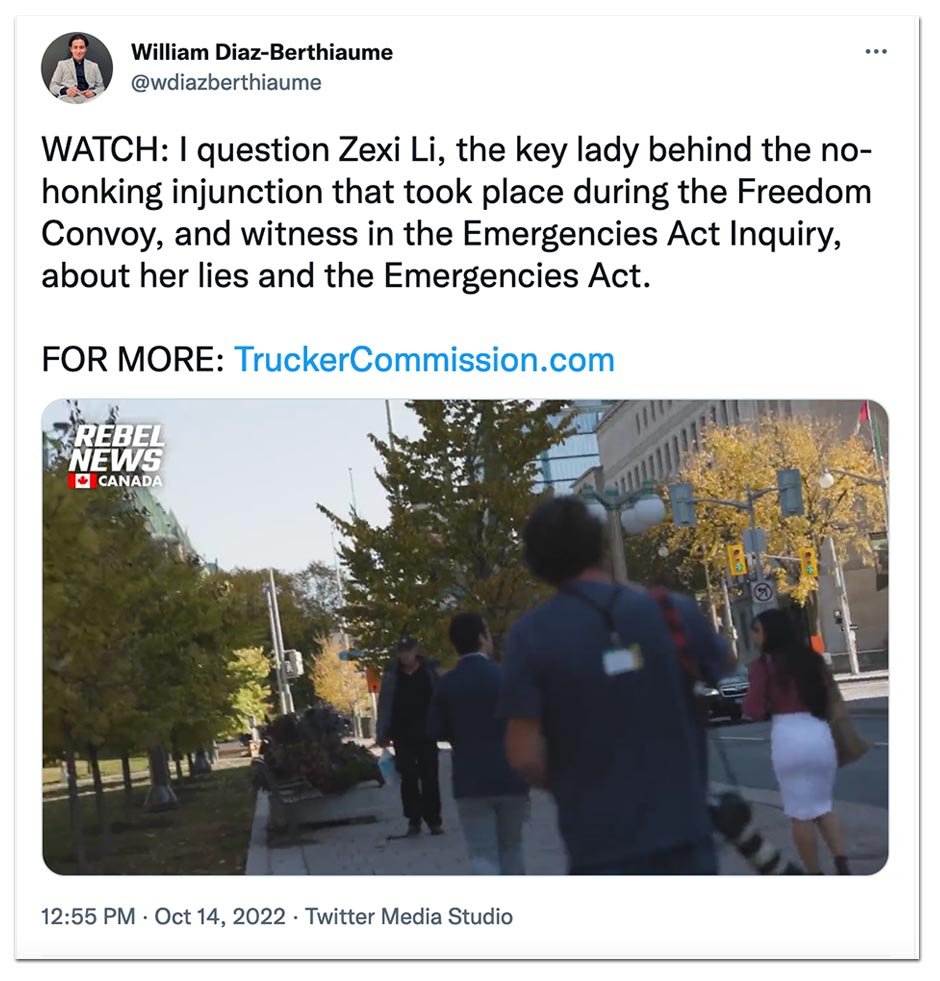 “It’s great, we have access inside the building, we’re able to scrum the people coming out, Omar Alghabra is going to show his little face in the building,” Diaz-Berthiaume later bragged to Levant in another video.

“I don’t think they’re going to be happy to see us.”

Hearings are scheduled to run until Friday, November 25.