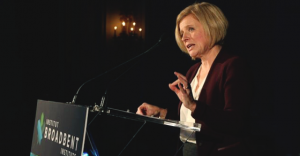 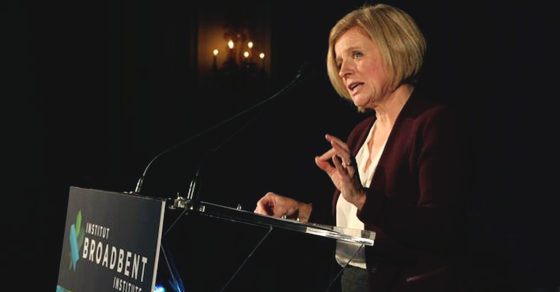 Alberta Premier Rachel Notley took square aim at the myth that only conservatives get how to manage Canada's resources.

Conservatives like to present themselves as the energy industry’s best friends.

But are they really?

Speaking at the Broadbent Institute’s 2015 Progress Gala, Alberta Premier Rachel Notley took square aim at the myth that only conservatives get how to manage Canada’s resources.

“Conservative governments in Alberta and in Ottawa claimed to be pursuing policies in the interests of the energy industry,” Notley said.

“The failure of those former governments to understand the challenge posed to the world by climate change, and to do our share to address it — have become one of the energy industry’s biggest problems.”

Notley added that thanks to the “failed policies” of conservatives, “familes all across Alberta — and all across Canada — are paying the price.”

She said conservatives mismanaged the economy by failing to diversify the economy, add value on energy products at home and undermined the industry by resisting efforts to deal with climate change.

Although former Premier Jim Prentice said he was “very pleased” with his leadership on climate change, his Progressive Conservative government was routinely criticized for doing nothing. Just last year, Alberta’s auditor general ripped the former PC government for failing to report on its own greenhouse gas reduction strategy for six years in a row.

Despite Prentice vowing to build pipelines “in every possible direction,” the PCs managed to build exactly zero pipelines, costing the province hundreds of millions of dollars in lost revenues. Maybe their hardline approach had something to do with that?

Meanwhile, the opposition Wildrose only formally “accepted” the science showing climate change is caused by humans in 2013. Leader Brian Jean has even gone so far as to suggest the NDP government’s attempts to address climate change will “open the door to fiscal disaster.”

Federally, under Harper’s Conservatives, Canada abandoned Kyoto, dismantled environmental laws, failed to make good on a pledge to regulate the oil and gas sector (before Harper finally called the idea “crazy”), saw the RCMP and CSIS view environmental critics as threats and turned the National Energy Board into what one member called a “Kafkaesque” farce.

Looking forward, the Conservatives just elected an MP in Calgary who apparently believes renewable energy exists only in a “dream world.”

With characters like these running the show for years, is it any wonder Alberta’s had such a tough time gaining social license?