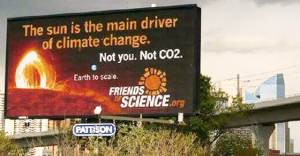 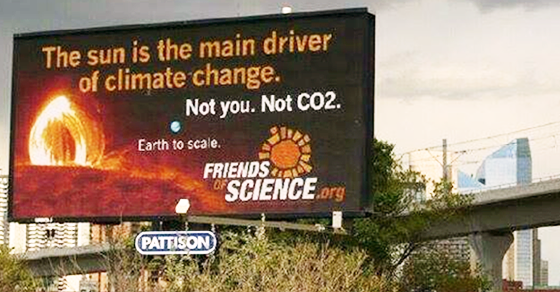 Canada's biggest newspaper chain has pulled a story sponsored by a group that suggests scientists are not worried about the impacts of climate change.

Editor’s note: Following publication of this post, the sponsored story was restored to the Calgary Herald’s website, but does not appear on the websites of several other Postmedia newspaper websites where it also appeared earlier. This post has been updated to include comments from Postmedia.

Canada’s biggest newspaper chain pulled a story sponsored by a group that suggests scientists are not worried about the impacts of climate change and blames warming temperatures on sunshine.

Postmedia, a company that owns most of Canada’s major daily newspapers, published a sponsored story by a group called Friends of Science across its chain Tuesday.

Sponsored stories are paid advertisements that mimic the appearance of news articles.

Titled Climate leadership catastrophe, Friends of Science says “contrary to popular opinion,” warnings about the impacts of climate change “has not been from scientists”:

“For almost two decades, we’ve been told to expect a climate catastrophe and that it’s our fault.

This prevailing notion has not been from scientists, contrary to popular opinion. It has been popularized by self-serving politicians and their bureaucracies, cause-addicted celebrities and environmental groups that form an echo chamber driven by dollars from ideologues at various foreign philanthropic funds.”

The sponsored story also ran with a photo of conservative pundit Ezra Levant. Friends of Science describes him as possessing “psychic” powers:

It also goes on to attack the Alberta government’s recent decision to phase out coal-fired power plants – even though much of the world is already moving away from coal and global demand is plummeting:

“The Alberta government blithely steamed into its Climate Leadership Plan without properly assessing the costs and consequences of early ‘phase-out of coal.’ It’s not like Friends of Science Society didn’t tell them.

A disclaimer at the bottom of the sponsored story published by Postmedia states:

“This story was provided by Friends of Science for commercial purposes. Postmedia had no involvement in the creation of this content.”

Postmedia did not initially respond to multiple requests for comment from PressProgress on Wednesday to explain why the story no longer appeared on multiple Postmedia newspaper websites, including the Montreal Gazette, Ottawa Citizen, Calgary Herald, Vancouver Sun and Postmedia’s online hub Canada.com.

Late Thursday, a Postmedia spokesperson told PressProgress the story had been “taken down” due to a “technical issue”:

The sponsored story once again appears on the Calgary Herald’s website.

The story does not appear to be back up on the websites of the Montreal Gazette, Ottawa Citizen, Vancouver Sun or Canada.com.

Friends of Science has previously gained notoriety for running billboards that claim “the sun is the main driver of climate change. Not you. Not CO2.”

After running similar billboards around Quebec, the Montreal Gazette published a letter from the president of the Quebec Association of Science Communicators. He said Friends of Science’s misleading claims an “attack on Quebec’s science culture”:

“There’s a billboard on Highway 40 disfiguring the Montreal landscape by claiming that ‘The sun is the main driver of climate change.’

This duplicity undermines the scientific education and awareness that we have been building for decades. It is all the more vicious since by their very name, ‘Friends of Science’ — the Albertan organization that believes human behaviour is not responsible for climate change — usurps the credibility of science in order to misinform the public.”

In 2012, Mike de Souza, who was a Postmedia reporter at the time, revealed Friends of Science was kick-started with $175,000 in seed money from Talisman Energy in 2004, which was “channelled through the University of Calgary” with the help of political science professor Barry Cooper.

The university administration shut down the accounts after an audit concluded they were being used for partisan activity, de Souza reported.

Barry Cooper is a columnist with the Calgary Herald.