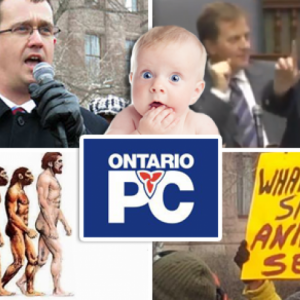 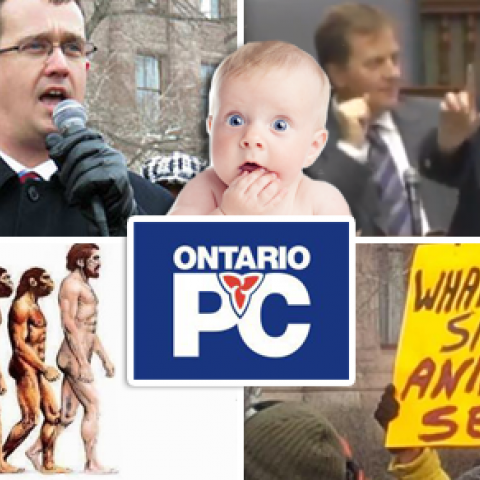 What on Earth is going on in Ontario? With the Ontario Provincial Police asking questions about an alleged Liberal bribery scandal, you’d think all the heat would be on Premier Kathleen Wynne. But Ontario’s Progressive Conservatives have somehow managed to steal the spotlight away and shine it on their own mind-boggling shenanigans — as they fight the modernization […]

What on Earth is going on in Ontario?

With the Ontario Provincial Police asking questions about an alleged Liberal bribery scandal, you’d think all the heat would be on Premier Kathleen Wynne.

But Ontario’s Progressive Conservatives have somehow managed to steal the spotlight away and shine it on their own mind-boggling shenanigans — as they fight the modernization of Ontario’s sexual education curriculum or express disbelief in evolution… instead of holding the government to account. Here’s a helpful round-up of the Ontario PCs recent downward spiral:

The PCs have “fostered unholy alliances” with “marginal groups and outliers” to fight sex-ed, says the Toronto Star’s Martin Regg Cohn, who suggests getting into bed with these groups threatens to “push the Tories back in time, transforming the once-tolerant PCs into a haven for homophobes.”

One group, Campaign Life Coalition, displays pictures of the “gay activist Premier of Ontario” flanked by a rainbow flag on its website. Also on their website, Jack Fonseca, a CLC project manager, blames “gay teen deaths” on “militant gay-activist organizations who don’t really care whether people with same-sex attraction live or die” and use “people with same-sex attraction as pawns in their war against the Judeo-Christian world view.” He also describes AIDS as a “gay disease.”

And here’s CLC’s analysis of the “romantic dating” unit in the 2010 sex-ed curriculum: And then Wednesday night, after Education Minister Liz Sandals suggested the Tories “could opt out of teaching about evolution too,” Chatham-Kent PC MPP Rick Nicholl’s shouted back: “that’s not a bad idea!”

Asked by reporters later, Nicholl’s explained, “for myself, I don’t believe in evolution.”

3. PC MPPs address angry protesters who fear children will be taught how to have “safe animal sex”

You know what comes after learning about the anatomy of the human reproductive system, don’t you?

Hate to reign in their excitement, but since the new curriculum will now teach children the concept of ‘consent’ (and since most barnyard animals aren’t able to give consent for the simple fact that they can’t talk), Ontario’s new program will most likely make “animal sex” even less likely than it currently is (Note to readers: bestiality is currently illegal in Canada).

Earlier in the week, PC leadership candidate Monte McNaughton, who has been endorsed by Rob Ford, was quoted saying “it’s not the premier of Ontario’s job, especially Kathleen Wynne, to tell parents what’s age-appropriate for their children.”

That additional ‘especially’  McNaughton threw in was criticized as a veiled allusion to the premier’s sexuality.

When asked about his comments, McNaughton clarified that his extra “especially” was in reference to bribery allegations directed at the Premier’s Office — and the arrest of a former deputy education minister on child pornography charges. What does that mean?

5. Lisa MacLeod seems to think affordable daycare is a plot by the government to steal your babies

But don’t think these kinds of antics are anything new for the PCs. Only a few months ago, former PC leadership candidate Lisa MacLeod claimed an affordable childcare motion was just like the government seizing babies “at six months old and put[ting] them into an institutionalized setting until they’re 18.”

“I, as a Progressive Conservative, believe that the best person to look after your child is you,” MacLeod declared:

What will Ontario’s PC’s do next?

Only time will tell, but Ontarians can be reasonably sure they won’t have too much trouble topping themselves.