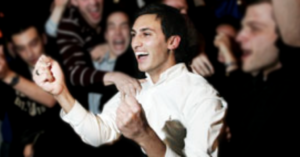 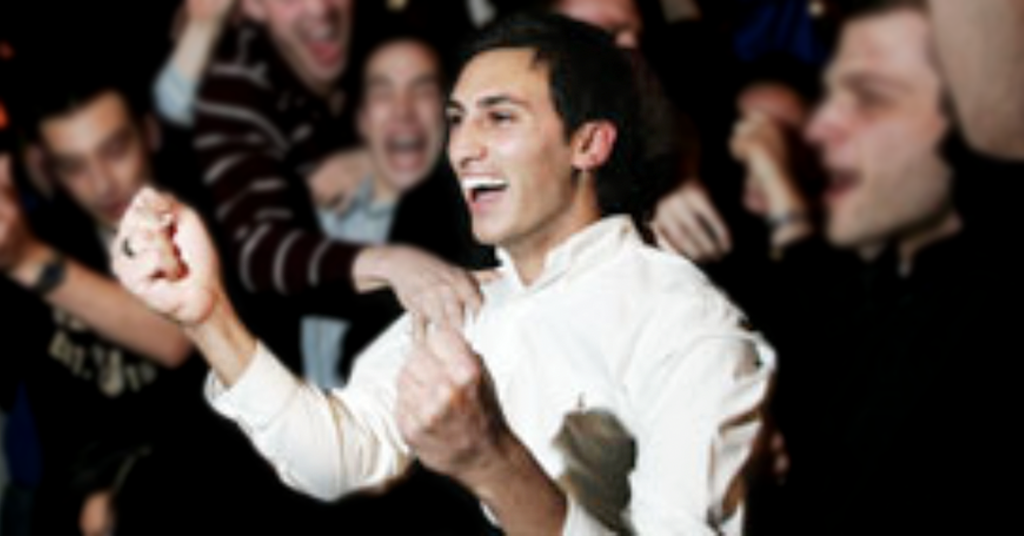 This article is more than 8 months old
New

by Mitchell Thompson and Luke LeBrun

This story includes subject matter and images relating to anti-Black racism and slavery that may be disturbing for readers.

Stephen Lecce, Ontario’s Minister of Education, was a participant in a slave auction during his time as a fraternity leader at Western University – an event which has since been outlawed at his own fraternity and elsewhere following high-profile controversies on American college campuses.

Educators who work with racialized communities say the event is “disgusting” and “abhorrent” and believe Lecce has an obligation to demonstrate accountability.

Lecce, who graduated in 2008, is a former aide to Prime Minister Stephen Harper and became one of the youngest members of Doug Ford’s cabinet after the 2018 election.

Before becoming education minister, Lecce served as the president at Sigma Chi fraternity’s Epsilon Omicron chapter during his days at Western in the late 2000s.

“Sigma Chi is one of the oldest active fraternities on campus,” Lecce told recruits at the beginning of his senior year. “Our alumni brothers who range from academic scholars, corporate executives, philanthropists, politicians and community leaders continue to live the values they have learned through Sigma Chi many years ago.”

Memberships in fraternities can open doors to elite business and political networks for young and ambitious men. Western’s Sigma Chi chapter counts Edward Rogers, Chairman of Rogers Communications, as its corporation president and “brothers” are regularly invited to events at the Albany Club, which describes itself as “the premier private club for leaders in Canada’s business and Conservative political spheres.”

But Lecce’s fraternity’s website postings suggest this power and privilege, at times, found other means of expression.

Archived postings on Sigma Chi’s website indicate the fraternity held a “slave auction” on multiple occasions during Lecce’s time at the frat house. 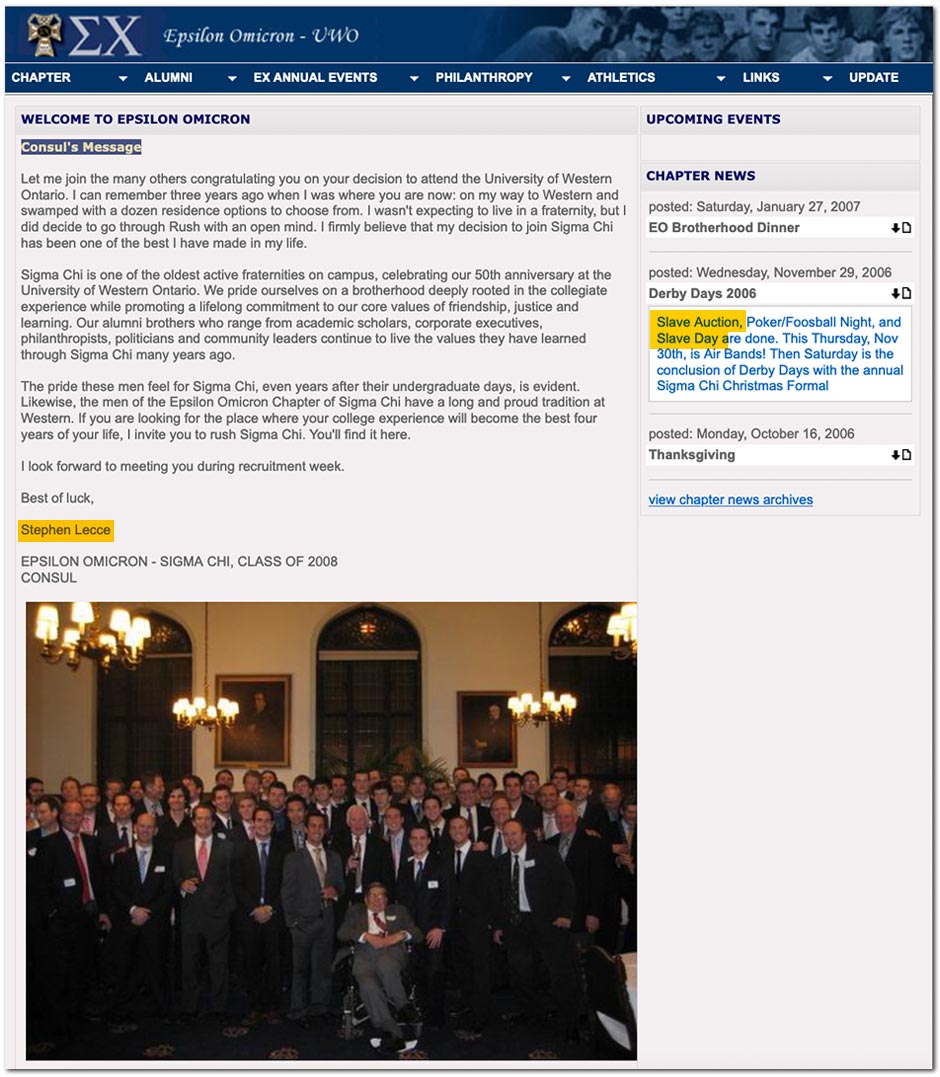 According to postings on the Sigma Chi website, the fraternity held a “slave auction” as a part of this initiative on November 28, 2006 followed by “Slave Day” two days later on November 30.

“Stephen Lecce” is identified as one of the “slaves” auctioned off that evening. The website explains: “Slaves (are) obligated to be available from 10 AM until 6 PM, or other time negotiated with ‘owner’.”

Postings about the following year’s “Derby Days” indicate another slave auction took place. One of the “slaves” at that event is identified only as “Brother Stephen.” 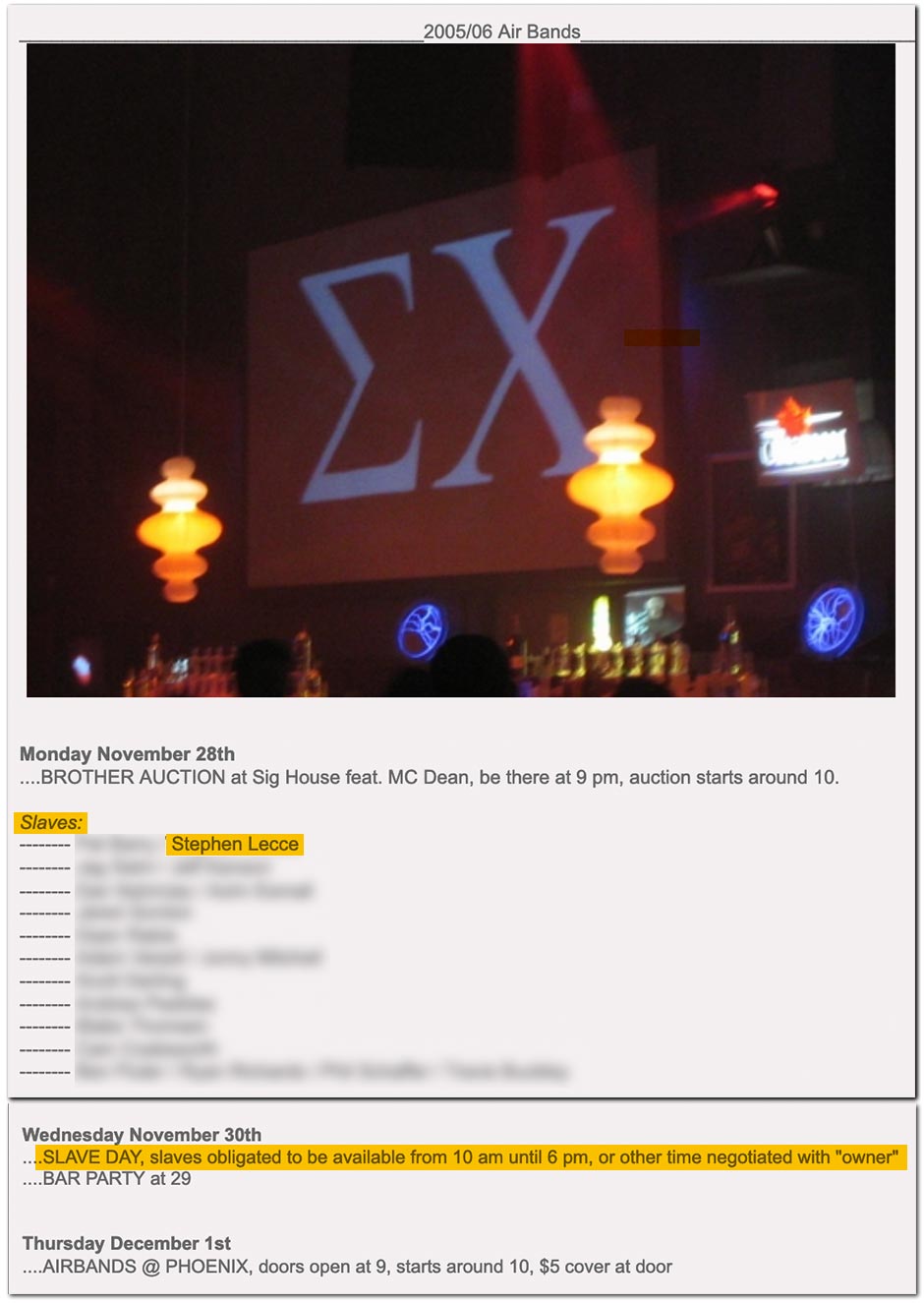 Nigel Barriffe, President of the Urban Alliance on Race Relations, had a one word response when PressProgress produced a copy of Lecce’s Sigma Chi website: “Wow.”

“It’s extremely worrying that this guy has been in charge of the largest school system in Canada for the last four years,” Barriffe, who is also an elementary school teacher in Ontario, told PressProgress.

“At a time when we see the rise of right-wing extremism, when we see right-wing politicians that continue chase after them to try to curry their favour, when we continue to see swastikas and symbols of anti-Black racism that are painted in schools, it is just abhorrent that we continue to have an education minister that won’t distance himself from these disgusting behaviours.”

According to a former Ontario Sigma Chi chapter president who spoke to PressProgress on background on condition of anonymity, the Western chapter’s specific use of the term “slave auction” was highly unusual in their experience.

“Oh my God,” the former consul told PressProgress. “No, we would never.”

“I imagine that is something that would probably happen at a Southern chapter,” they said, explaining fraternity “culture is very different across states and across borders.”

The former Sigma Chi president did recall auctions involving fraternity members, but insisted they were not called “slaves” and there were “no connotations to anything racial.”

The 2018 edition of Sigma Chi’s “Derby Days Guide” explicitly bans any event or activity centred around the “auction of human beings or servitude” or other “racially or sexually insensitive activity or material.”

Sigma Chi Canada did not respond to requests for comment from PressProgress. It is unclear when the policy was adopted or whether any version of it was in place during Lecce’s time at Western.

American fraternities have been embroiled high profile controversies over slave auction events for many years. In 2019, a Democratic state senator in Virginia came under fire from activists in his own party after an old yearbook showed his fraternity held a “slave auction.”

In 1988, a “slave auction” held by a University of Wisconsin fraternity made national headlines and triggered large anti-racism protests on campus.

Experts note slave auctions are deeply rooted in fraternity culture and impossible to disentangle from the United States’ history of white supremacy and anti-Black racism.

Nolan Cabrera, a University of Arizona educational policy professor whose work focuses on racial dynamics on American college campuses, points out “the history of traditionally white Greek letter organizations is one of exclusion, it is actually built into their structures.”

“The structure of having a house and so much happening in secret behind closed doors is what leads to so many manifestations of overtly racist activity (e.g. slave auctions),” Cabrera told PressProgress. “The house structure frequently leads to a lack of accountability for this type of racism, and the generally homogenous population of members further contributes to this social dynamic.”

“Historically, the housed traditionally white Greek letter organizations have been not just racially exclusive but also tending to have high concentrations of wealthy students as well. They have been scenes of a lot of elite social reproduction and are some of the most segregated areas on any college campus.”

Sigma Chi, Lecce’s own fraternity, was racially segregated under an official “whites only” policy until as recently as the 1960s. It also counts Confederate soldiers among its founding fathers.

An official handbook issued to Sigma Chi members celebrates founder James Parks Caldwell, a Confederate soldier, for his refusal to “renounce his allegiance to the Confederacy” and “fidelity to principle” which “led him to remain loyal to the Southland.” 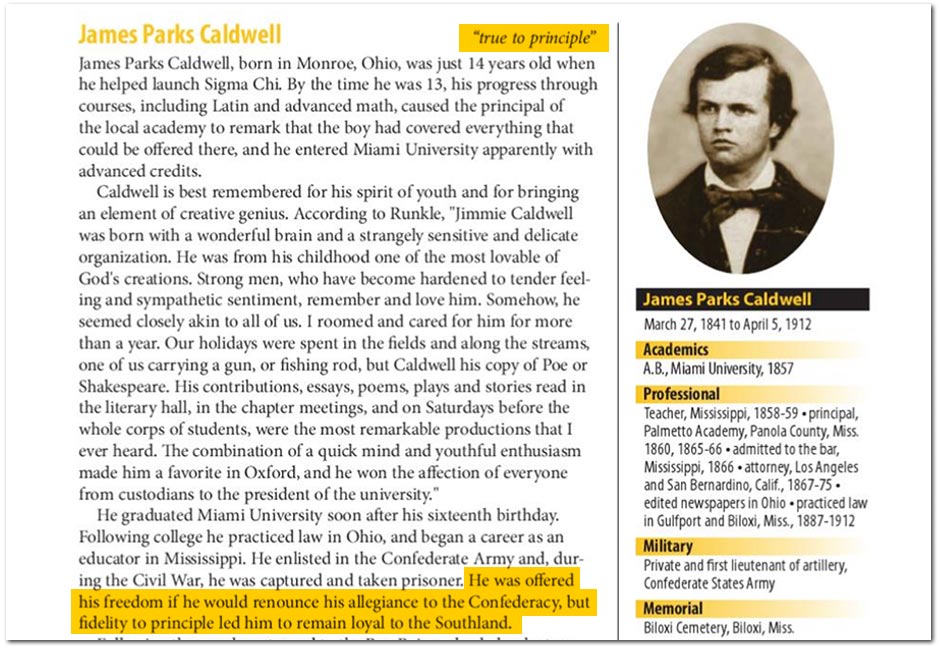 Sigma Chi International would not confirm whether or not the alleged copy of its initiation ritual is accurate. On Facebook, a post commemorating Caldwell’s birthday is surrounded by identical posts from members stating: “All honour to his name.”

“Because we are a fraternity, technically we are kind of a secret society, you can’t really talk about the ritual,” a former Sigma Chi president explained to PressProgress. “It’s no crazy secretive Illuminati crap or anything like that … there are secretive aspects of the fraternity that we just can’t talk about with people outside of the fraternity.”

“We do have a number of founders who go back to 1855,” they acknowledged of the fraternity’s Confederate past. “Honestly, it’s not something that we’re proud of, it’s a tough subject.”

In the 1980s and 1990s, multiple Sigma Chi chapters in the United States came under fire for burning crosses during their initiation rituals. 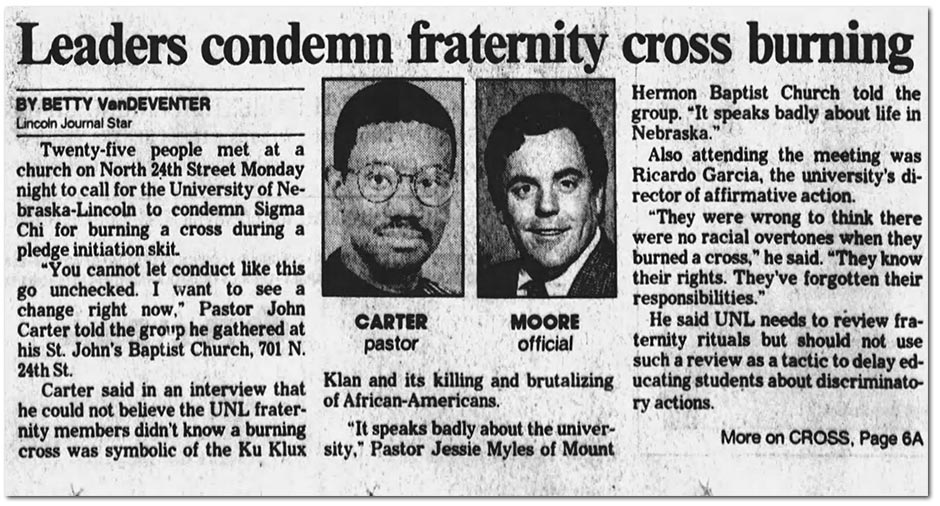 Following one cross burning incident at the University of Nebraska-Lincoln in 1997, a Sigma Chi chapter claimed its burning of a six-foot wooden cross at a ceremony that included a Confederate flag and fraternity members dressed in Confederate soldier costumes was not intended to have racial overtones.

Instead, they said the burning cross was meant to mimic Roman Emperor Constantine’s vision of a flaming cross in the sky — a reenactment to the founding of Sigma Chi’s “Constantine Chapter, which was founded by Confederate soldiers.

The fraternity still celebrates these Confederate soldiers to this day, featuring paintings of Confederate war heroes and Sigma Chi members in front of a Confederate flag both on its website and its museum in Evanstown, Illinois. 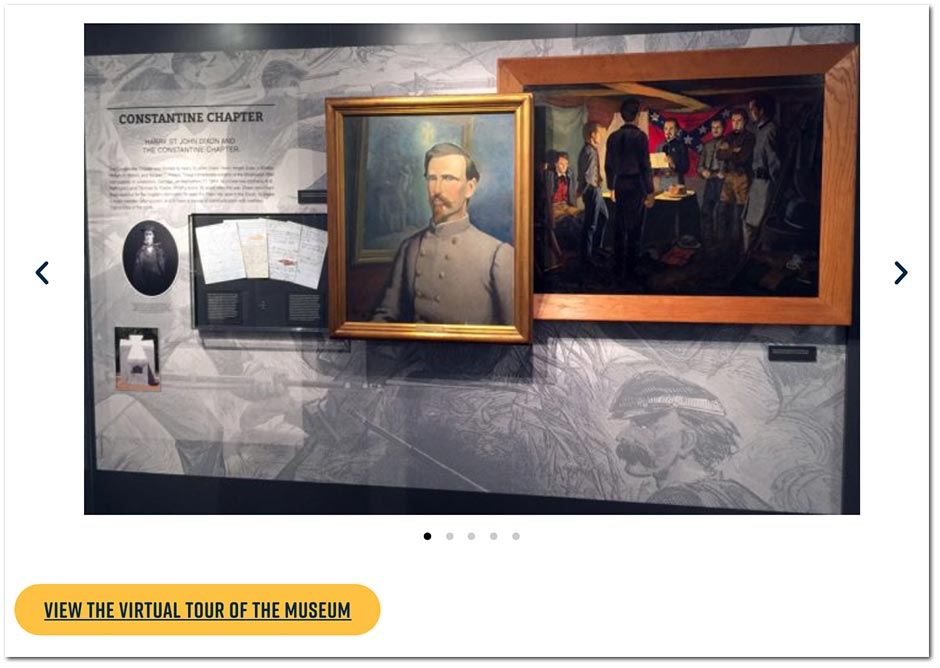 Sigma Chi International directed PressProgress to a “diversity and inclusion” page on its website that includes a statement issued in the wake of the police murder of George Floyd acknowledging the fraternity’s history of racism:

“Our organization’s founding precedes the Civil War and occurred at a time when slavery was still legal in parts of the United States. Any organization that has as much history as Sigma Chi inherently has grappled with the issues of racial inequality and prejudice in its own way; Sigma Chi is no different … While the leaders of Sigma Chi today had nothing to do with this part of our history, we nonetheless must acknowledge it and sincerely apologize for it.”

Sigma Chi International did not respond to questions about why it displays artwork glorifying Confederate war heroes in its museum and website.

During Lecce’s time running the fraternity, its website promoted an award named after the same group of Confederate soldiers that founded Sigma Chi’s Constantine chapter.

In 2019, Lecce used his MPP’s constituency office for a Sigma Chi promotional video where he praised “the value-based leadership that Sigma Chi has ingrained in generations of others” and said his highest priority as a politician is to inspire “the audacity of hope.” 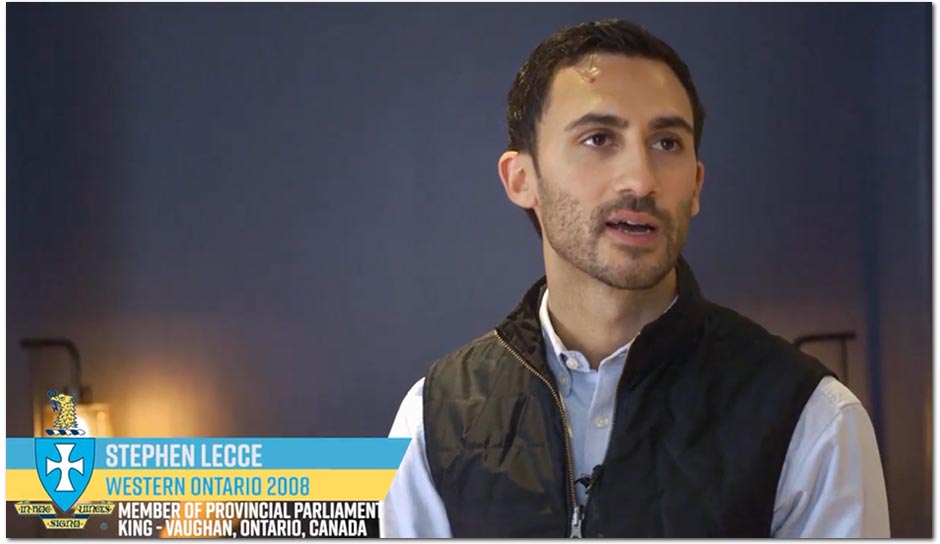 Neither Lecce nor the Ontario PC Party responded to requests for comment from PressProgress.

Though the Education Minister did not answer questions about whether he has any  misgivings about the slave auctions or whether he’d like to see his fraternity stop celebrating Confederate symbols, educators say the onus is now on Lecce to demonstrate accountability.

Professor Cabrera said he believes if Lecce “recognized what he did was wrong” and took steps to “atone,” he could have room to grow, but suspects Lecce “likely didn’t.”

“Participating in a slave auction is not just an example of acute racism but one has to ask why these people thought it was okay? How racist and historically ignorant does someone have to be to think this is socially acceptable?”

For Barriffe, it underlines Lecce’s “performative” attitude towards his community.

“We’re talking about a frat boy that is trying to maintain power – he’s been using a divide and conquer tactic within the Black community throwing pennies at non-profit organizations … but at the same time they continue to undercut public education by holding back a hundred million dollars.”

“What is scary for me,” Barriffe said, is the way people like Lecce keep “dodging all of these types of things that would sink any other politician – that’s the part that I’m flabbergasted by.”

Update: Following publication, Lecce circulated a statement to other media outlets reportedly apologizing for the “inappropriate” slave auction event. The PC Party of Ontario has not responded to multiple requests from PressProgress seeking a copy of Lecce’s apology.

On Wednesday, the Elementary Teacher’s of Ontario, which represents 83,000 teachers and education workers in Ontario’s elementary schools, issued a statement calling on Doug Ford to take “immediate action” in response to PressProgress‘ reporting that found Lecce “engaged in deplorable anti-Black racist behaviour during his time as a fraternity leader at Western University”:

“His participation in a slave auction fundraiser raises serious concerns about the minister’s understanding of anti-Black racism, and his ability to serve and support students, education workers, and families, particularly those who identify as Black.”

An apology from Minister Lecce that neglects to even acknowledge anti-Black racism is not enough.

Ontarians deserve more from their elected officials. Leaders must work to confront and eliminate anti-Black racism, not perpetuate it. #onted #onpoli https://t.co/xjfyr7Loyy