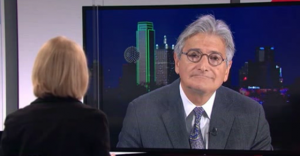 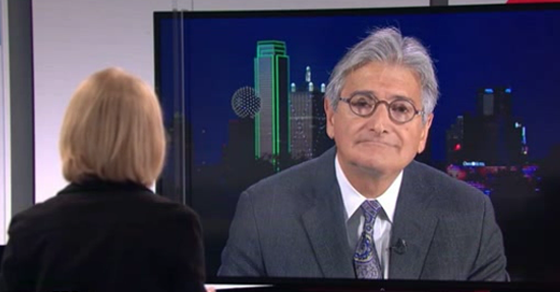 That company's name is Imperial Oil, a subsidiary of oil giant ExxonMobil. And by Exxon's own admission, they've been big funders of climate science denial groups.

Alberta’s new Climate Leadership Plan has received widespread support from the oil industry, but one major oil company has been pretty quiet lately.

That company’s name is Imperial Oil, a subsidiary of oil giant ExxonMobil.

And by Exxon’s own admission, they’ve been big funders of climate science denial groups.

“Exxon has funded a number of organizations that he said have been openly climate change deniers,” PBS host Judy Woodruff put to Cohen. “Has Exxon been funding these organizations?”

Cohen went on to draw a distinction between the groups they fund and the company’s own climate policies.

However, his answer only underlined Exxon’s own history opposing policies aimed at getting climate change under control:

“What we have been engaged in, both — we have been focused on understanding the science, participating with the broader scientific community in developing the science, while at the same time participating in understanding what would be and working with policy-makers on what would be appropriate policy responses to this evolving body of science. That’s why we were involved with large business coalitions challenging the adoption of the Kyoto protocol in the United States. And we then moved to oppose, for example, early adoption of cap-and-trade approaches in the U.S.”

Those groups are key members of the Atlas Network, a global network of right-wing think tanks that also counts Exxon among their top funders.

The Atlas Network’s Canadian chapter includes groups like the Fraser Institute, the Canadian Taxpayers Federation, the MacDonald-Laurier Institute and the Manning Centre among its affiliates – many with documented histories of climate science denial.

Between 2003 and 2004, the Fraser Institute received $120,000 in funding from ExxonMobil according to the Vancouver Sun.

Green was, for a time, a resident scholar at the American Enterprise Institute, where his activities included challenging climate science in Congress and downplaying BP’s Deep Horizon oil spill.