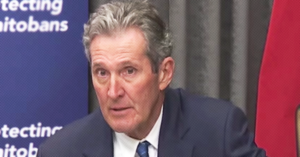 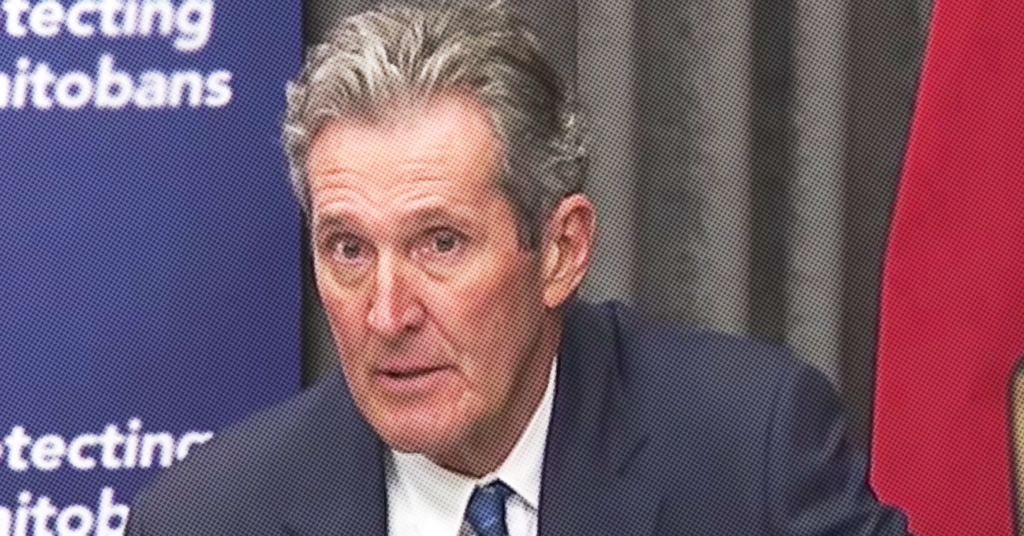 According to a new analysis of the board compositions of Manitoba’s five regional health authorities, 21 out of 59 board members (35%) have ties to Pallister’s party.

The names of many appointees are listed as party donors in Elections Manitoba filings. Other appointees include former party staffers and failed candidates. 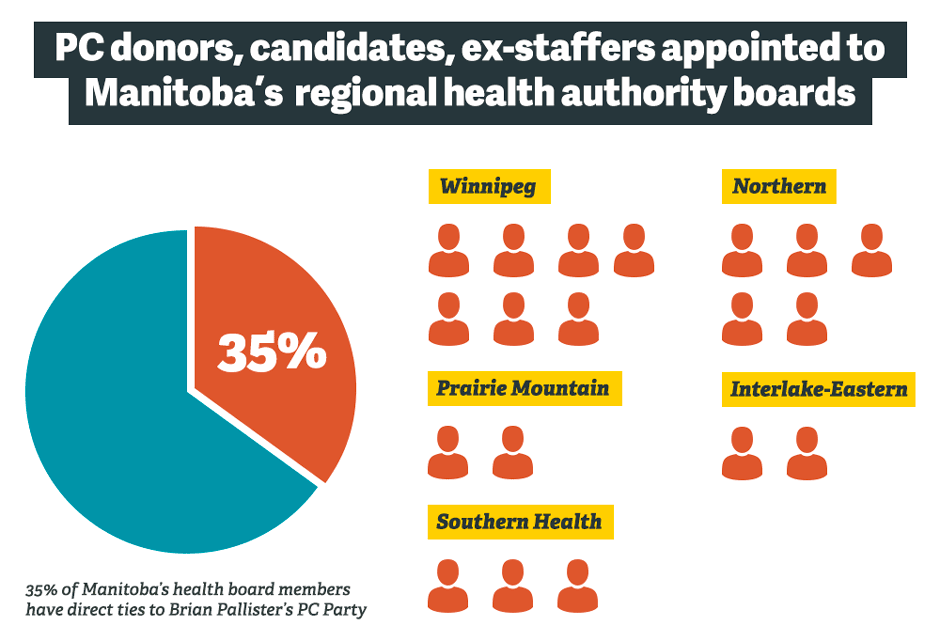 Manitoba’s regional health boards are responsible for directing the management of local health services. Board members are appointed by the Minister of Health to terms that may not exceed three years. Current boards were set in May 2020, well after Pallister’s conservatives came to power in 2016.

Another recent analysis by PressProgress found nine-in-10 of Pallister government health board appointees had no professional expertise in health or medicine. More than half (55%) were drawn from the business sector, including corporate executives and corporate lobbyists.

Together, health board appointees connected to either the business sector or to the PC party represent six-in-10 of all current appointments.

Here’s a closer look at who Pallister’s government has appointed to the boards:

Lauren Stone is a lobbyist with Global Public Affairs who previously served as a policy analyst for Pallister during his time in opposition.

Shannon Stefanson is vice-chair of the WRHA. Stefanson’s name is listed as having contributed $2,050 to the PCs. Stefanson is a sister-in-law of Deputy Premier Heather Stefanson and her husband Grant is the president of Pallister’s Fort Whyte riding association.

Bill Baines is a local businessman with long ties to the PCs. Baines served as COO of the Manitoba Telephone System when Gary Filmon’s PC government privatized the Crown Corporation in 1996. At the time, critics accused Baines of being a “flunky for the government” and pushing the “party line” on privatization. Before Manitoba banned corporate donations in 2000, MTS would donate several thousand dollars to the PCs and Baines himself donated at least $500 to the party.

Dawn Daudrich owns an eco-tourism company and her name is listed as having donated $18,308 to the PC party. The name of Daudrich’s husband, Walter, is also listed donating $19,268 to the PCs. Between 2018 and 2019, six members of Daudrich’s family are listed donating a combined $50,980 to Pallister’s party. Daudrich served as the agent for Flin Flon PC candidate Theresa Wride in 2019.

Wayne McWhirter, the WRHA chair, is listed as a PC donor whose name is listed as contributing $1,012.50 to the party.

Donald Lepp is a senior manager with Canada Post. Records show his name is listed as donating $850 to the PCs.

Jennifer Moncrieff is a former director of sales with the Investors Group whose name is listed as having donated $267.50. Her father is the CEO of Great-West Life and his name is also listed donating several thousand dollars to the PCs.

Lee Jebb is chair of the board and VP at Westcap Management. Records show his name is listed as having donated $2,128 to the PCs.

Gwen Drul has a background in the agriculture industry and her name is listed donating $700 to Pallister’s PCs in 2018 and 2019. Her husband Wayne, who previously served as chair of Agricore United, has also donated $1,485 to the PCs.

Brad Collett is a chartered accountant. Records show his name is listed as having donated $415 to the PCs.

Abe Bergen, the board’s chair, is the president of Kleefeld Developments. His name is listed as donating $1,200 to former Health Minister Kelvin Goertzen’s re-election campaign in 2019. Goertzen appointed Bergen to the board in 2016.

Desmond Leen is a local family doctor. Records list his name as donating $5,778.75 to the PCs, including $250 directly to current Health Minister Cameron Friesen in 2019.

William Osachuk served as the official agent for PC candidate Dennis Smook in 2016 and his name is listed as having donated $2,049 to the PCs.

Kelly Bindle is the former PC MLA for Thompson.  Bindle’s name is also listed as having donated $3,635 to the PCs.

Angela Enright is a failed PC candidate who ran for Pallister in Flin Flon during the 2016 provincial election.

Carrie Atkinson is a local city councillor in The Pas. Records list Atkinson’s name as having donated $400 to the PCs.

Christopher Matechuk has appeared in photo ops with Pallister government ministers and his name is listed as having donated $400 to the PCs.

Glen West, a senior manager with Manitoba Hydro, hosted a “Bud, Spud and Steak” fundraiser for Pallister’s PCs in 2017 and his name is listed as having donated $945.

David Oakley, a local business person, is listed as donating $400 to the PCs.

Hermann Saxler, another local business person, is listed as donating $250 to the PCs.

Four of Manitoba’s five regional health boards did not respond to requests for comment from PressProgress about the political connections of board members. One board, Northern Regional Health Authority, deferred questions to the province — Manitoba’s Ministry of Health likewise did not respond.

Manitoba health advocates say the appointments of party donors and allies is of special concern given the increasing “political interference in decision making in regards to health care and policy decisions.”

“I think one can presume they are more attune to what the government needs and will ensure that that vision is seen to the end,” Brianne Goertzen, Director of the Manitoba Health Care Coalition told PressProgress.

Lynne Fernandez, researcher at the Canadian Centre for Policy Alternatives, said the Pallister government’s appointments of political allies appears to be an effort to “bring everything closer to them so they can control it better.”

“There’s this undermining of the public sector and a slow gradual shifting into the private sector – or at least centralizing control in the government and away from the institutions doing this work,” Fernandez told PressProgress.