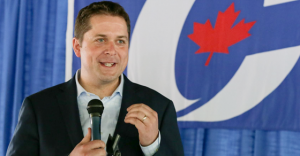 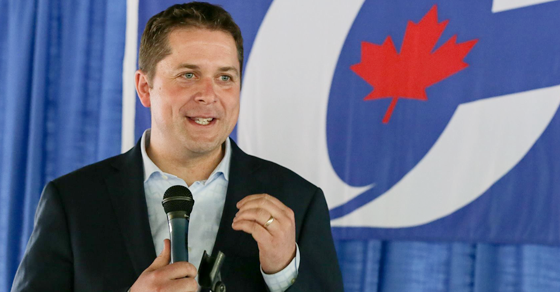 So much for Andrew Scheer's new and improved "middle-of-the-road" Conservatives.

So much for the new and improved “mild-mannered,” “middle-of-the-road” Conservatives.

The Conservative Party of Canada is currently promoting an online petition vowing they’ll strip funding from universities and shut down critical research projects in the name of “free speech” – something anti-abortion figures say would amount to an “enormous victory for pro-life activists across the country.”

Who came up with that Orwellian idea? Thank new Conservative leader Andrew Scheer.

After all, it was Scheer who originally put forward the idea in a bid to appeal to the social conservative base that elected him party leader in May, promising to block research grants and cut Canada Research Chairs if any “forbidden topics” are “silenced, contained and quarantined” on campus.

Some observers predicted Sheer’s idea might be “one of those zany, soon-to-be-forgotten promises” that get “discarded when the race ends.”

It seemed that way too – before the final results of the leadership vote were even announced, all references to Scheer’s controversial, socially conservative policies mysteriously vanished from his website.

Well, now a new petition being circulated by the Conservative Party of Canada on Facebook has resurrected Scheer’s wildly vague and open-ended proposal on “withholding federal grants from all universities that won’t respect diversity of viewpoints.” Channeling their inner-Breitbart, the Conservatives claim they want to fight “political correctness” and “protect free speech,” but Scheer’s past statements on the policy make clear that it is intended to empower anti-abortion activists.

In April, during an interview with a right-wing blogger, Scheer explicitly stated “pro-life” groups would stand to benefit from the policy, something the blog summarized this way:

“And then there’s a policy that, if implemented, would be an enormous victory for pro-life activists across the country: Scheer’s promise to deny federal grant money to universities that refuse to protect free speech. Scheer specifically refers to the treatment pro-lifers have received on campus.”

A month later, Scheer promoted the same policy in a Facebook Live video with Ruth Shaw, head of the National Campus Life Network, who told the Conservative leadership candidate claimed things have gotten so bad, a group she belonged to in 2010 was “arrested on our campus for simply trying to be active pro-life students.”

In fact, the real story is a little more complicated – Carleton University actually offered Shaw’s group a designated area to set-up a display featuring large, graphic images comparing abortion to the Holocaust, including swastikas and graphic photos of dead bodies in concentration camps, but the group ignored the school’s offer and was later arrested for trespassing. If Scheer is willing to strip funding to a Canada Research Chair over this, what else is he willing to do?

In the video, Scheer notes that he thinks it’s a “cop out” to claim universities and student unions are separate entities. Would he be prepared to strip funding from Canadian cancer researchers because an obscure anti-abortion group has a grievance with their student union?

How far is Scheer willing to take all of this?

As Macleans’ Paul Wells observed, Scheer and the Conservatives should probably be “careful what they wish for” – for example, how would Scheer handle evangelical campuses like Trinity Western University?

Trinity Western receives federal research grants and even received millions for infrastructure from the Harper Government, yet the school requires students to enter into a “covenant” that requires students follow a strict “biblical view of sexuality” banning “sexual intimacy that violates the sacredness of marriage between a man and a woman.”

Would Scheer strip funding from Trinity Western too?

Maybe he can let them know next time he stops by to pay his supporters a visit?