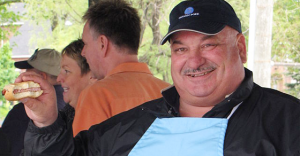 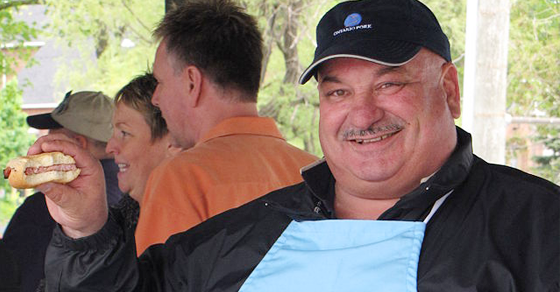 Say hi to Larry Miller, a Conservative MP who once told Muslim women to "stay the hell where they came from," warned of communist revolutions and claimed the long-gun registry was just like "what Adolph Hitler tried to do in the 1930s."

The Conservatives have a new Deputy Public Safety and National Security critic.

Say hello (again) to Larry Miller, a Conservative MP who once told Muslim women to “stay the hell where they came from,” warned of communist revolutions and claimed the long-gun registry was just like “what Adolph Hitler tried to do in the 1930s.”

As the Owen Sound Sun-Times reports:

What experience does Miller bring to this important job?

Miller – referred to by colleagues as the keeper of the Conservative flame and the “voice in Harper’s ear” – is known for his calm, cool demeanour and diplomatic tact in approaching sensitive matters.

Last year, for example, Miller apologized for stating on an Owen Sound radio station that Muslim women should “stay the hell where you came from” if they decide to wear niqabs in Canada.

Keeper of the Conservative flame MP Larry Miller tells niqab wearers to “stay the hell where they came from”. Yikes. https://t.co/9zihWcc1Y3

During his bid for re-election last year, Miller tweeted about a “significant document” that was captured during the First World War that purports to show the warning signs that a communist revolution is imminent: Those warning signs include:

• Corrupting the young by getting them “interested in sex” (possibly with “sexy books” or a night out at the theatre);

• “The breakdown of the old moral virtues, honesty and sobriety”;

• “The registration of all fire arms.”

And to elaborate further on the last point, the “significant document” alleges the communists will “cause the registration of all fire arms on some pretext with a view to confiscating them and leaving the population helpless.”

But according to a 1970 report in the New York Times, FBI Director J. Edgar Hoover once testified that the “significant document” in question is a complete hoax.

Miller added that the registry was a plot aimed at “the social re-engineering of Canadians” which “is what Adolph Hitler tried to do in the 1930s.”

Miller apologized for those comments too.

“I am honoured to have been named as the deputy critic for public safety and national security,” Miller said in a news release to the Sun-Times.

Miller says he plans on “holding the government to account on issues related to this very important file.”