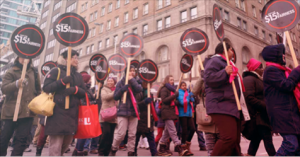 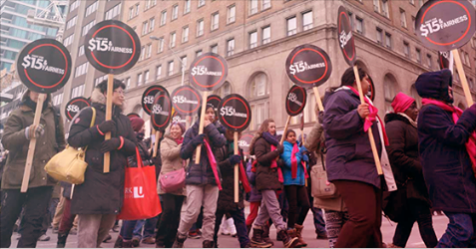 A minimum wage increase is coming in Ontario, and a group of prominent Canadian economists are giving it their full support.

Ontario will become the second province to raise its minimum wage to $15 an hour joining Alberta and American cities such as Seattle and Minneapolis (which passed new minimum wage legislation on Friday).

In a recent open letter, some 53 researchers and academics from across the country argue that the new minimum wage will greatly benefit workers ‒ adding that the usual warnings of economic doom and gloom are out of line with the latest research.

Moreover, they point out, a minimum wage hike for Ontario workers is long overdue:

“Today, Ontario’s minimum wage is $11.40 per hour. Adjusted for inflation, this is barely one dollar higher than its value in 1977. Yet over the same four decades, the average productivity of workers has increased by 40%. And the prevalence of minimum wage work is spreading. Around 1 in 10 Ontario workers make minimum wage today, with a large increase in this proportion over the last two decades.”

The signatories also note that the stereotype of minimum wage workers as teenagers living at home is out of sync with reality:

The same holds true across Canada as a whole.

In fact, Statscan’s 2015 Labour Force Survey suggested that less than a third (32%) of all minimum wage workers in Canada were between the ages of 15-19 and living with their parents Unsurprisingly, the usual suspects and special interests have come out against giving Ontario’s lowest-paid workers a raise.

“You reduce entry level jobs. You stop…young people, especially, from being able to get into the workforce in the first place. There’s only so many bucks out there. And the private sector’s only got so much capacity to create jobs.”

However, say the economists, these claims ignore findings from the latest research on the effects of raising the minimum wage ‒ who note that “the weight of evidence from the United States points to job loss effects that are statistically indistinguishable from zero.”

A report published last year by the US-based National Employment Law Project which examined some 70 years worth of data found no correlation between minimum wage increases. In fact, researchers found that in the majority of cases, the overall employment level actually went up following a federal wage increase.

Even more recently, a team of economists from the University of California Berkeley concluded that coming minimum wage hikes will lead to a “major improvement in living standards” and will ultimately have a “positive effect on employment.”

Why does the research seem to fly in the face of the doom and gloom we’re so used to hearing around the idea of raising the minimum wage?

To put it simply, because what happens when minimum wages rise isn’t the binary tradeoff presented by some business lobbyists and right wing economists.

As the economists write in their letter: