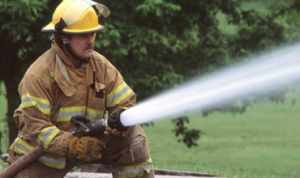 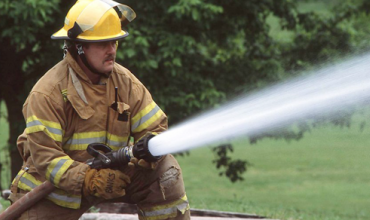 “Misleading” Fraser Institute report on firefighters goes up in smoke

Firefighters are pouring cold water on a “misleading” new report from the Fraser Institute.

“Even if there are fewer fires,” he pointed out, “with fewer fire department resources available, the fires that do occur would grow more quickly and become larger and more dangerous.”

The Fraser Institute’s report on “municipal fire services in Canada” questions the “role of fire services personnel and the extent to which their work is providing value for money.”

And to emphasize just how well they understand the “value” firefighting work, the Institute includes a cartoon showing a firefighter spraying dollar bills and little gold coins at a raging fire:

“Taxpayers are paying for more firefighters to fight fewer fires,” the Fraser Institute’s authors say in an accompanying opinion piece published in The Vancouver Province.

But do “taxpayers” actually pay for all of these firefighters? According to the Fraser Institute’s own report: no.

As a footnote in their report indicates, they actually count all firefighters “who might work in the public or private sector” — including, for example, private oil field or wildland firefighters:

Even stranger, although Fraser Institute cites the Ontario Fire Marshal’s stats on fires, they cite a different source (Statistics Canada’s Labour Force Survey) for their numbers on firefighters.

According to the OFM, Ontario only has 11,122 full-time fire fighters — that’s 20% lower than the 14,000 or so number of firefighters Fraser Institute cites from data that combines private and public firefighters.

2. Firefighters do things other than just fight fires

And it’s not clear why the Fraser Institute thinks the number of fires is the best way to determine the budget of your local fire department?

Fraser Institute’s own report admits firefighters do a lot more than just fight fires: “of course the role of fire services extends beyond that of simply fighting fires,” the report says. “Firefighters also respond to medical emergencies and motor vehicle accidents, and assist police in their inquiries.”

And again, their own report found only 9.9% of Toronto Fire Department’s calls in 2013 were related to actual fires — meaning some 90% of their time was spent responding to other kinds of emergencies. Not only that, their own report shows the number of fire-related calls decreased by 15.3%, the number of non-fire related calls increased over the same time period by 23.5%.

IAFF Canada also points out firefighters dedicate time and resources to “training, prevention, public education, inspections and pre-fire planning,” all of which helps reduce the number of fires. They say fire department budgets “should be determined through a proper risk analysis by fire service experts in consultation with the public and business owners whose safety, property, livelihoods and insurance rates stand to be affected by the degree of frontline resources available.”

3. Fraser Institute tried to pull the same trick on the police

It seems a little strange Fraser Institute would go after firefighters given what happened after they published a similar study about police service in 2014 that concluded there are “more cops despite less crime.”

“The value of what our members do cannot be solely measured against reported crime statistics,” added the Police Association of Ontario in a release responding to the Fraser Institute. The report was also criticized by police officials in Calgary, Alberta,  Winnipeg, Manitoba, Regina, Saskatchewan,  Saint John’s, Newfoundland, Windsor, Ontario, Thunder Bay, Ontario , Niagara Falls, Ontario and Saint John, New Brunswick.

“The value of what our members do cannot be solely measured against reported crime statistics,” added the Police Association of Ontario in a release responding to the Fraser Institute.

And the Victoria Times-Colonist’s editorial board questioned the underlying assumptions of the Fraser Institute’s report, asking “does a lower crime rate mean fewer police officers are needed? Or could it mean the police officers are doing their job?”

It also didn’t help when Fraser Institute was forced to retract their claim that Peterborough’s police force is grossly over-staffed: