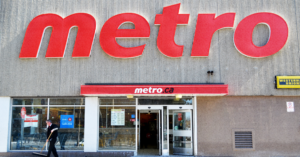 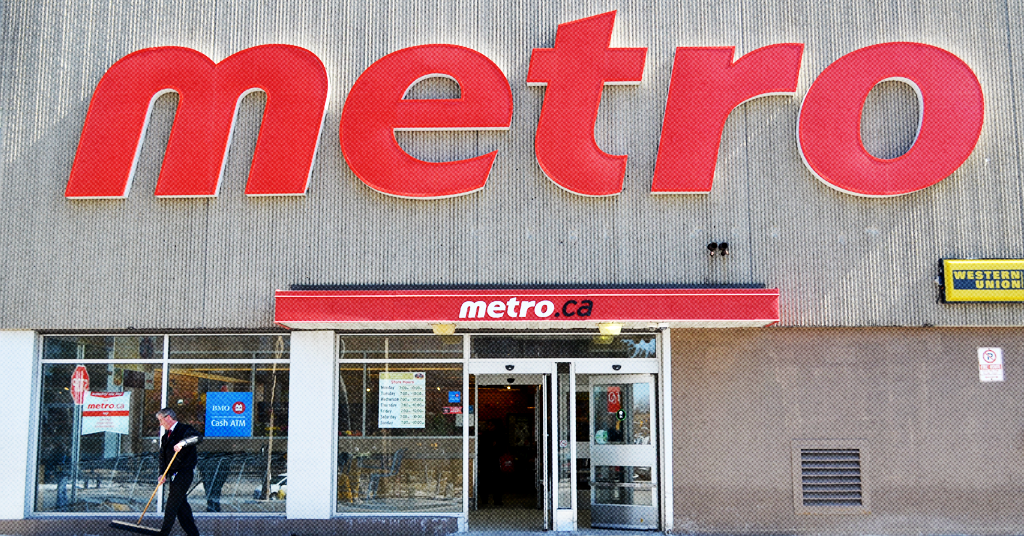 Metro grocery stores has dropped a policy instructing workers to get a doctor’s note if they think they’re developing COVID-19 symptoms and need to “self-isolate.”

“Things have evolved a lot,” a Metro spokesperson told PressProgress.

Metro was responding to an internal memo obtained by PressProgress that offered instructions to workers that, in some cases, appeared to contradict advice from public health authorities.

Public health authorities have warned the public that one of the biggest dangers during the coronavirus pandemic is that a sudden spike of illnesses could overwhelm Canadian hospitals and healthcare resources.

Despite these warnings, the Metro memo showed the company told its workers to “go to the hospital” and “immediately consult with your healthcare provider” if they think they may be developing symptoms consistent with COVID-19.

The memo, dated February 11, instructed workers to send “medical documentation” indicating whether they are healthy to work.

Metro also told workers they could only “self-isolate” after receiving “confirmation” from a doctor that they have COVID-19, contrary tocurrent advice from public health authorities.

“When would I need to self-isolate / stay-at-home?” the memo asks. “Following your healthcare professional’s confirmation that you have 2019 Novel Coronavirus infection and do not need hospitalization and can receive care at home.”

Metro’s spokesperson verified the authenticity of the memo, but suggested its contents did not reflect the company’s current policies as of Sunday, which they admitted are shifting as the “situation changes.”

Metro confirmed to PressProgress workers no longer need to provide doctor’s notes or medical documentation. They did not specify when or why it changed its policy. 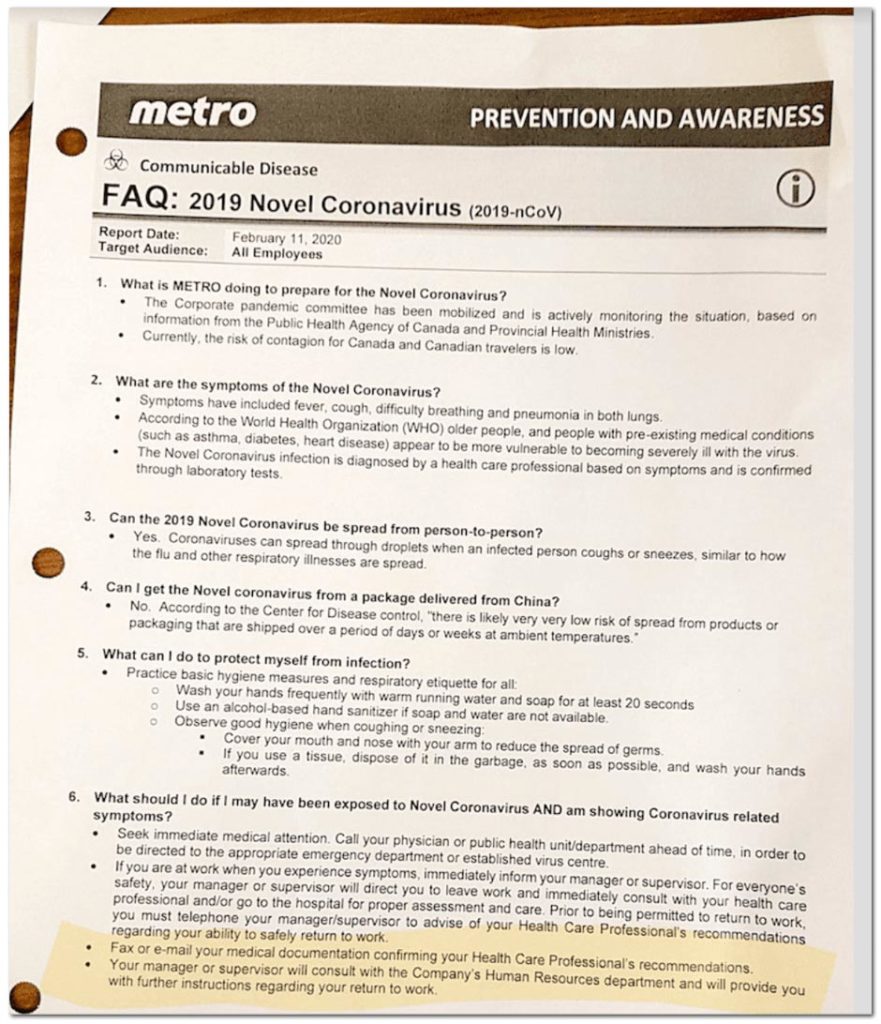 Metro’s internal memo to “all employees” obtained by PressProgress 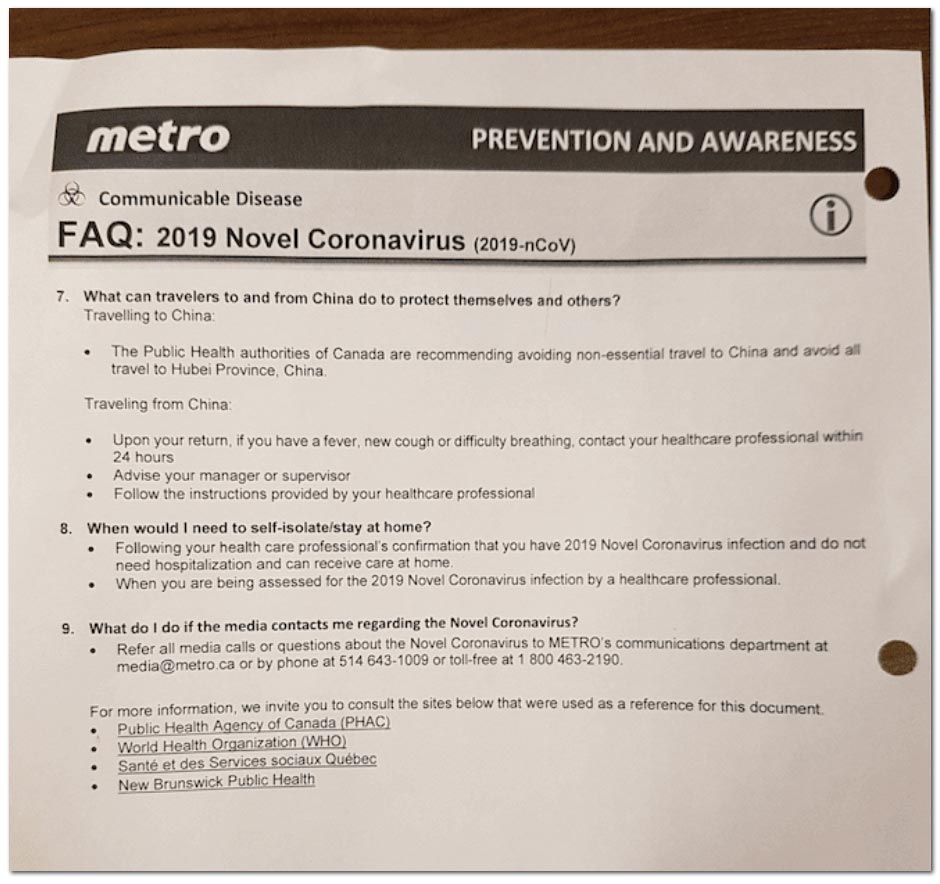 Metro’s internal memo to “all employees” obtained by PressProgress

The memo raises questions about how well-informed Canadian employers are about the public health emergency — even if some may be trying to do the right thing.

Restaurants Canada, a fast food lobby group, revised information it shared with its members advising that food handlers with coughs and runny noses can still work during the pandemic. This weekend, Tim Hortons announced it issued a “company-wide directive” asking all restaurants to stop requiring doctor’s notes after the company faced a backlash over sick leave policies at some franchises.

Tim Deelstra, a spokesperson for UFCW local 175 which represents grocery store workers at Metro’s Ontario locations, told PressProgress his union has been “regularly in touch” with the company raising health and safety concerns.

“They’re not requiring medical notes from any employee at this point,” Deelstra confirmed. “The doctor’s note requirement is something that, even prior to this, we as a union have been opposed to — the idea of mandatory doctor’s notes.”

Canadian grocery store workers, many of whom are also minimum wage workers, now find themselves providing essential services in a public health emergency.

“When you have people standing at the till handling items and they’re having a reasonably big influx of people, then obviously it raises concerns about their percentage of chance of contracting something.”

“These are things that we’ve raised with the employer,” Deelstra said. “We want to find avenues for cashiers or clerks or whoever that is working in the store to do that as safely as possible.”

Deelstra said both the union and employers, including Metro and Loblaws, are now encouraging people to look at “alternate systems” like ordering online to help “reduce the amount of people that are going in to stores.”

Metro issued a statement Monday morning on new “preventive measures” to “ensure the safety of our employees and customers.”

Metro’s statement advises workers to “stay home if they feel sick or have any of the symptoms related to the COVID-19 and not come to work” and “isolate themselves at home to protect the health and safety of those around them.”

Metro’s spokesperson confirmed to PressProgress this means no doctor’s notes: “if they feel sick or have any of the symptoms, they stay home.” Workers should simply “contact their manager to inform him or her of their situation.”

On Sunday, the Ontario government announced it would introduce new legislation banning employers from requiring doctor’s notes during the pandemic.