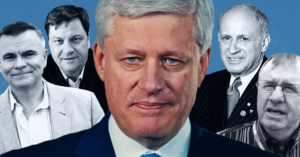 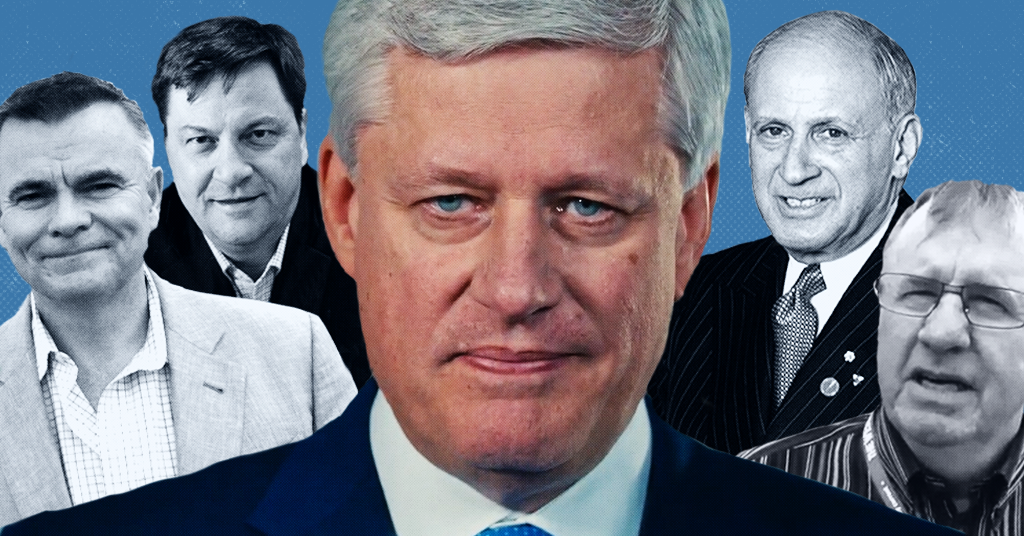 Meet the Powerful Elites Who Control the Conservative Party’s Money

Conservative Fund run by former lobbyists for Irving Oil, big tobacco and the leader of a global network of right-wing political parties

Who really calls the shots at the Conservative Party of Canada?

The recent resignation of Conservative leader Andrew Scheer following revelations he used donor money to send his children to elite private schools has focused the public spotlight on a little known entity called the Conservative Fund.

The Conservative Fund, a non-profit entity that collects donations and disburses funds to the Conservative Party of Canada, serves as the party’s fundraising arm.

Scheer’s private school expenses were drawn from the secretive Conservative Fund — and apparently without the knowledge of the fund’s powerful board of directors.

According to Maclean’s, Scheer announced his resignation as leader shortly after senior party officials were asked if the Conservative Fund was paying for Scheer’s private school expenses.

The Conservative Fund’s directors are apparently so powerful, they also reportedly ordered the firing of the party’s executive director after details about Scheer’s private school expenses became public.

But who exactly sits on this all-powerful board? Here’s the list:

Louis Leger is a former lobbyist for Irving Oil, the oil company owned by a powerful family dynasty that controls much of New Brunswick’s economy.

Leger recently denied the Conservative Fund had any knowledge of Scheer’s private school expenses, telling the Globe and Mail: “There was no discussion of private school funding.”

Power, a former big tobacco lobbyist for Rothmans, Benson & Hedges Inc, is a longtime Conservative insider in Newfoundland and Labrador.

Power recently served as vice chair of the Atlantic Institute for Market Studies, a right-wing think tank that merged with the Fraser Institute last month.

Power once spearheaded a business lobby group in support of the controversial Muskrat Falls energy development, a project which would later run several billion dollars over budget and later be described as “the biggest economic mistake in Newfoundland and Labrador’s history.”

Semple, a major donor to the right-wing Saskatchewan Party, is co-owner of the Brandt Group, a major group of companies with assets in real estate, construction and agricultural products.

In 2007, former Sask Party Premier Brad Wall appointed Semple to help run Enterprise Saskatchewan, an organization described by the Canadian Centre for Policy Alternatives as “the primary nexus for corporate-government interaction in our province.”

Semple’s business activities have lately been a source of controversy in Regina as critics accuse his company of skirting permit regulations and public consultations to build a commercial office tower in Regina’s Wascana Park.

Bay Street banker John Prato is a top executive with TD Securities, where he focuses on “investment opportunities between Canada and the United States,” as well as “developing energy opportunities in both the upstream and downstream.”

Prato previously served as Consul General of Canada in New York, an appointment made by Stephen Harper, where he faced scrutiny after it was discovered that then-government leader John Baird crashed for free at Canada’s official residence during a personal vacation trip to the big apple.

Prato also sits on the board of Chobani, “manufacturer of America’s #1 Greek yogurt.”

A board member with a number of respected Toronto institutions, including the Art Gallery of Ontario and Mount Sinai Hospital, Frum frequently makes headlines over her provocative use of Twitter.

In one 2014 controversy, Senator Frum tweeted that Elections Canada should not encourage people to vote.

Gerstein, another Harper-appointed ex-senator and the Conservative Fund’s Chair, says he proudly self-identifies as a “bagman.”

Gerstein has also sat on the board of directors of a number of major corporations, including the Atlantic Power Corporation, Confederation Life Insurance and Peoples Jewellers, among others.

Gerstein’s work with the Conservative Fund has sometimes seen the self-described “bagman” have an occasional brush with the law.

In 2011, Elections Canada charged Gerstein and three other Conservative officials with submitting “false or misleading” expenses documents. Charges against Gerstein were dropped as part of a plea bargain.

Gerstein, as Chair of the Conservative Fund, was also a key figure in the Mike Duffy expense scandal — although he was questioned by the RCMP, Gerstein avoided an investigation by the Senate ethics officer and did not have to testify at Duffy’s trial.

Harper, who as recently as last year suggested he could “easily” become leader again if he wanted his old job back, continues to wield influence over the party through the Conservative Fund by controlling the party purse strings.

According to the Toronto Star, sources close to Harper suggest he was “furious” over Scheer’s private school expenses.

Harper currently serves as chairman of the International Democratic Union, a global network of right-wing political parties, ranging from the centre-right to far-right.

The IDU is based in Munich and housed in the party headquarters of the Bavarian Christian Social Union, a regional social conservative party and a junior partner in Germany’s governing coalition. The CSU has taken aggressive positions on refugees and immigration.

Harper himself stirred controversy in 2017 when, as leader of the IDU, he warmly celebrated the election of the Hungarian far-right leader Viktor Orban.