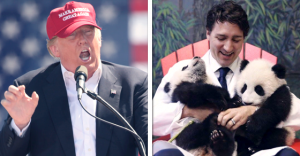 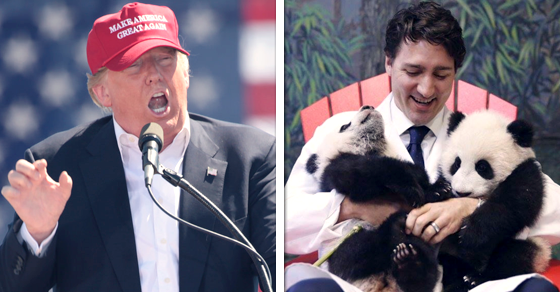 “Meanwhile in Canada,” Canadians are forgetting Canada has its own problems with racism

some Canadians have gotten the false impression that everything's perfect up here at home.

Some Canadians seem to be glossing over Canada’s own problems with racism lately.

With chaotic events outside our borders – from Donald Trump’s blatantly racist and bigoted statements to the xenophobia that surfaced during the Brexit campaign – some Canadians have gotten the false impression that everything’s perfect up here at home.

Anyone on social media lately might have noticed the “Meanwhile in Canada” meme: usually in response to something terrible happening elsewhere in the world, Canada is shown as a peaceful paradise where Canadians only deal with minor, trivial problems as an exaggerated contrast. Oh, and Justin Trudeau usually makes an appearance too.

Taking these images at face value, you’d think Canada is a multicultural paradise that doesn’t have issues with racism ingrained in attitudes and insitutions as they’re found in other countries: from racialized policing, to poverty, to the regular stream of ugly racist incidents that seem commonplace in the United States. Foreign journalists sometimes play this game, as well.

But here’s the problem: even though we may embrace and celebrate its diversity more than other countries, all of these problems still exist here in Canada.

Let’s stop and think about a few facts you won’t find in the latest “Meanwhile in Canada” meme:

Meanwhile in Canada, racism is still a big problem in Canada’s policing and justice systems

“I came down to the wharf just to do some reading & just to spend some nice quiet time by the wharf” https://t.co/u3MtDPJSbM #cdnpoli

According to a 2014 report issued Canada’s Correctional Investigator, between 2005 and 2015 Canada’s prison population grew by 10%.

In fact, almost a quarter of Canada’s total prison population is Aboriginal, despite Aboriginal Canadians representing only 4.3% of the population, and the incarceration rate for black Canadians is “three times their representation rate in general society.”

There are also the well-known instances of black Canadians commonly being subjected to random police “carding” checks. Not to mention cases of police shooting black men like Andrew Loku and Jermaine Carby dead for no particular reason with the officers involved rarely facing subsequent disciplinary action.

Poverty in Canada is highly racialized, and that’s thanks in large part to Canada’s legacy of colonialism and residential school system.

After a recent fire at the Pikangikum First Nation killed six adults and three small children because the community lacked the prevention infrastructure it needed, Chief Isadore Day said these kinds of tragedies are “typical across all First Nations that are living in Third World conditions.”

Indigenous children at more than twice as likely to grow up in poverty than non-indigenous kids, with 60% on reserves living below the poverty line.

The Toronto Star recently reported 41% of children and young in the care of the Children’s Aid Society of Toronto are black, despite black youth only representing 8.2% of Toronto’s under-18 population. Indigenous children are also severely over-represented in foster and group-home care.

Meanwhile in Canada, examples of everyday racism are still quite common

“Meanwhile in Canada…” tweets erase the violence Black/First Nations people experience daily in the land north of the United States.

“Meanwhile in Canada,” some Canadians seem to be forgetting that what happens south of the border happens up here as well.

While the United States has seen a rise in hatred directed at Muslims – examples of a pregnant, hijab-wearing woman having racial slurs shouted at her on the street; violence and vandalism directed at Mosques; a taxi driver assaulted by a passenger who falsely believed he was Muslim – some want to frame similar incidents in Canada as rare exceptions rather than part of a dangerous pattern.

Consider the following examples that all happened in Canada during the past year alone:

• a man passing on a bicycle pepper-sprayed Syrian refugees at a welcome event in Vancouver;

• a Somali-Canadian man living in Waterloo was told by an employer he was unsuitable for a position because of his cultural background’s “resistance to authority”;

• a black man in Bathurst, New Brunswick was accosted by police for reading on a wharf;

• a Muslim woman in Toronto was attacked and called a “terrorist” while picking up her kids from school;

• an Ottawa woman wearing a headscarf was verbally abused outside a Wal-Mart and told to “go back to her own country”;

• a vehicle in Windsor was vandalized and had racist language written on it;

• a Muslim school in Ottawa was spray-painted with racist phrases including “Die Bombers” and “ISIS Go Home”;

• a freely distributed newsletter in Toronto with a 300,000 circulation is currently under investigation for featuring anti-Semitic caricatures.

Not to mention, Stephen Harper’s 2015 election campaign was widely described as racist and xenophobic by the international press.

Like it or not, Canada: ignoring or minimizing the problem isn’t going to make it go away.